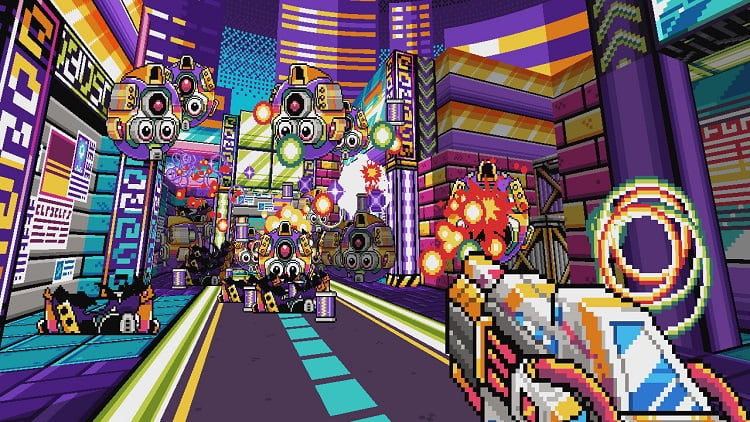 Mala Petaka runs on GZDoom (an extended engine of classic Doom adapted for modern operating systems), but it doesn’t look like id Software’s dark shooters with its bright pixel art and chiptune soundtrack at all.

Portals are also a hallmark of Mala Petaka, the implementation of which in PC Gamer is called the best since Portal. They render the opposite side in real time and are skillfully used in the battle with one of the bosses.

The levels of Mala Petaka themselves are non-linear and diverge from a central location that allows you to move between zones. There are six difficulty settings to choose from, from extremely easy to instant kills.

In addition to fast-paced Doom-style gameplay, Mala Petaka offers a number of bonuses (freeze, rage, invulnerability) scattered throughout the arena and an alternate fire mode for each weapon.

As for the plot, Mala Petaka (bad luck or disaster in Indonesian) proposes to become an evil humanoid who has lost his memory, who intends to regain memories by killing the aliens and their drones.

Mala Petaka was first introduced in October 2021 and currently does not even have a tentative release date. The Steam demo includes three levels versus one in the itch.io trial edition (came out in January 2022).

FIFA 23: Trivela shot toned down in the latest update