The first victory of Barkom-Kazhana in the Polish Plus League 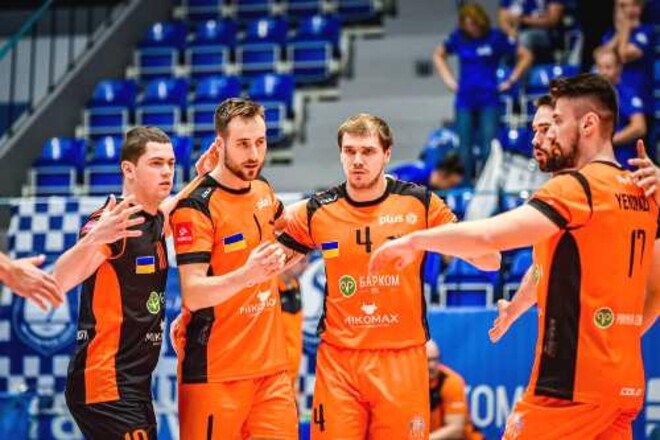 Today volleyball players of the Lviv club “Barkom-Kazhany” played their seventh match in the championship of Poland. In Krakow, they hosted one of the strongest Polish teams, a multiple participant in European cup tournaments, the Skra team from the city of Belchatow.

The key episode of the first game of this meeting took place with the score 7:6 in favor of the Ukrainians. Nominal guests here managed to take four points in a row and have already taken the lead 7:10. Further, this small advantage was quite enough for the Poles to maintain their leadership. They were constantly ahead by 2-3 points almost until the very end of the set, which eventually ended with a score of 22:25.

The second game was held with varying success – then one team came forward, then the other. Everything was decided in the last minutes. With the score 22:22 Lviv won the next two draws and earned a double set point. On the second attempt, “Barkom” achieved his goal, winning 25:23.

The third set also turned out to be very stubborn. The Ukrainians were more often in the lead with a minimal margin, but the Polish volleyball players were constantly catching up with their rivals. In the middle of the game Ugis Krastiņš’ wards managed to make a small lead and from the score 13:13 of the story 16:13. The guests immediately took a timeout, closing the gap 16:15. Then on the site there was an equality of 18:18, 20:20, 22:22. As in the second game, Lviv again took two points in a row 24:22, and then won from the second set point 25:23.

Remembering that the Ukrainians lost 2-3 in the current Plus League three times already, I really did not want a repeat. Moreover, our team lost the fourth set in all respects. Before the count of 10:11, there was still a struggle on the site, and then Skra began to quickly move away – 10:16, 12:19, 13:22 and 16:25.

So again, the Lviv team expected a tie-break. This time the Ukrainians started well in the fifth set, leading 3:0, 5:3, 7:4. And although the Poles managed to equalize the score 7:7, the leader went to change sides “Barkom” 8:7. In the second half of the shortened game, the Lviv volleyball players did not give up their advantage, leading 11:8, 13:10 and 14:11. The opponents were not going to give up without a fight and two match points played 14:13. And yet luck was on the side of the Ukrainian club that evening. Jonas Kvalen brought the first victory in the tournament to “Barkom-Kazhany” 15:13 and 3:2 with an accurate blow.

The famous Serbian diagonal Aleksander Atanasevich (30) scored more points than the other guests.

Thus, after 7 rounds, Barkom-Kazhana had 6 points and the Ukrainian club moved up to 13th place in the standings.

In the 8th round, the Lviv team on Saturday November 5 will play on the road with the team “Charny Radom”.

A month after its name change, Square Enix Montreal (Hitman, Lara Croft) closes its doors and goes to work on an Xbox game

COD Modern Warfare 2: the new gadget has become the nightmare of campers

Pokémon: A 400 dollar scam, a policeman caught in the bag!

YouTube will provide unique identifiers for each channel, choose yours!