One of the Twitter users shared photos of a huge white printed circuit board of the flagship video card GeForce RTX 4090 HOF from Galax. This is the first among the known accelerators with two 12+4-pin 12VHPWR power connectors at once, capable of transmitting up to 1200 W of power to the video card. 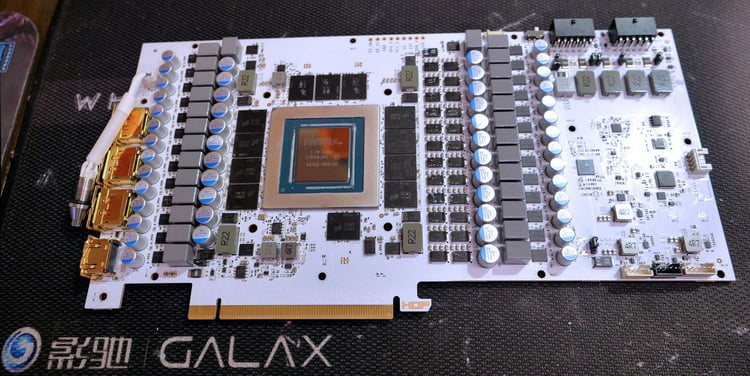 A series of video cards Hall of Fame from the company Galax expects serious replenishment. Based on the AD102-300 GPU with 16,384 CUDA cores, equipped with 24 GB of GDDR6X memory, the new product received a very powerful 32-phase VRM power subsystem with a 28 + 4 scheme. You will not find such a VRM in any of the versions of the GeForce RTX 4090 presented so far from any other manufacturer. A similar power scheme was used in the flagship of the previous generation Galaxy GeForce RTX 3090 Ti HOF. True, then the number of power phases was four less (24 + 4).

At the top of the huge circuit board Galax GeForce RTX 4090 HOF, you can mark points for monitoring the power of the video card. In addition, the “Overclocking” button hanging on the wire is striking, which is responsible for loading the vBIOS for extreme overclocking of the accelerator using liquid nitrogen.

It is very likely that Galax has not yet completed the development of the video card and the accelerator is not ready for sale. The company often sends video card boards to selected enthusiasts for testing, while at the same time developing the necessary standard cooling systems for the accelerators. However, the latter are usually not used by overclockers for extreme overclocking using liquid nitrogen.

Flash game site Miniclip has officially closed its servers, except for 8 Ball Pool and Agario