War Thunder is on fire! The new update brings, among other things, flame tanks and flamethrower boats.

Gaijin Entertainment presents the new update “Fire and Ice” for the online vehicle combat game War Thunder, which is already available for the players.

It expands the game with Finnish air and ground vehicles (including the infamous BT-42 tank), dozens of other tanks, ships and aircraft such as the modern US main battle tank M1A2 SEP with the TUSK upgrade kit, the legendary Japanese battleship Fuso, the latest Russian anti-aircraft system 2S38 “Derivatsia-PVO” as well as two new maps – “Arctic” and “Rocky Canyon”.

The British Churchill Crocodile is one of the most famous flame tanks in history. It is based on the Mk.VII variant with a 75mm gun and excellent armor, but is additionally equipped with a flamethrower powered by a fuel trailer mounted behind the tank. 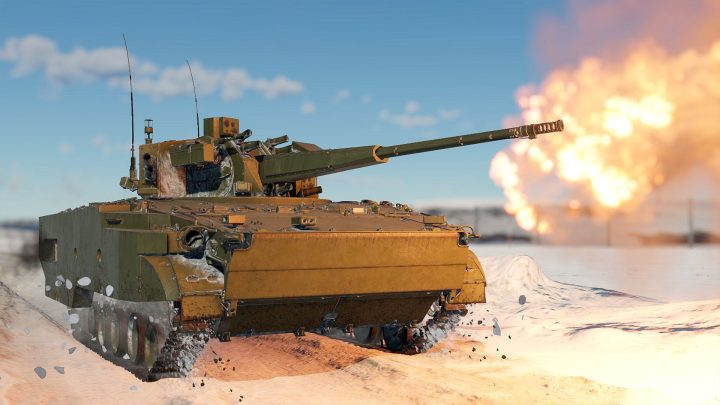 Thanks to this trailer, the Churchill Crocodile has the most bursts of fire among the tanks and is also the longest tank in the game. Also making its debut in the game is the American flamethrower boat Zippo, which was developed from the LCM(6) landing craft during the Vietnam War. The flamethrowers, located on the sides of the bow, are a brilliant hand-to-hand combat tool.

Spectacular conflagrations in the jungle can also be ignited by the A-1H Skyraider carrier-based attack aircraft, which has napalm bombs in its arsenal. These three vehicle models will be available as prizes for the new Battle Pass season with the release of the Fire and Ice update.

Flame Tanks are effective in roughly the same situations as the Napalm Bombs introduced earlier in the game. The flames will not harm the crew of a heavily armored vehicle, but light vehicles are extremely vulnerable: the incendiary mixture will instantly eliminate the crew in open combat compartments and set the equipment on fire.

Flame Tanks fire wide, pressurized beams of fire in a curved trajectory that can hit the enemy from behind small cover opportunities. Also, ground vehicle wheel wells can now be ignited by napalm, causing the player’s tank to look like hell after driving through a burning pool.

The battleship Fuso entered service with the Imperial Japanese Navy in 1915, was extensively modernized between the wars and saw action in the Battle of Leyte Gulf, the largest naval battle of World War II. This late version of the Fuso is the one that has now made it to War Thunder. The ship’s main guns are six twin 14-inch cannons, spaced evenly throughout the ship’s deck. Good aiming angles and no less good ballistic characteristics of the Fuso allow it to inflict colossal damage on the enemy.

The 2S38 “Derivatsia-PVO” is an anti-aircraft system with a 57 mm gun on a converted BMP-3 chassis. The first prototype was presented in 2018. The unmanned turret includes automatic air target tracking, a laser range finder, a coaxial machine gun, a laser warning sensor and a thermal imaging system… With the APFSDS ammunition, the 2S38 can even fight tanks if you can surprise them on the flank.

Hideo Kojima, actress Shioli Kutsuna is part of the cast of the new game

CoD: Modern Warfare 2: Record launch on Playstation, more sales than ever before

Hogwarts Legacy: a rich showcase dedicated to gameplay prepares us for the magical atmosphere of the game

Microsoft: Call of Duty will not be taken away from PlayStation players