NASCAR: Ross Chastain surpasses everyone leaning on the wall! “I did it on Gamecube”. Fernando Alonso applauds 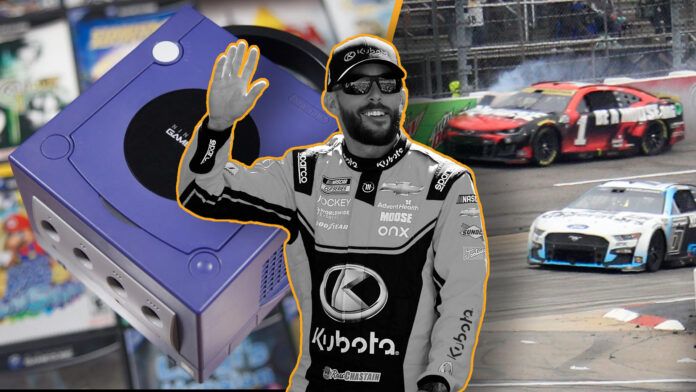 NASCAR driver Ross Chastain managed to take fourth place on the final lap of the Xfinity 500 at Martinsville Speedway, an 847-meter oval located in Virginia. But what does this result have to do with Gametime? Simple: the American driver managed to overtake six cars with a maneuver that will go down in history. Ross Chastian has in fact taken the last curve in support, thus replicating what he did on NASCAR 2005 for Nintendo Gamecube.

The driver, in the last lap of the Xfinity 500, in fact faced the last corner, crashing into the wall and damaging the car. By doing so, the driver was able to keep the throttle open while maintaining a very high speed compared to the competition who, on the other hand, kept the internal line fighting with 1500kg cars and worn tires.

Suffice it to say that on average the drivers do not exceed 120km / h in that curve, even dropping below 100km / h. This equates to lateral accelerations of approximately 2.1G, which is twice the force of gravity. Ross Chastain did not brake, meaning the rider maintained an average speed of at least 180km / h, with an estimated lateral acceleration of 5G.. Something unthinkable for a Stock Car e with forces much closer to what we are used to seeing in Formula 1 or in the Prototype championships (LMP1, LeMans Hypercar).

A risky move but which allowed the driver to finish in fourth position and qualify for Championship 4or a small circle of drivers who will compete for the title in Phoenix. The maneuver also allowed him to achieve the fastest lap of the track, with a sensational 0: 18.8. A crazy maneuver, reckless and considered impossible by many but which allowed Chastain to be able to play the title. Sure, this totally destroyed the car, but… it was an acceptable sacrifice.

“I played a lot of NASCAR 2005 for the Gamecube with my brother, and you could get away with similar maneuvers there. I didn’t know if it would actually work. I mean, the last time I did something like this was when I was 8, ”the pilot explains to NBC. The maneuver has also caused a great stir abroad, so much so that it has arrived here in Europe.

There was no lack of praise from other pilots. The competitors were stunned and excited by Ross’s maneuver, and a certain Fernando Alonso complimented the driver. “This is the best thing of 2022 in motor racing. We’ve all done this in video games with damage disabled. I never thought it would become a reality ”, explains the two-time Formula 1 World Champion.

Other pilots have instead made fun of it. Haas driver Chase Briscoe threw a dig at the iRacing.com team. The pilot attempted the same maneuver 10 years ago but was banned because it was deemed incorrect. A decision not so senseless, in reality, so much so that the federation itself is considering whether or not to ban such maneuvers. In short, both Ross Chastain and Pecco Bagnaia have extracted the best from the video game to manage situations at the limit in reality.

This is the best thing of 2022 in motor racing !
We all did this on video games with damage disable. Never thought this could become reality 👏🏻👏🏻👏🏻👏🏻 https://t.co/UOsfyxox7E

I got banned on iRacing for doing it about 10 years ago 😂, it for sure works on there.

Nantes. Snigur beat the Russian on the way to the quarterfinals

The Last of Us (HBO): The first season will air in January

just look into the eyes Know who will have heart disease?