Halloween is over and Christmas is casting its shadow. For the big streaming providers, this means taking a deep breath, because Netflix, Disney+ and Co. keep a low profile with their own productions. Nevertheless, there are some exciting new additions in November 2022, including Fantastic Beasts: Secrets of Dumbledore (November 4 / WOW), Uncharted (November 18 / WOW), Joker (November 20 / Amazon Prime) and Split (November 23 / AmazonPrime). In terms of in-house productions, where Netflix is ​​once again at the forefront, we look forward to the following titles! Netflix: Enola Holmes on her new adventures. Source: Netflix In her first adventure as Sherlock Holmes’ little sister, “Stranger Things” star Millie Bobby Brown proved that she can also be an unruly action heroine. In her new adventure, Enola accepts her first assignment as a detective. She is supposed to find a missing girl. But she quickly realizes that she may not be able to solve this case on her own – and even needs the help of her big brother Sherlock.

This mystery series, which deals with the transmigration of souls, comes from Germany. The focus is on Allie, Hanna and Linn, three women who actually have nothing to do with each other. But when Hanna’s son Jacob claims that he was a passenger plane pilot in a previous life, he does not only influence the fate of his mother. Because the pilot could be none other than the husband of the pregnant pathologist Allie.

With Dark, the producer duo of Jantje Friese and Baran bo Odar has created one of the best and most mysterious series of recent years. That’s why the expectations for 1899 are great. Once again things are getting weird and confused. In 1899, an emigrant ship is en route to New York but is thrown off course. The passengers quickly realize that this was probably no coincidence and at the latest when more mysterious events happen on the ship, the mood threatens to change forever. A nightmare in the middle of the sea begins. 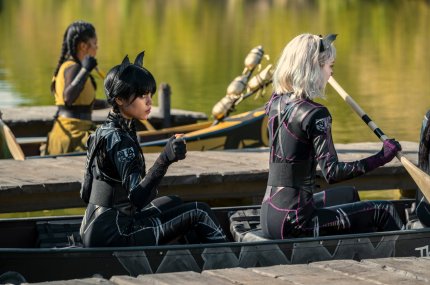 Netflix: Wednesday Addams is settling into her new school. Source: Netflix Once again, Tim Burton dares to breathe new life into a classic. After failing with Alice in Wonderland and Dumbo, he returns to the uncanny and macabre that made him so famous early in his career. In “Wednesday” he tells the adventures of Wednesday Addam, who has to go to boarding school. There she not only draws attention to herself with her sarcasm and her stoic nature. She also has a secret to solve.

Halloween is just around the corner and we present you seven films and series that teach fear. There is something for every taste.

The release date of 1899 and other cool insights into the next promising Netflix series from the Dark makers can be found in the new trailer!

For decades, fans have had to wait for an official sequel to the 80s fantasy flick Willow, and now the series is available on Disney+. It features many characters from the original film, including Warwick Davis as Willow. The action takes place many years after Willow’s first adventure. He is called again to find a kidnapped prince. If you want to know more about the series and the history of Willow, you will find it here. And another tip for all Christmas fans: From November 15, the cult comedy Happy Christmas can be seen on Amazon Prime.

Atomic Heart will be released in February

Well-deserved award 2022 in the World of Tanks (WoT): what will be presented for long service