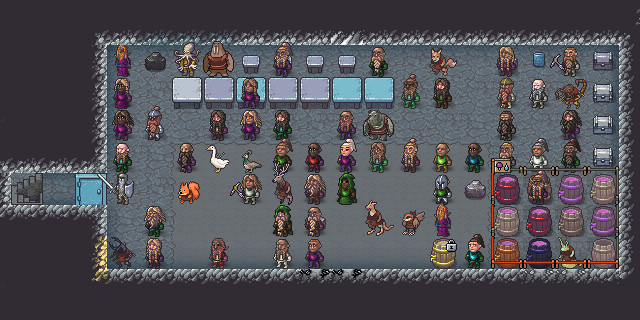 November 3rd, 2022 at 12:41 p.m. by Oliver Jäger – The pixel art dwarf adventure Dwarf Fortress has been available on Steam for months, but a specific release date has so far been missing. The Tarn brothers and Zach Adams, developers of Dwarf Fortress, have now set the release date for December 6th and have given a small glimpse of the future of the game.

News about Dwarf Fortress should be of great importance to players, as the pixel-look economic simulation and building strategy is one of the 20 most popular unreleased games on Steam. For a long time it was kept a secret as to when the dwarf adventure would appear on the distribution platform. So far it has always been said that “time is relative”.

The developers, who consist of the siblings Tarn and Zach Adams and call themselves Bay 12 Games, have now broken with the secrecy. Because it’s now official that Dwarf Fortress will be released in Germany on St. Nicholas Day, December 6th. However, the game is not free, so the price should be 30 US dollars.

How is Dwarf Fortress doing and what’s next?

With the release date, the developers also submitted an update to the roadmap detailing the future of Dwarf Fortress. According to the Adams brothers, a few more building and creature graphics are currently being implemented and some bugs ironed out. There will also be a Legends mode at launch. It is not yet certain whether an Arena and Classic mode as well as a Steam Workshop integration will make it to the start on time. In case of doubt, these things should be submitted later via patches.

Related: Tutorial for Dwarf Fortress: Players should have fun even if they lose

Within the months following the release, they want to bring additional graphics into play and make Dwarf Fortress compatible outside of Windows systems – Mac and Linux are mentioned. The biggest project for Dwarf Fortress, which will follow after a long time, is the adventure mode. Other items on the list of things the developers would like to add are Steam achievements, completing villain systems, and armies and sieges.

After that, a longer development phase will follow, in which the next major improvements to the map system will be made in order to prepare Dwarf Fortress for procedurally generated myth and magic systems. Some of these changes alone should take months to complete. Until then, however, there will certainly be a lot of time in the country. In a little over a month, players can look forward to the preliminary, completed version of Dwarf Fortress.

Guests from the past are arriving at Dead by Daylight