Vladislav VANAT: “The goalkeeper of Fenerbahce was smarter than me” 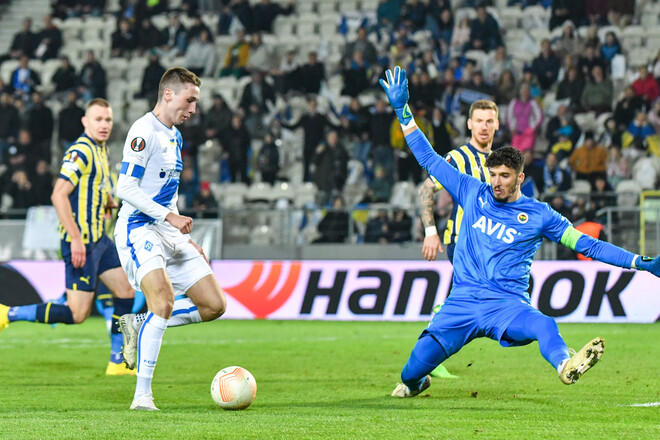 Forward “Dynamo” Vladislav Vanat shared his impressions of the match of the 6th round of the Europa League against Fenerbahce (0:2).

– A very unpleasant result, but we started the match well, we put a lot of pressure, we kept up the pace. Was there a setting for a quick goal?

– Yes, there was an intention to put pressure on and use the free zones behind the backs of the opponents. In the second half, we played better than in the first, but still didn’t achieve a result.

– In what component did you lose to your opponent, what was lacking today?

We conceded two goals in the first half. In the first episode, our players made a mistake, in the second moment, the player with whom I was supposed to play during the set-piece scored. Therefore, I want to apologize to the partners for this.

– This is your debut season at this level. What key lesson can you learn from this experience?

– It is clear that you need to work as much as possible and you need to use every moment, even if it is one, because there may not be more in the match.

– Now Dynamo is focusing on the Ukrainian Championship, but will continue to play twice a week. Is the team ready for such a rhythm?

– Of course, we have recently had a lot of moves, so two matches in Ukraine, especially since most of them will be held in Kyiv, will not be a problem for us.

– In the moment when you went one on one with the goalkeeper, what was not enough to score?

– We analyzed the game of the opponent’s goalkeeper, and he always comes out of the goal very quickly. In principle, he did the same in this episode, but he did not fall, so he blocked the corner for me – and there were not so many chances to score. He was smarter than me.

– There are no main players, at every training session you need to go out and prove yourself.

AMD announces FSR 3.0 technology and HYPR-RX feature - both will increase FPS, but will not appear until 2023

LUCHESKU: "We didn't have a permanent place for training and a stadium"​