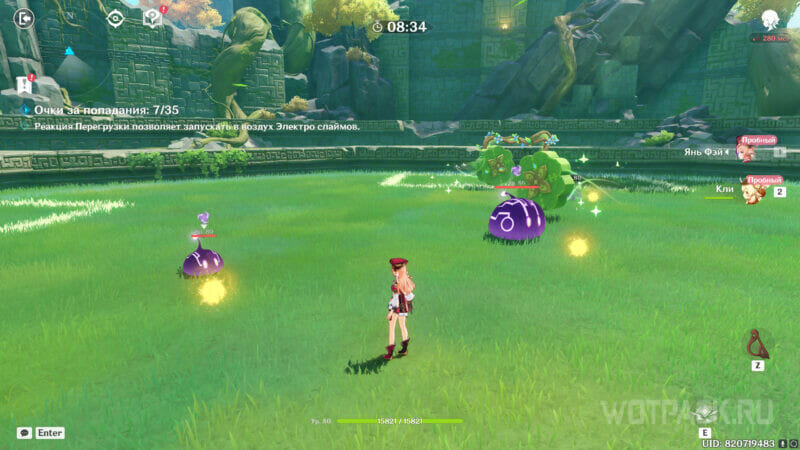 Challenge 1 – Day 1 of the Adventurer’s Challenge event, which includes mini-games Speed ​​Hat Trick, Demoman and Shield Breaker in Genshin Impact. As part of this stage, the Traveler will be able to play “football”, blow up a stone wall and fight with the magicians of the Abyss to get rewards.

This guide will show you how to complete Challenge 1 in the Challenge for Adventurers event in Genshin Impact and complete all challenges. The initial stage takes place on the first day and opens at 12:00 04.11.2022. It will be available until 5:59 21.11.2022 (Moscow time on the Europe server). To start Call 1, open the “Developments» in the upper right corner on the left, then select the event Challenge for adventurers. Click Event Description and navigate to the required step. It is available to all players who have reached Adventure Rank 20. The Speedy Hat Trick is the first challenge of Challenge 1 and unlocks the event’s milestone chain. Trial characters in the current challenge are Yan Fei and Kli. During the first part of the stage, squad members will not be able to use elemental explosions.

With the help of their attacks, you need to activate the reaction Overloadto throw slimes into the Twisted Gate at her expense. Each “goal” will give the Traveler points: in 10 minutes you will need to earn 35 points. 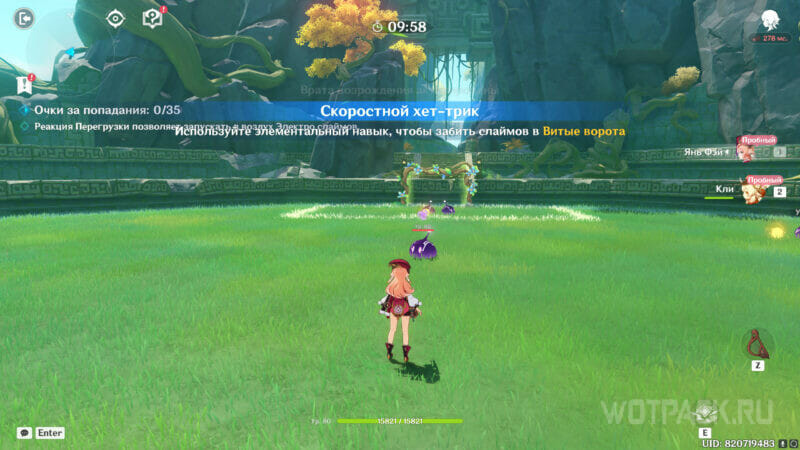 After the start of the test, the characters will find themselves on a football field, on each side of which there are twisted gate, and next to them Electro Slimes. In addition, the arena is scattered particlesrestoring stamina. Don’t forget to pick them up to move around the arena faster. Gradually, the football field changes, creating additional difficulties for the Traveler in passing the test. Spawn big slimeswhich are harder to throw, and also appear near the gate mechanismspreventing you from scoring a goal. The arena will change only twice: first, obstacles will appear only on one side, and then on two. Small slimes are added 1 pointand large 5. Throwing opponents into the gate, you should adhere to the following tactics: if there is a large slime near the gate, then first “hammer” it, then switch to small ones. When the test has just begun, try to earn as many points as possible until obstacles appear on the map.

When the slimes have accumulated in one place, you should not use the elemental skill Kli, because of this they can scatter in different directions.

Also, don’t forget that Overload can be triggered by both elemental skills and charged attacks Kli or Yan Fei. It is worth alternating characters in order to use the cooldown time of skills as efficiently as possible. 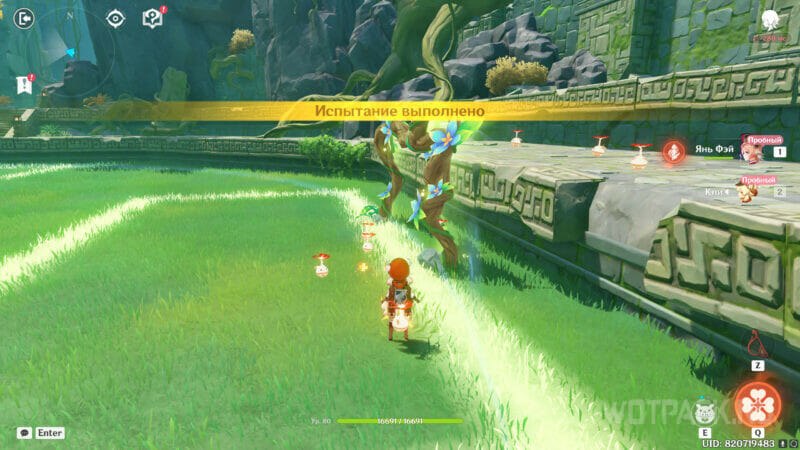 When the slimes in the arena run out, a notification will appear and they will respawn again. There is more than enough time to complete, so you can take your time and not worry. After completing the test, the next one will immediately begin.

The next test of the first stage is Demoman. The trial character for this mini-game is Razor. Use it to destroy exploding rocks and earn points. During the test, the elemental energy of the party members is continuously restored. When the test begins, the Traveler will be in front of a stone wall. It is necessary to break the “bricks” in it, in order to earn points, you will need score 220 points in 10 minutes. In total, there are several types of stones in the wall, in addition to ordinary white ones, bringing 1 point:

When passing the test and destroying stones, it is worth giving preference to yellow ones first in order to get buffs. After that, break the dark red ones, with their help you can lower the bright red ones, and, having already destroyed them, destroy the entire wall. Don’t forget to use your elemental skill and your ultimate: thanks to them, you will be able to break the wall as quickly as possible and break the record for completing the stage. 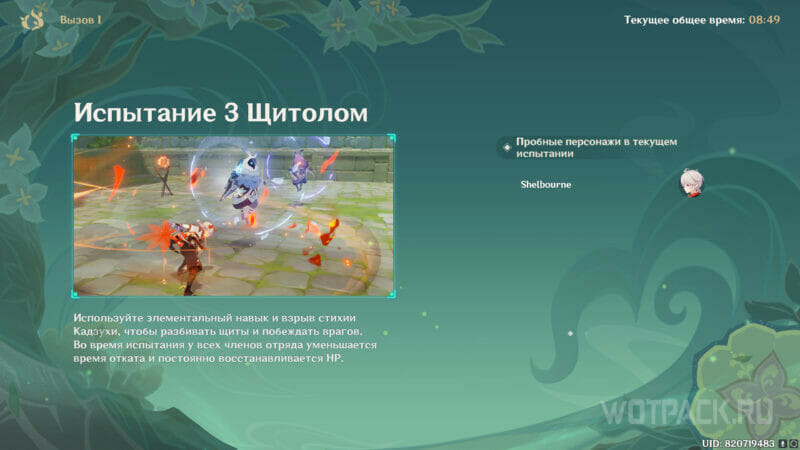 In the third trial, the Traveler is given Kazuha as a trial character. Use his elemental skill and elemental blast to break shields and defeat enemies. During the test, all members of the squad have a reduction in the cooldown of skills and constantly restore health. After starting the last mini-game, you will find yourself in a small arena, where magicians of the Abyss of various elements will appear. Approach them and use your skills to quickly remove the shields and thus defeat them.

It will take 10 minutes destroy 16 enemies. Sometimes there are objects next to the magicians that make it easier to break the protection: a stone that causes rain when destroyed, or a torch. 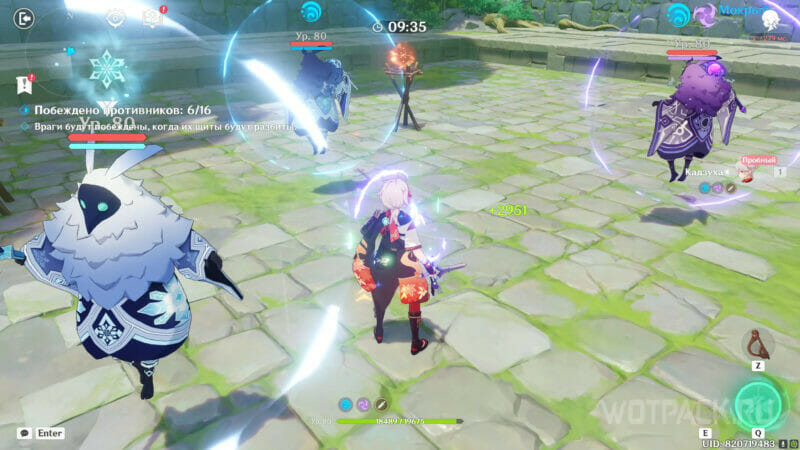 If you want to pass the test in the shortest possible time, then use your ult just before the end, when 3 opponents appear in the center at once. Skill cooldowns have been significantly reduced, allowing you to remove mage shields almost non-stop. After you defeat the last enemy, the test will end, and with it the first stage. 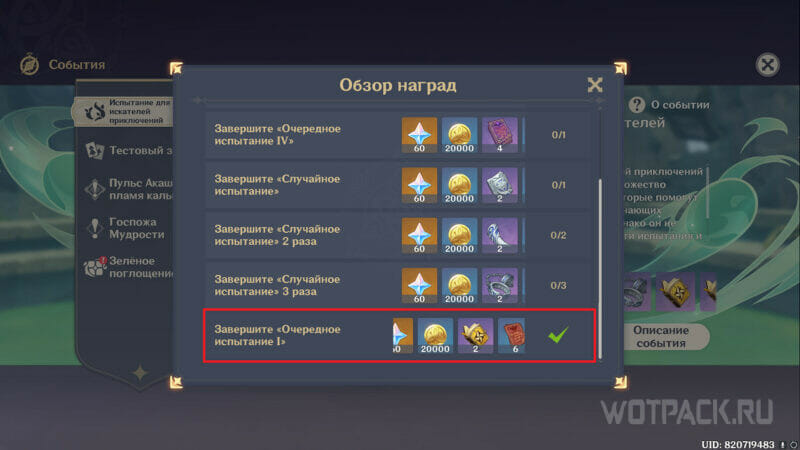 For completing Next Challenge 1, the Traveler will receive the following rewards:

We hope our guide helped you complete the Adventurer’s Trial: Challenge 1 and complete the Speed ​​Hat Trick, Demoman, and Shield Breaker in Genshin Impact. If you still have questions about how to destroy the wall, remove the shields from the magicians of the abyss or score slimes in the gate, then write to commentsand we will definitely help. Read our other Genshin Impact guides in the corresponding section of our website.

Better than Mbappe. Mudrik is the fastest player in the Champions League group stage

Xiaomi: new GaN charger and 5-in-1 docking station that you can take everywhere