An interesting survey conducted by JustWatch demonstrates how theeSports is already very well placed, in terms of public, in the direct competition with other major sporting events broadcast in streaming, demonstrating how the world finals of League of Legends have surpassed, in terms of spectators, those NBA and MLB.

The graph with the comparison between some of the major sporting events broadcast in streaming and the World Finals of League of Legends, published by JustWatch, helps to understand where eSports are currently positioned in terms of audience and what the future of this area may be. still relatively new entertainment.

The graph shows how the UEFA Champions League final is by far the most watched event in the world, with 390 million spectators registered for the 2022 edition, followed by Super Bowl LVI with 208 million. 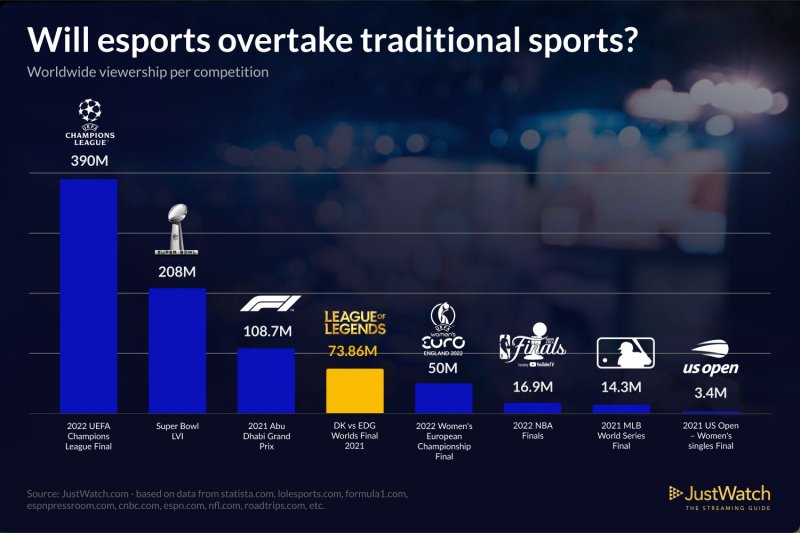 eSports versus other major sporting events: a comparison chart

It falls sharply with the third position, represented by the Abu Dhabi Grand Prix of 2021 with 108.7 million spectators, but it is remarkable to see how the World Finals di League of Legendswith 73.86 million viewers.

It is a truly impressive result, especially when compared with the events that follow in the standings: we find in fact the final of Euro 2022 of women’s football and then the finals of the NBA, those of the MLB and those of the US Open of 2021. eSports therefore surpass, according to data collected by JustWatch, probably the most significant events in basketball and baseball, as well as a couple of events of enormous importance also for football and tennis.

It is very likely that, in the future, the success of major eSports events is destined to grow once knowledge is more widely disseminated to new audiences. Precisely on this topic and in particular on League of Legends, we invite you to read the special on eSports and the strength of live events, written about the 2022 Series of the Riot game.