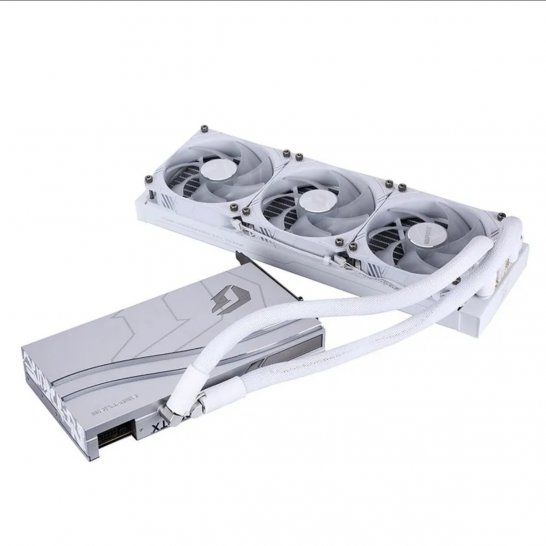 November 4th, 2022 at 4:41 p.m. by Benjamin Gründken – With the Geforce RTX 4090 Neptune from the iGame series, Colorful recently presented a graphics card that is said to be able to be overclocked particularly high. Now the Colorful Geforce RTX 4080 iGame Neptune is presented with a manufacturer TDP of 380 watts.

Like its big AD102 brother, the Colorful RTX 4080 iGame Neptune should also offer a dual BIOS switch. This allows users to increase the boost clock from 2,505 MHz to 2,640 MHz. The TDP specification of 380 watts is not a factory setting, but the maximum value that can be set via software. In order to keep the Colorful RTX 4080 iGame Neptune at this temperature, it has a compact water cooler with three 120 millimeter fans.

In the face of such sightings, it remains exciting to see how the different manufacturers integrate RDNA 3 into their graphics card concepts. The board power of the Radeon RX 7900 XTX presented yesterday, for example, is specified as 355 watts – that of the Radeon RX 7900 XT is officially 300 watts. At the latest with a compact water cooling there is certainly still room for maneuver. Last year AMD even played this card itself with the Radeon RX 6900 XT Liquid Cooling.

Nvidia originally wanted to release the Geforce RTX 4080 as both a 16 and 12 GiByte version, but since they also wanted to install different chips and, according to Nvidia, buyers would have found this confusing, the smaller version was withdrawn without further ado. The Geforce RTX 4080 with 16 GiByte is scheduled to appear on November 16 and costs from 1,469 euros according to the manufacturer.

This is the super-powerful 2400W Hummer electric mountain bike with 2-wheel drive!

At this price, this Honor 70 + Magic Watch 2 pack is the excellent deal of the day

Why Nahida's skill animations are computer-like in Genshin Impact

LEGO promo: one of the most famous paintings in the world finally has its replica!

Gamble for free on Steam: These games are currently available for free