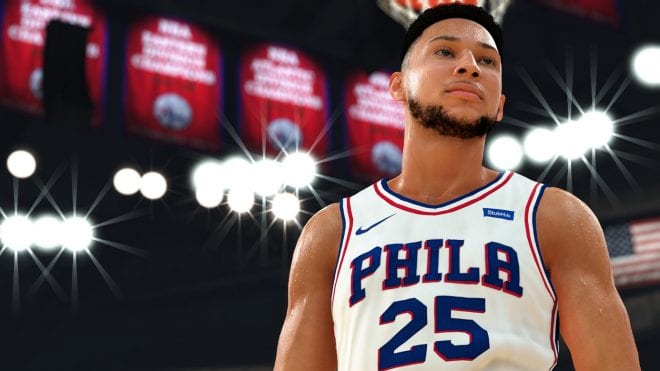 Opening our list is 2K’s popular series of serious basketball sims that dates back to 2000. Every year a new part is released, which is better than the previous one in terms of graphics, animation, game modes and other gameplay components.

The only serious drawback of NBA 2K is the traditionally high price for sports games from 2K.

NBA Live Series (up to and including NBA Live 2005) 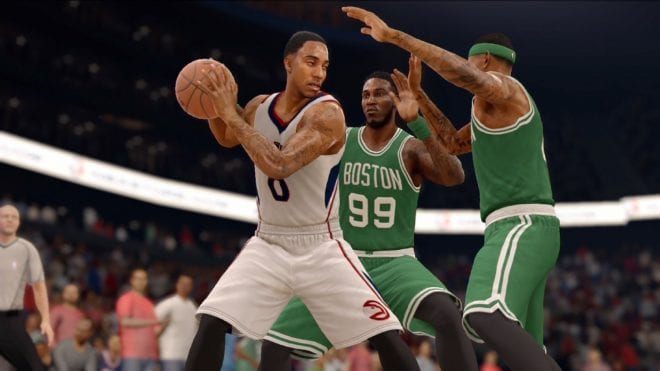 NBA Live is a series of popular basketball simulations from EA Sports, which ceased to be released on PC after 2005 due to the publisher’s policy. However, for fans of serious and realistic basketball games, it still remains one of the best on a par with the NBA 2K series.

Where could I buy: it was not possible to find games in the series in official digital services. 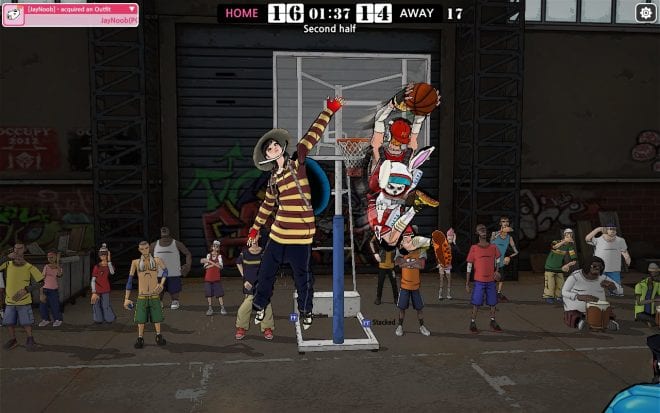 Multiplayer sports simulator dedicated to street basketball. In essence, Freestyle 2: Street Basketball is a game unique in its genre with exciting 3v3 matches, a special street atmosphere, stylized comic book graphics and the ability to create your own basketball player. An advanced editor will give the character a unique look and style of play.

Also, the style of play is influenced by the chosen position, which determines the methods of attack and defense, types of throws and passes. And each team member is a live player! What brings Freestyle 2: Street Basketball closer to the MMO genre. There are also daily tasks and the ability to upgrade your virtual basketball player. The game is free, you can download the client in the Steam service. 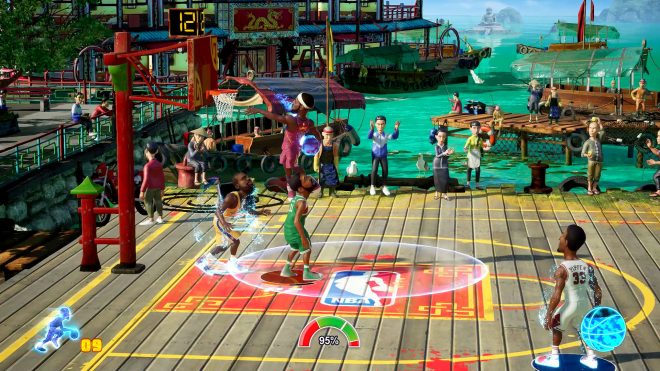 A sequel to NBA Playgrounds that’s more fast-paced and more arcade-y than the original. Players are still invited to play street basketball, but the level of matches is significantly increased: now gamers can participate in full seasons! Users can recruit NBA stars to their team, including Michael Jordan, Jason Tatum, Kobe Bryant and others.

Unlike the usual NBA 2K, the whole game is accompanied by spectacular special effects, and the athletes seem to have superpowers. They can jump high up and literally “fly” to the ring.

NBA 2K Playgrounds 2 lets you play with friends over LAN and challenge other users from all over the world. 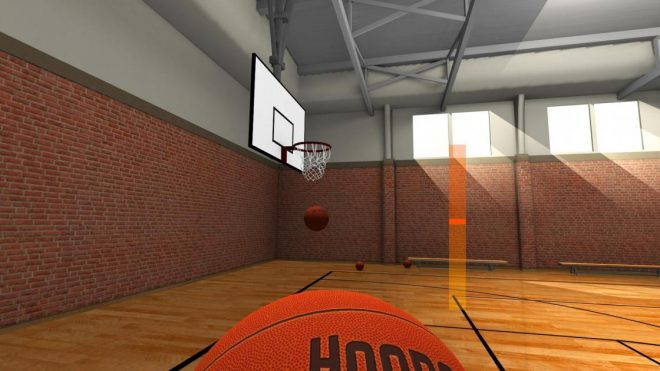 Basketball simulator for virtual reality glasses. Here you can hardly get bored, because the game constantly throws up various tests. Standing still, you must shoot balls into the basket and score points to get to the top of the leaderboard.

And everything would be trite if at random moments in the game the rules would not change dramatically. In addition to balls, you will also have other items in your hands (burning paper airplanes, vegetables, and so on), which also need to be thrown into the basket. Thus, something incredible will happen on the field! 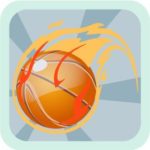 Basketball – Throw the ball into the basket. Set a record. 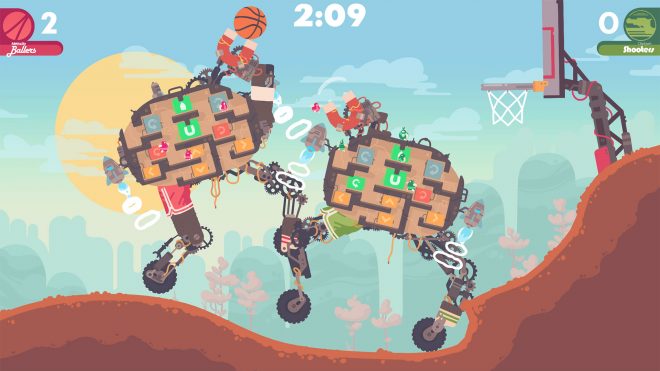 Co-op basketball platformer with robots. Yes, that’s right, we were not mistaken! This is a rather creative and original game in which gamers in a team will have to control giant robot athletes. Once inside, players will activate the movement and action buttons (pull/throw the ball) to make the mechanized Frankenstein move.

The goal remains the same – you need to throw the ball into the basket. But what is happening on the screen is so exciting that you can accidentally score yourself. Regular Human Basketball is only suitable for those who want to have fun with friends. Alone, this fun will seem like a chore to you. 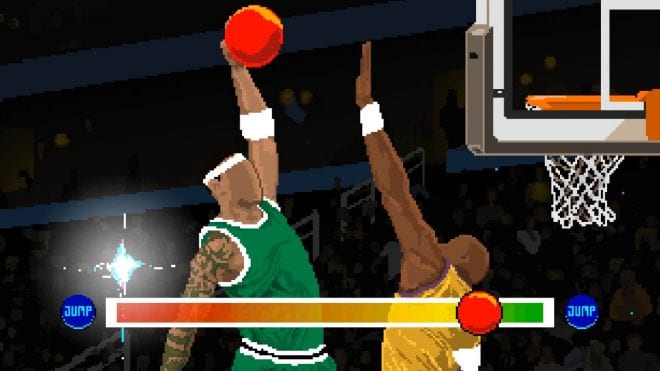 An arcade basketball game that takes players back to the golden era of sports gaming with pixel art and simple two-button gameplay.

At the same time, the developers from Namo Gamo tried to make the gameplay in Basketball Classics as diverse and rich as possible, bringing it a little closer to the best modern representatives of the genre. Players will have several options for throws, strict adherence to all the rules and technical nuances, almost two hundred teams with unique players, the presence of a story mode and local multiplayer. 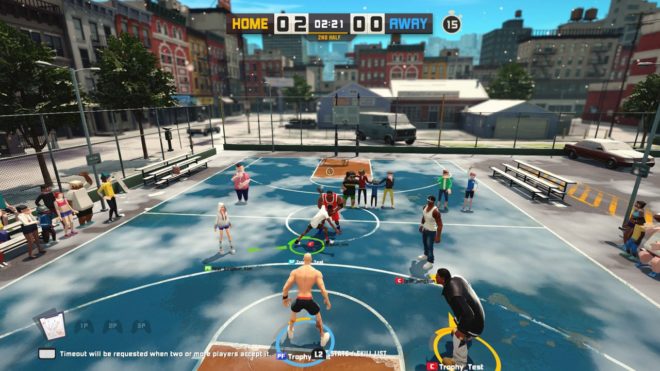 3on3 FreeStyle: Rebound, like some of the previous candidates in the selection, offers to conquer the streets by showing your skills in basketball. The game is based on real street basketball courts – get ready to compete either alone or in 1v1 or 3v3 multiplayer modes.

The advantages of 3on3 FreeStyle: Rebound include nice cartoon graphics, simple controls, a good selection of athletes and accessibility – you can download the game for free from the Steam site. 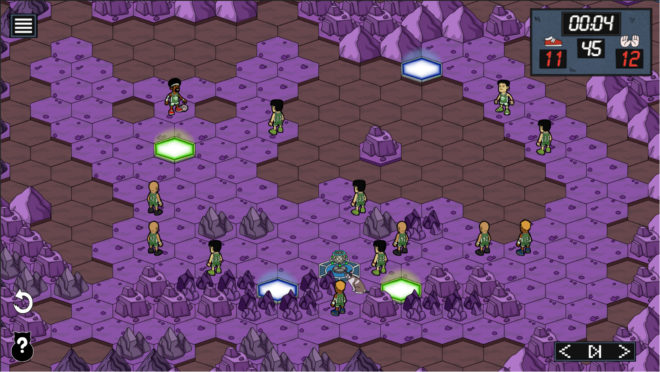 It’s clear from the name that BasCatball Mars is not just a simple basketball game. Yes, her actions really take place on the Red Planet, and instead of a ball, the players have a fluffy cat. But no sadism and cruelty – the handsome man is carefully passed from hand to hand and delivered to a kind of basket.

In terms of gameplay, this is an original puzzle game. You will control the athletes on a field divided into hexagons – thus, the gameplay is step-by-step and makes the gamer think about each move. Despite the fact that there is little left of classic basketball here, both professionals and fans of this sport will like the game, at least for its originality. 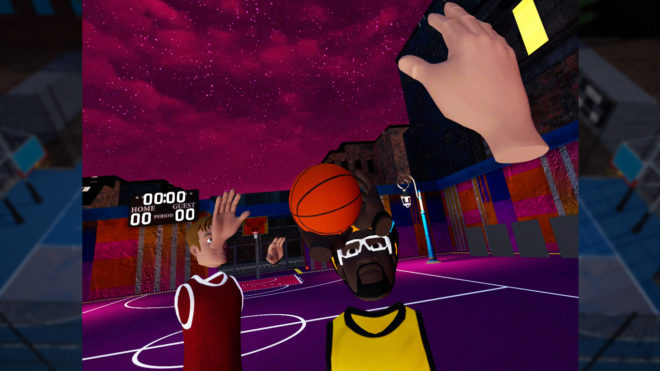 Another basketball simulator for virtual reality glasses, but this one has to compete with other players in multiplayer. Moreover, you can test your skills in full-fledged leagues, but the game is not popular, so finding rivals can be difficult.

The developers offer realistic controls, thanks to which you will feel all the maneuvers and movements, as well as be able to practice throwing the ball. Several court options (indoor and outdoor) are available for the match, and the player’s avatar can be customized with many options. 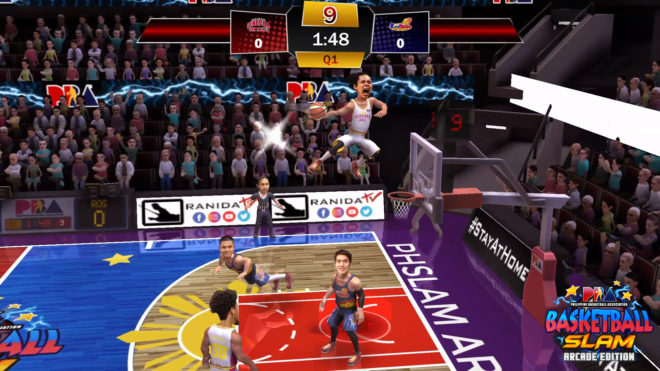 PBA Basketball Slam combines the rules of basketball with fun and incredible stunts, so athletes can hit slam dunks from the opposite end of the field and perform other epic moves. This picture is decorated with witty comments that only native speakers of foreign languages ​​can understand.

It’s a fun, fast-paced and simple 2v2 game played by basketball stars from the Philippine Basketball Association (PBA). They offer to play against bots or other players behind one screen. 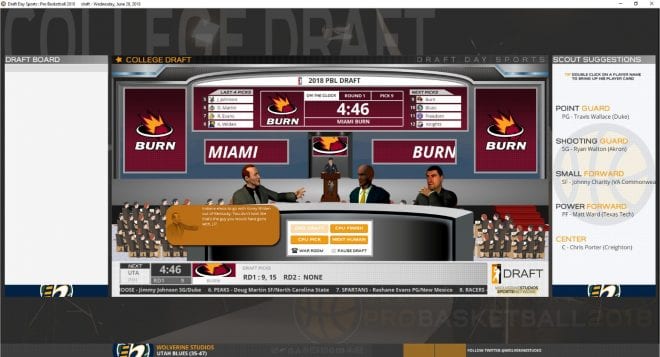 Draft Day Sports: Pro Basketball 2018 is a basketball manager from independent developers Wolverine Studios, who have tried to implement all the primary attributes of the genre in it, shaping, due to their modest capabilities, also the characteristic atmosphere of the “behind the scenes” of big sports. The player takes on the role of the manager of a professional basketball team and performs a range of challenging but exciting responsibilities related to its promotion to the major leagues and the most prestigious championships. 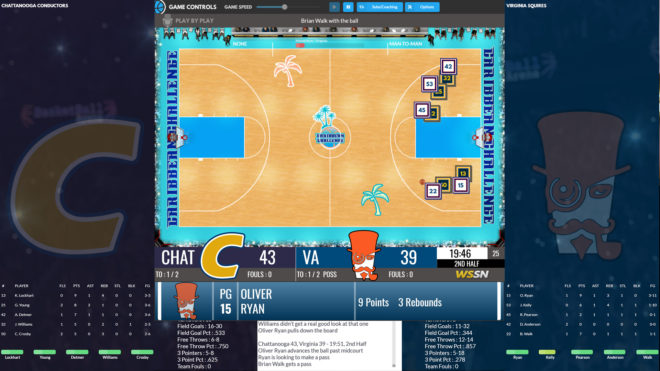 Above, we have already considered the basketball manager from the Draft Day Sports series, however, he was about professional athletes. In College Basketball 2020, you are invited to take on the role of the coach of one of the college teams and lead it to world fame. The work is similar – you need to hire athletes, solve problems in a team, negotiate matches, and so on, but everything is seasoned with a learning atmosphere.

The game itself boasts a simple and at the same time detailed user interface, which is not overloaded with reports, news and other information and allows you to competently deal with everything. 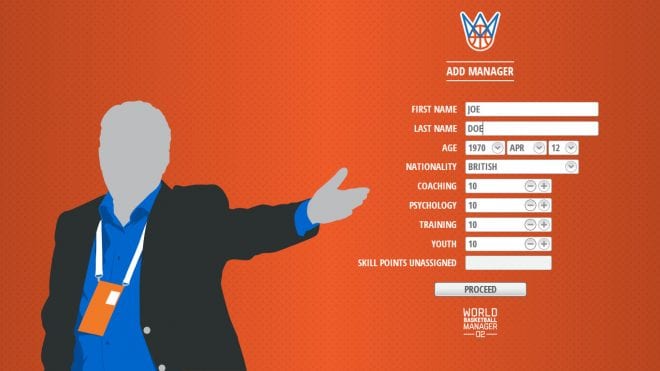 Our list of basketball games continues with the World Basketball Manager series, which appeared in 2010 through the efforts of the Icehole Games studio. The first game of the series came out rather mediocre (and many even considered it a complete failure) due to an impressive number of problems: an inconvenient interface, lack of optimization, ill-conceived and boring management, lack of licensed teams and athletes, and much more.

But the second part, although not a masterpiece among basketball-themed computer games, nevertheless corrected most of the omissions of the first part, and offers a completely sane career as an aspiring basketball team manager. 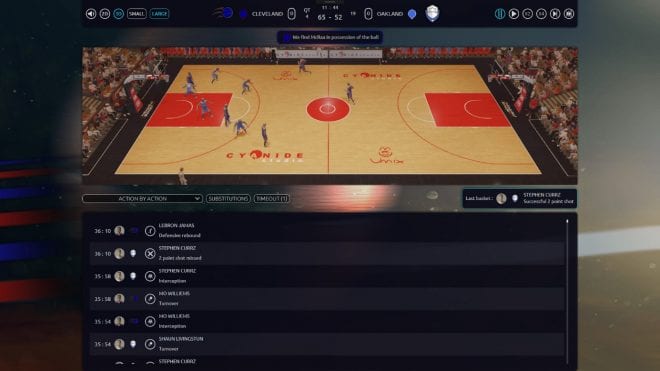 The Pro Basketball Manager series (formerly called Basketball Pro Management) has not received unambiguously positive reviews among basketball games, but it cannot be called frankly a failure either.

Standard for the genre of sports managers, slightly long and boring (according to fans of action) mechanics, teams and their lineups that are relevant for each season, an abundance of features and amendments added with each new version – all this, of course, should appeal to the most devoted basketball fans, dreaming of trying himself as a team manager. 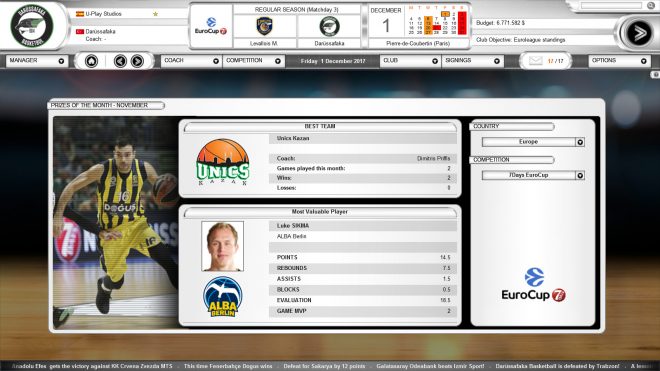 Basketball manager simulator in which the player in the role of manager will have to make his team number 1 in this sport. Unfortunately, playing on the field is not allowed here – instead, the gameplay is based on the study of various tables, tactics, budget allocation and other things. The gamer will decide which team to appoint a match with, take care of the training of his fighters, sign contracts.

And no, it just sounds boring. The work of a sports manager is not easy, but when you get involved in the process, it is impossible to break away! 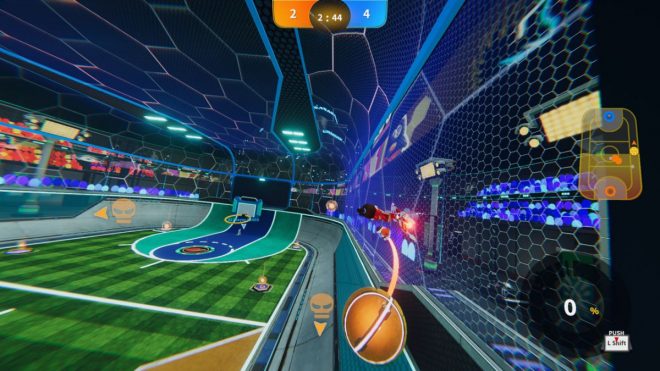 An original representative of the genre that offers you not only to play basketball, but also to have fun with your friends. The playing field is presented in the form of an unusual area with rounded corners, and two teams (3 people each) compete on it. Riding on a hoverboard, participants must hit a ball into a giant ring. You won’t be able to take it in your hands, but you can use a special “whip”.

There is the possibility of customizing athletes

As you understand, this is quite an interesting game with original gameplay and dynamic matches. There is no single player mode – so call your friends and play together! What’s more, Swing Dunk is free.

Bayonetta 3 was originally planned as a semi-open world, according to a report