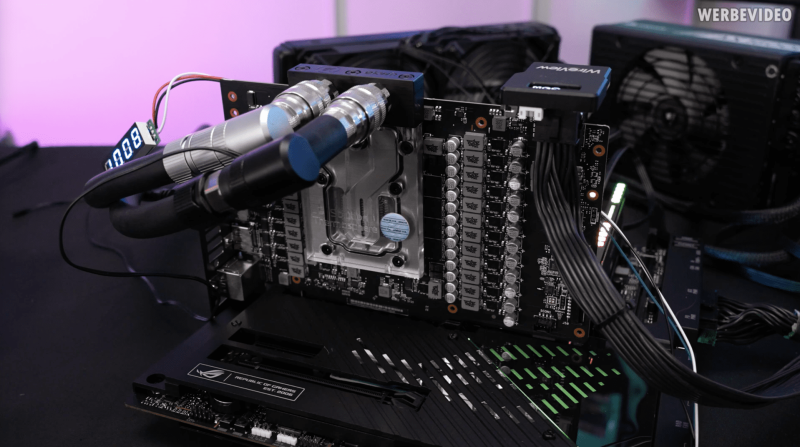 450W, 600W, efficiency and “gluttony” – all these topics caused heated discussion after the release of the GeForce RTX 4090. When testing the GeForce RTX 4090 Founders Edition, TDP scaling was checked, and a level above 450W for a video card simply does not make sense. In the range of 400-450 W, the frequency rests on the voltage limit.

In one of the first overclocking videos of the GeForce RTX 4090, Roman Hartung der8auer showed that a higher Power Limit only makes sense when the voltage is increased. To do this, he used I2C bus access through a special tool, directly accessing the voltage controller. A slight increase in voltage resulted in a power consumption increase of 100W or more. So NVIDIA has set a quite reasonable limit here. Although it is already located very high, and with proper cooling, a level above 450 watts also makes sense.

Roman received an Extreme OC BIOS for the ASUS ROG Strix GeForce RTX 4090 24GB OC Edition graphics card. The new version allows you to set the Power Limit to 1.000 W, while disabling all temperature protection mechanisms. With a BIOS like this, inexperienced users can easily burn the GPU, which is quite difficult with a regular BIOS. 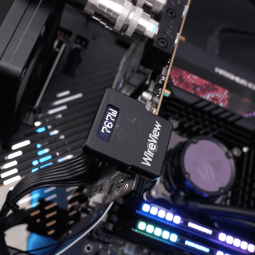 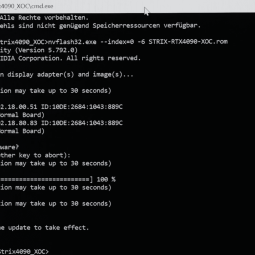 With a standard BIOS, the ASUS ROG Strix GeForce RTX 4090 24GB OC Edition graphics card allows you to increase the Power Limit by 20% to 600W. After flashing the Extreme OC BIOS, the Power Limit level cannot be changed, but it is already at a maximum of 1.000 W. If the GPU is equipped with a powerful enough cooler, it will not burn out.

Roman equipped the video card with a rather ancient GPU water block, since there is no option with full coverage yet. Step by step, he raised the tension. Since the cooler only removes heat from the GPU and memory chips, we had to keep an eye on the VRM temperatures.

As a result, the cooling system became the limiting factor. The power consumption of the video card reached 760 W, the GPU temperature rose to the bar of 70 ° C, after which a further increase in voltage for overclocking the GPU lost its meaning. It simply requires a more efficient cooling system. Initially, Roman planned to cool the video card with liquid nitrogen, but a problem was identified with a sample video card – the PCI Express interface uses only eight lines instead of 16. This affects performance, especially with extreme overclocking, where every percentage is important.

Now Roman is solving the problem with the video card, after which he will continue overclocking.

The premiere of "Scream 6" was postponed, but to an earlier date

Igor JOVICEVIC: "Those who get Shakhtar in the Europa League will not be happy"

The new Sea of ​​Thieves adventure “Return of the Damned” begins

NBA. New York won on the road against Oklahoma City, Mikhailyuk did not play