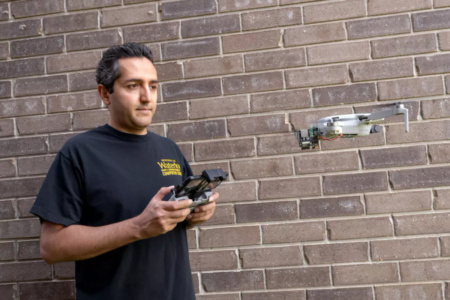 A University of Waterloo research team has discovered a Wi-Fi security flaw that allows hackers to find and track devices through walls with an accuracy of up to 1 meter. The attack exploits a wireless feature called “polite Wi-Fi” as a backdoor.

The researchers explain that smart devices automatically respond to contact attempts even on a password-protected network. Therefore, they developed an unmanned flying module, which they called “Wi-Peep”. It sends out multiple signals during flight and then measures the response time. This method allows you to triangulate the position of network devices to within a meter of their position, and can also be used to track moving devices such as cell phones.

Even more worrying is that attackers can remain virtually invisible to their target as they can control the drone from a hidden location. A nearby building or a van parked on the street are good covert surveillance opportunities. Even if the victim notices the drone (which is unlikely), it will be impossible to determine the operator.

Moreover, creating Wi-Peep was easy and inexpensive. The researchers only needed to equip the finished drone with “readily available equipment” costing about $20.

Unfortunately, there is no protection against this type of attack yet. This Wi-Fi loophole exists to make communication between devices easy and transparent. Without a complete overhaul of the entire system, there is little that users or administrators can do other than disable Wi-Fi. The researchers advise Wi-Fi device manufacturers to include random variations during response time. If the signals are returned randomly, the method cannot accurately calculate the position of the device.

Camera drones equipped with Wi-Fi enabled spy components are becoming more and more popular. Last month, a financial firm discovered that attackers had used two modified drones to infiltrate its network from outside a building. Security analysts say the use of drones to hack networks has become more common in recent years.

Up to €160 free: online banking offers to make the most of Black Friday