Bayonetta 3 is a great game! If only the performance problems weren’t there…

Ambition is a word you hear a lot in the video game world. It implies a lofty goal that aims to exceed expectations. An attempt to reach for the moon, so to speak, and in the case of Bayonetta 3, it’s certainly an apt description. But: Projects with ambitious goals often fail and this also applies to the latest work from developer PlatinumGames.

To get straight to the point: Bayonetta 3 is a fantastic action game that should delight fans of the series. The bombastic locations, the varied design of the levels and the completely out of control story make the game something unique. However, the game also reveals an outdated technology base that is crumbling under the weight of its scale and size. It’s a game that makes you feel like the entire production is looking for more powerful hardware that they never find.

After playing Bayonetta 3, I thought about the beginnings of the series. The original Bayonetta is fast, fluid and brimming with ideas. It was never a technical masterpiece, but it was a beautiful game for its time. Years later we were treated to the majestic Bayonetta 2, first on the Wii U, then on the Nintendo Switch. Bayonetta 2 feels like a logical next step, both in terms of gameplay and graphics. Again, it’s not groundbreaking, but it feels good in the context of its target platform. For me, Bayonetta 3 does not live up to the realistic expectations set by the first two titles in the series.

Bayonetta 3 is a massive game – there’s no doubt about that – and the scale and scope of the game world has been greatly expanded, resulting in a wild experience that encompasses a multiverse, multiple playable characters and a smorgasbord of Bayonettas. The enemies are bigger, the locations more extreme, and the sheer number of things you can do has increased significantly. Combined with the stunning soundtrack there is no doubt that we have something special here.

But then we come to the graphics. As a lover of retro games, I regularly play games that most modern gamers would consider “ugly” or “outdated”. Also, I love it when developers work with the limitations of the Nintendo Switch hardware. To put it simply, Bayonetta 3 can look great at times, but most of the time you feel that the art design doesn’t necessarily match the technical reality.

Textures are often low-resolution and muddy-looking, image quality is subpar, and performance is notably unstable. It fares worse than any other Bayonetta release other than the PS3 version of Bayonetta 1. And that’s a shame. The presentation is probably best described as “inconsistent”. Depending on which chapter you are in, the graphics range from beautiful to downright ugly. 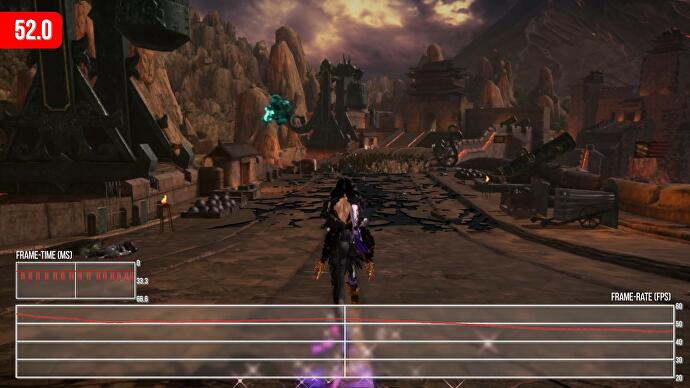 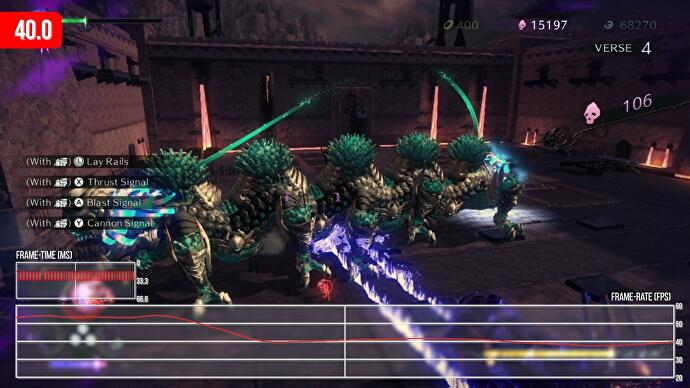 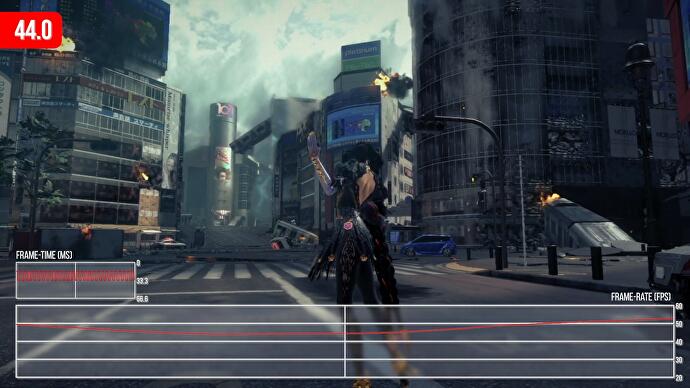 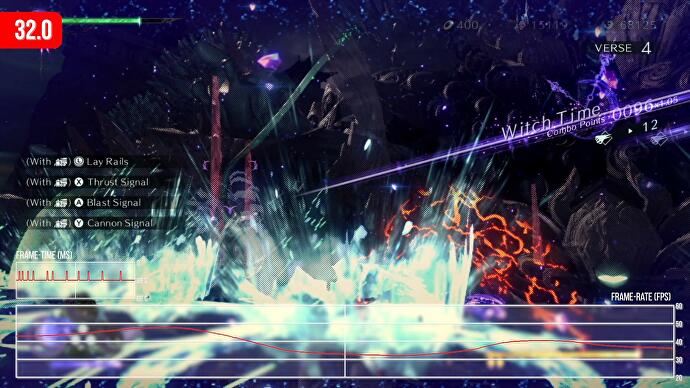 Bayonetta 3’s performance is extremely inconsistent – far more unstable than other titles in the series – and it rarely hits, let alone sustains, the 60fps target.

Watching all three games, I feel like my impression of the third part stems from an increase in the scope of everything, along with important artistic choices. In the first part, Bayonetta fights against opponents of different sizes, most of the game revolves around fighting with enemies similar in size to the titular heroine. Sometimes these battles take place in limited arenas, while other battles flow organically along the main path. At various junctions, you’ll face off against mid-bosses, larger enemies that require extra strategy and finesse to defeat. They are often several times larger than Bayonetta itself and help spice up the level design. Finally, there are the huge, screen-filling bosses. These special encounters require you to reduce the huge health bars of these gigantic enemies to zero.

Bayonetta 2 builds on this concept but features more boss fights at regular intervals. With Bayonetta 3, however, one has the feeling that the small minions appear less frequently and in fewer variations. The average fight instead takes place on a larger scale, while huge bosses make regular appearances as well. This results in two major changes: First, the environments are enlarged. The arenas are much larger than in previous games in the series and therefore have less detail. Second, the camera spends a lot more time zooming out of the action to ensure the player can actually see what they’re fighting there.

The scale of these fights is often great fun. You get the feeling that Platinum wanted to outdo themselves with this game and take things to the next level, but maybe went too far. The camera often zooms far out of the action and, what’s even more annoying, it regularly moves through enemies and the scenery. In the originals, these objects were rendered with alpha transparency effects when the camera traversed a solid surface, but in Bayonetta 3 Platinum relies heavily on dithering, likely to lower the fill rate. If you think back to the Sega Saturn and its notoriously questionable transparencies, you have a good idea of ​​what they look like. It’s basically a chopped up alpha effect and it’s everywhere. You see it constantly during fights and even in the environment, and it never looks particularly good. 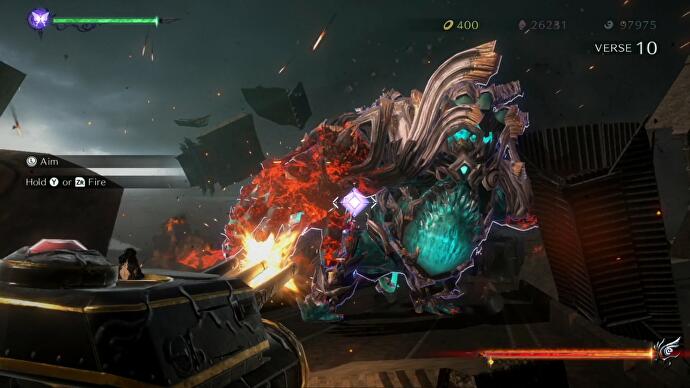 There is a lot to enjoy about Bayonetta 3, it can look beautiful, bombastic, exciting and original.

The overall picture quality is also quite limited, the series is not known for high resolutions. Bayonetta 2 was even limited to 720p on the Switch. Bayonetta 3 improves slightly on this with an increase in pixel count to 810p. However, the portable mode, unlike previous games, falls below 720p, the pixel count suggests a resolution of just under 480p, so it’s not exactly sharp there either. This is forgivable given the framerate target, but the low pixel count, large environments, and poor quality of texture filtering aren’t exactly a great combination.

The environments are the strangest thing for me though. The game is often surprisingly dark. The entire Tokyo section is covered in monochromatic textures and non-existent lighting. I’m not expecting high-end real-time lighting here, but I feel like the original games did a better job with their pre-calculated lighting. That said, there are still some nice environments, but there are many more levels that just disappoint in terms of visual quality. In general, this feeling for a consistent gaming experience is missing.

What I’m saying is that Platinum takes the spectacle to the extreme. Basically, considering the aforementioned staged combat, Bayonetta 3 takes it a step further than full-screen boss battles. Building so many of these bespoke action sequences can’t have been cheap or easy, there’s a lot of custom animation and camerawork that’s very impressive. The same goes for the cutscenes, at least most of them. As usual in the series, the frame rate is lowered to 30 fps in the cutscenes and the visual quality is increased. This also applies to Bayonetta 3. 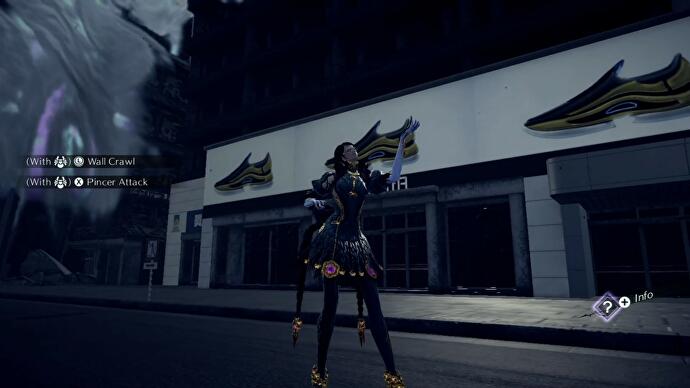 As good as the game looks in some sections, many of the other areas just look boring.

There’s a catch, though: while many of the cutscenes are rendered in real time, as in previous games, certain sequences are now rendered as video clips with obvious compression artifacts that are fairly obvious. The entire introductory sequence, for example – a staple of the series – is no longer a real-time cutscene. At least the transition between video and real time is seamless.

In my opinion, Bayonetta 3 is a solid action game with some impressive locations, marred by unconvincing graphics and slight camera issues. As long as the frame rate is solid it would be easy to overlook the display issues, but unfortunately the reality isn’t quite what I was hoping for. In the cutscenes, the target frame rate of 30 frames per second is actually maintained, as you would expect, so there are no problems. Surprisingly, the actual gameplay in the larger scenes is also updated at 30 frames per second. It’s clear that the scale of these scenes makes 60 frames per second impossible, so they’re just clipped instead. That’s understandable, but normal gameplay rarely hits the 60fps limit and that’s a real problem.

Even empty rooms don’t hit the framerate we’re aiming for, meaning that once you do engage in combat, you’re essentially left with an unstable experience. Most battles in the game struggle to hit 60 fps. It’s hard to find even a single fight that’s reasonably stable. The result is that it feels sloppier than I was hoping for. It runs a lot less smoothly than the previous two games, apart from the horrible PS3 port of the first Bayonetta of course. 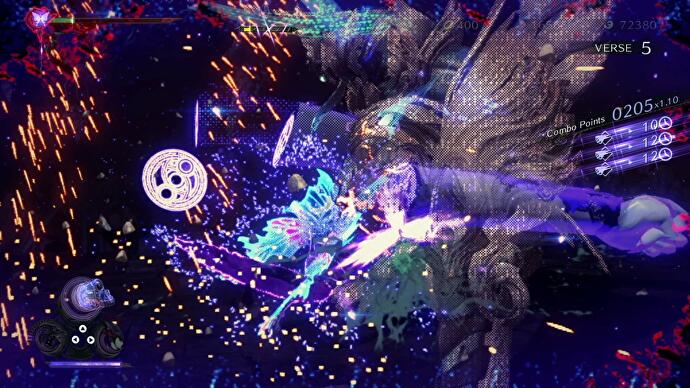 Maybe Platinum just went too far and drastically pushed the limits of the Switch. Using an effect instead of proper transparencies looks ugly, reminiscent of the old Sega Saturn days.

For those reasons, I feel like Platinum might have gone a little too far this time, at least based on the pesky limitations of the Switch hardware. In fact, it’s reminiscent of The Wonderful 101 on the Wii U, which suffered from similar performance issues, only occasionally offering a smooth 60fps experience. So if you were happy with the performance in this game, you won’t mind Bayonetta 3 either. But that’s just not good enough for my taste.

From my point of view, Bayonetta 3 fell short of expectations, but I should make it clear that despite the poor technical performance, this release is still special. I have a feeling the game might have worked best as a launch title for the upcoming Switch successor. Given Platinum’s experience porting games, an upgraded version for the next-gen Switch could be a possibility, but for now, this large-scale action-adventure requires some flexibility from players if they’re to enjoy it. I feel like Platinum’s technology really needs a complete overhaul. Of course, maintaining the in-house technology is challenging and expensive, but what they’ve achieved here is still impressive given that. However, it doesn’t feel like it’s playing to the strengths of the Switch’s hardware.

If you don’t set your expectations too high when it comes to technology, you can have a lot of fun with Bayonetta 3. However, if unstable frame rates and inconsistent visual quality bother you, this might not be the game for you.

The Lord of the Rings: discover the story of Sauron, emblematic villain of JRR Tolkien

Netflix subscription with ads is not supported on Apple TV, among others

RATE OF THE DAY. The main matches of the day and popular predictions for November 28