Can you run a red light on a bike? A question that you have surely already asked yourself, and to which we answer in this file which, in passing, summarizes and explains all the road signs addressed to cyclists and included in the highway code. 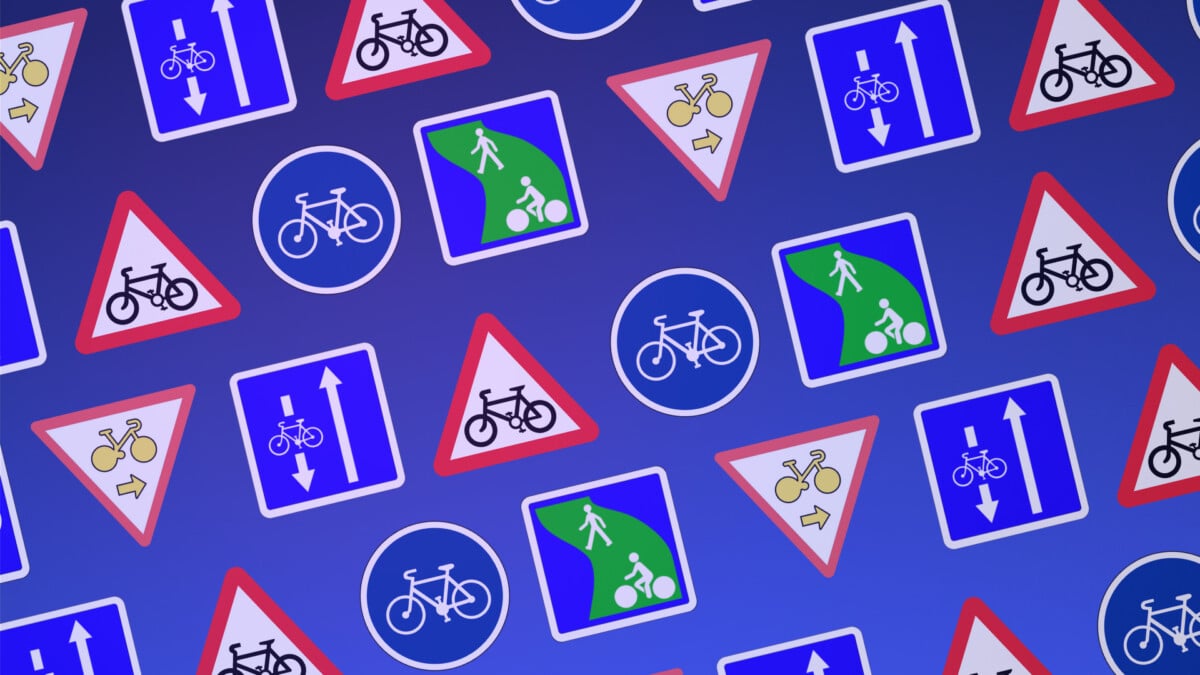 Ensuring a good coexistence between cyclists, motorists and motorcyclists requires respecting the rules and road signs present everywhere on our journeys. Bicycles and e-bikes are not spared. Knowing them well means protecting yourself and others.

This file aims to list and explain all the signs designed for cyclists. Some of them are extremely obvious, others less so. Above all, this little clarification may be useful for users who have not obtained their highway code, and for whom the meaning of the signs may be less intuitive.

Permission to run a red light, on one condition

Normally, it is forbidden for a cyclist to run a red light, under penalty of collecting a fine of 135 euros. Failure to stop at an orange light also results in a fine of 35 euros. However, one sign in particular overrides this rule and gives you the right to continue driving at a red light.

This is the “straight ahead” or “turn right” sign, as the government site calls it. Triangular in shape and surrounded by a red border, it hosts in its center a yellow cycle accompanied by an arrow indicating a direction: either straight ahead or to the right, for example. Other directions may be indicated. This panel is placed at the traffic lights.

If you cross it as a cyclist, it means that you are authorized to continue your journey in the direction indicated, even in the event of a red light. On the other hand, you must systematically give way to pedestrians, as well as to vehicles which have a green light. 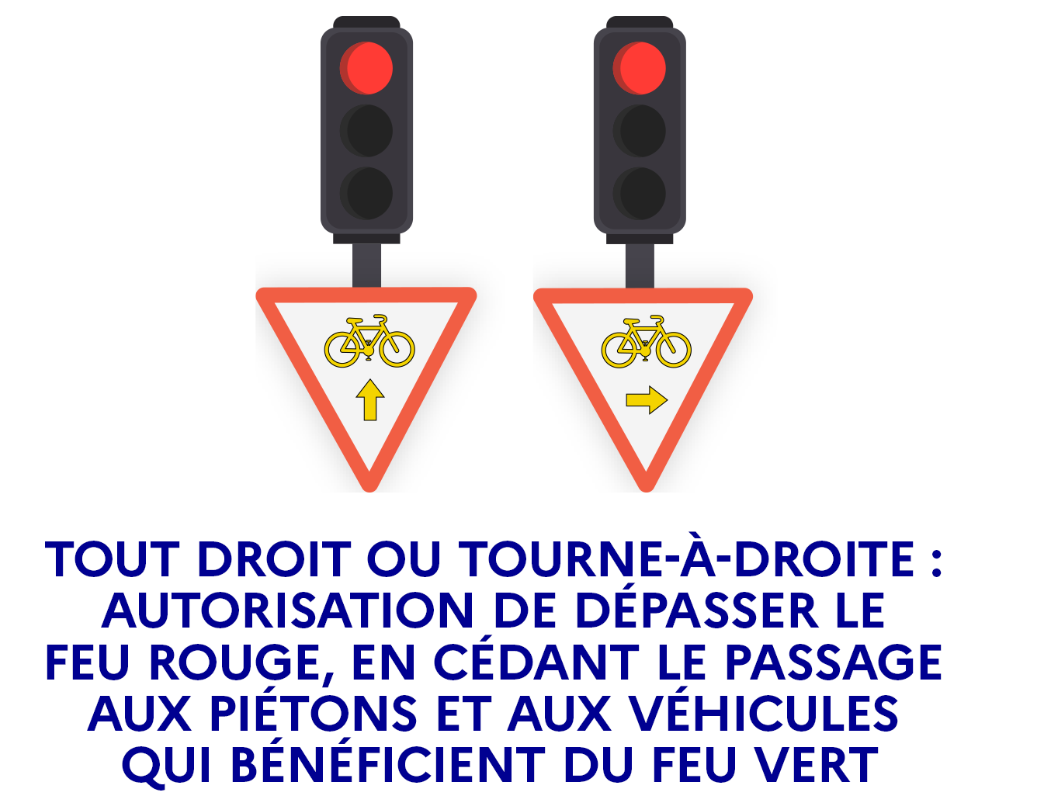 It is round in shape, with a red inner crown and a bicycle pictogram at its heart: this sign is probably one of the best known of all. If you see it at the beginning of a street, on a specific area or before a tunnel, it means that bicycles are prohibited from circulating there.

You have no choice but to turn back and find another route to get to your destination. Also called panel B9B, it is systematically installed at access points for motorways and expressways, on which a legal minimum speed (80 km/h on the motorway) is imposed. 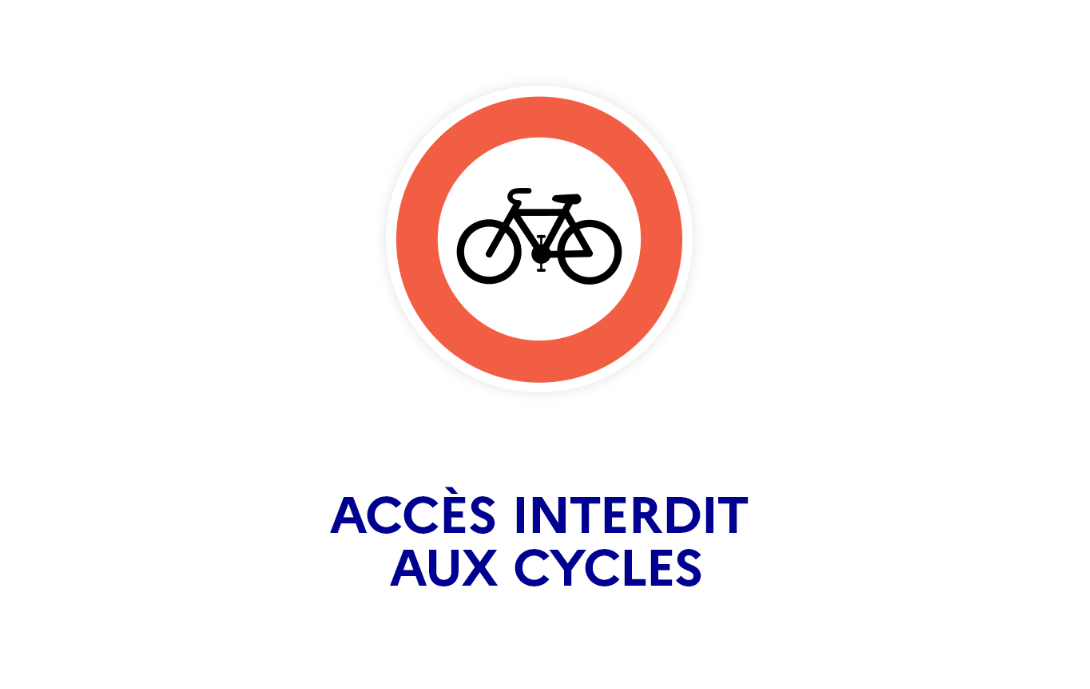 Unlike the prohibition sign, the circular sign with a blue background and stamped with a bicycle pictogram in its center is mandatory: if you cross it, you are obliged to use the lane or the cycle path. arranged for this purpose and which is logically on your way.

Known as B22a, this sign prohibits pedestrians from stopping or driving on said lane. The same panel crossed out with a red band (B40) puts an end to the restriction… but it can be supplemented by another panel which does not force you to ride on the cycle path, but warmly advises you to do so (see the following panel) . 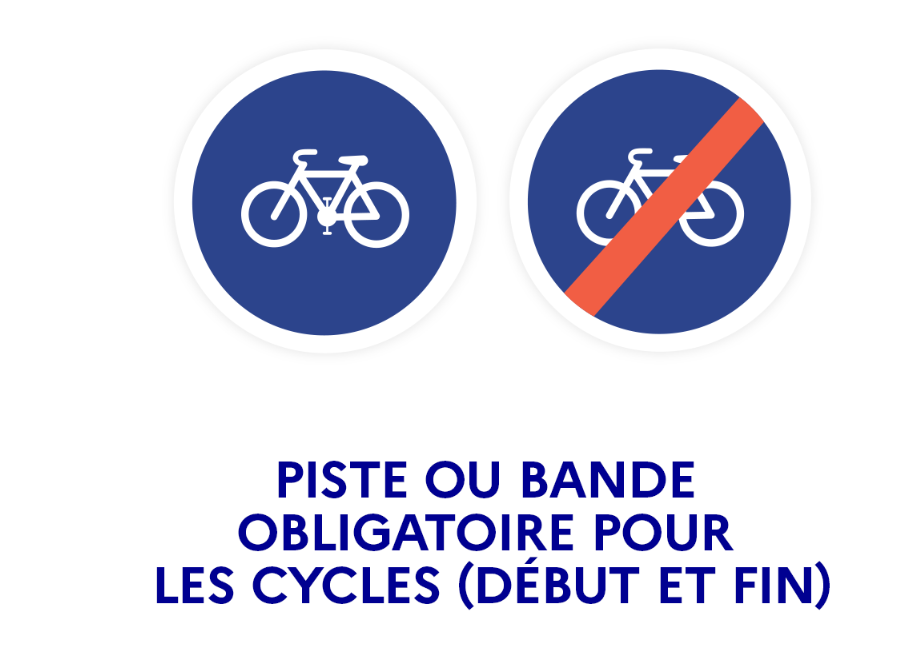 This time it is square in shape, but still with a blue background and a bike logo in the middle. To use the terms of the government, this sign (coded C113) corresponds to a “recommended cycle lane or path reserved for cycles”. Appeared in 2002, it does not indicate an obligation, but a recommendation.

However, it remains exclusive to cycles and prohibited for other users. But if you wish, driving alongside motorists is possible. The same panel decked out with a red diagonal stripe (C114) indicates the end of the section hitherto concerned. 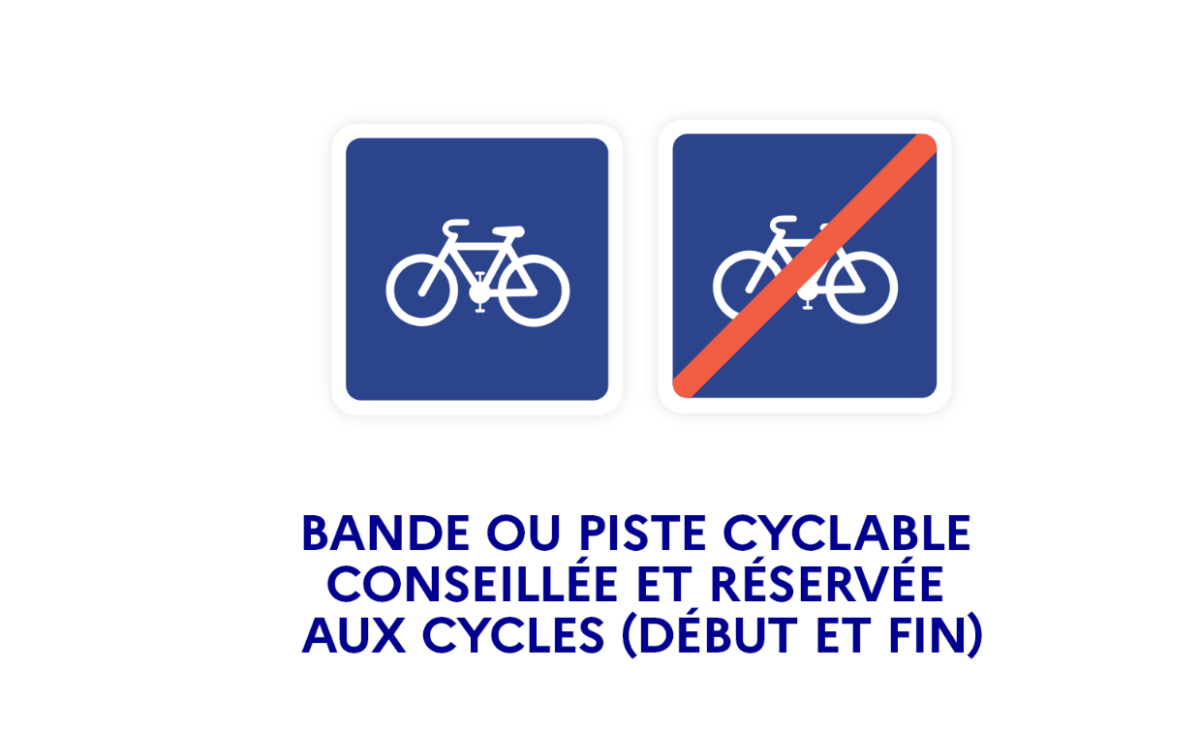 By its name, this sign (C24a) is relatively easy to understand: if you come across it at the beginning of a street, it means that bicycles are allowed to travel there in both directions, even if there is no cycle path. has been laid out for and that the street is one-way (no entry) for cars. On the other hand, motorists and scooters are confined to the only direction in force on the said lane. 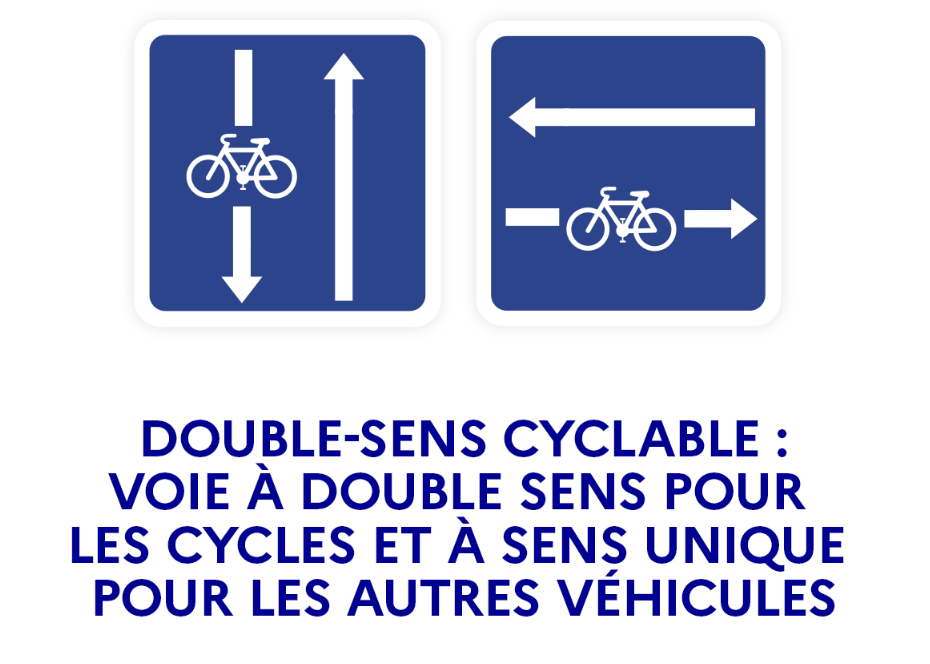 If you enter a so-called meeting zone, materialized by a panel (B52) with various pictograms (pedestrian, car, bicycle and limited speed), it means that all these beautiful people are authorized to move in the said zone. Be careful though, there are several small rules to know to avoid being reprimanded.

First, pedestrians have the right of way. It is therefore advisable to let them pass if one of them wishes to cross, for example. Vigilance is therefore essential. Second, the speed is limited to 20 km/h. This is an important point, since an electric bike is able to spin at a maximum speed of 25 km / h thanks to the assistance.

In this case, pay attention to your pace and your pedaling cadence. Finally, a meeting area is bicyclable in both directions. You therefore have no constraint to roll in one direction or another. 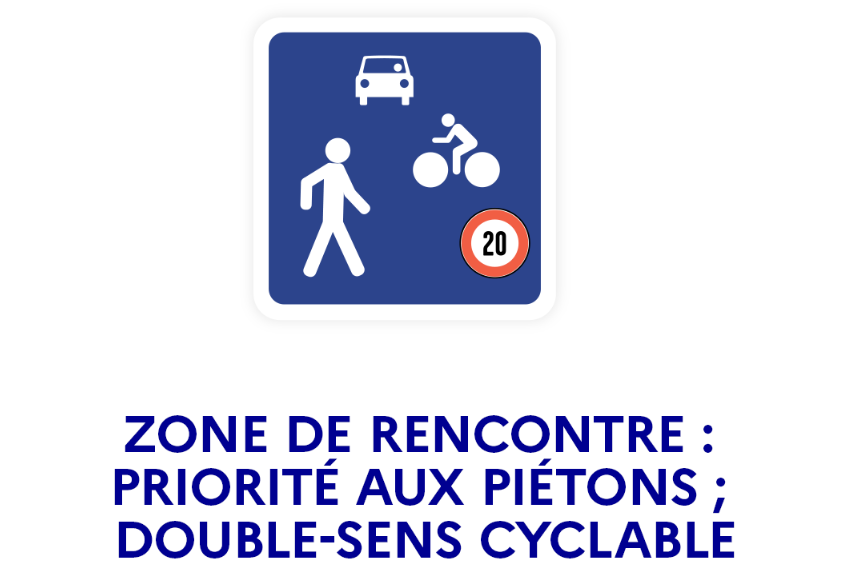 Don’t call it a sign, but a sign: this small rectangle decked out with a bicycle (named M4d1) actually completes a road sign indicating that the lane is also authorized for cycles. In the government’s example, this is a lane reserved for public transport, which is therefore also open to bicycles. 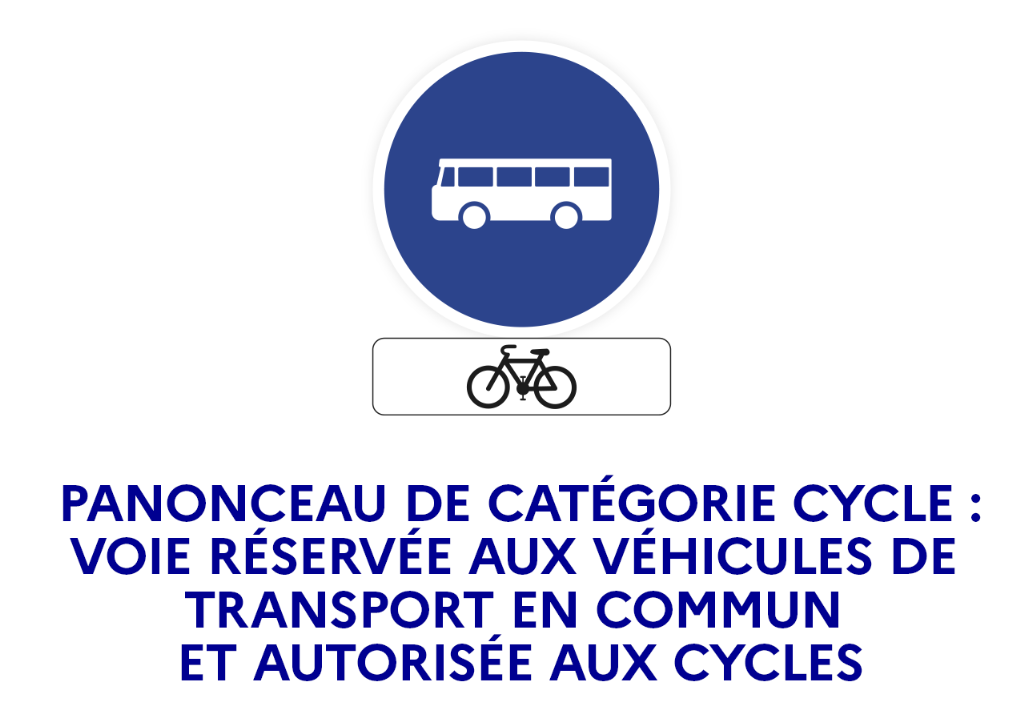 No entry… except for cyclists

Another example of a sign exists. This is the “Except bicycle”, the bicycle being represented by a cycle, placed just below a no entry sign. This rule is very simple to understand: the lane is prohibited to all road users, except cyclists. Also, floor markings for bicycles can accompany this signage. 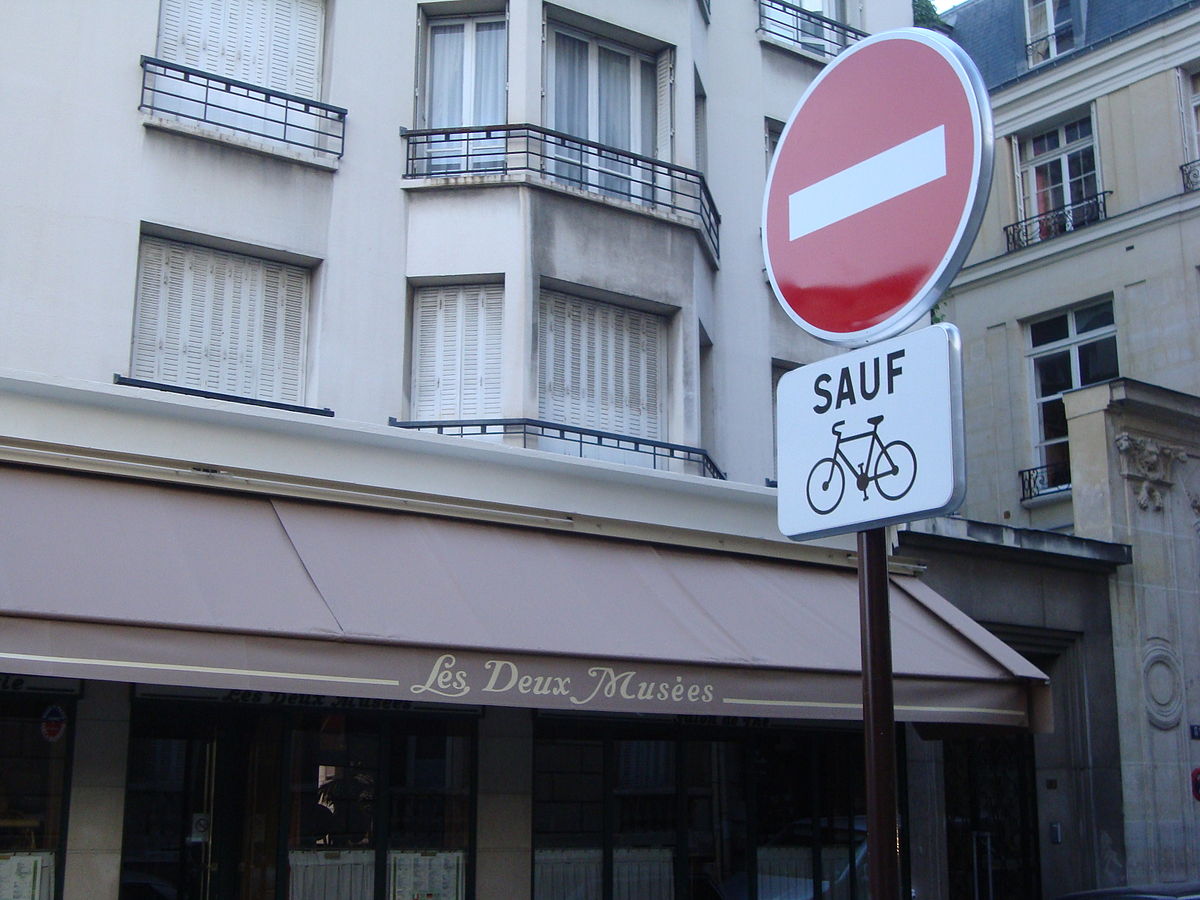 Signaling of a green lane

Appeared in 2008, the traffic sign for a greenway (coded C115 and C116) is reserved for pedestrians, horse riders and non-motorized vehicles. One might think that electric bikes are banned, but this is not the case, they are officially called “pedal assisted cycle”.

The same panel crossed out with a red band means that the area is no longer reserved for the users mentioned above: it is therefore likely that you will come across motorized vehicles afterwards. 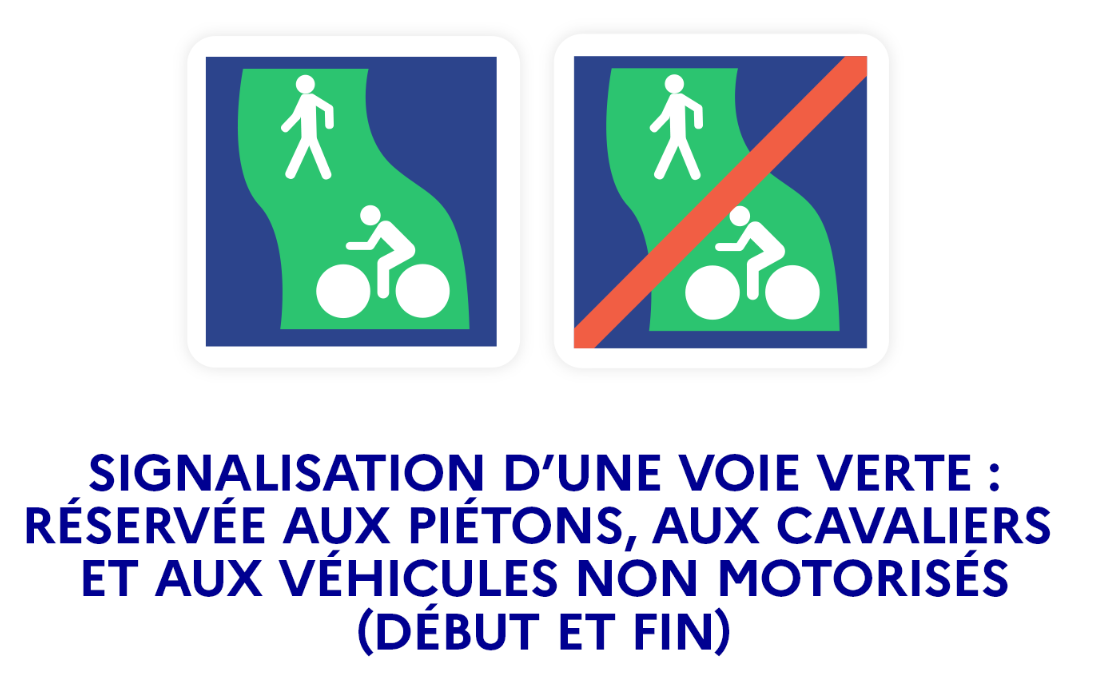 The exit sign for cyclists (A21) is not really aimed at cyclists themselves, but rather at cars and motorcyclists. It indicates that a cyclist can come from the right or the left, from a track or a cycle lane, at a distance of 150 meters in the countryside or 50 meters in built-up areas.

Vigilance to be favored to avoid any surprises and other mishaps.

On July 5, 2022, a decree was published in the Official Journal to integrate new traffic signals for cyclists into the Highway Code: this is the mixed pedestrian-cycle light, which intervenes when a cycle path is parallel at a pedestrian crossing when crossing a lane.

In this case, the traffic light “includes a visual of a red or green bicycle like the ‘red man’ or ‘green man’ to indicate to cyclists that they must respect the pedestrian light”, explains the government. This device had previously been tested in Strasbourg. 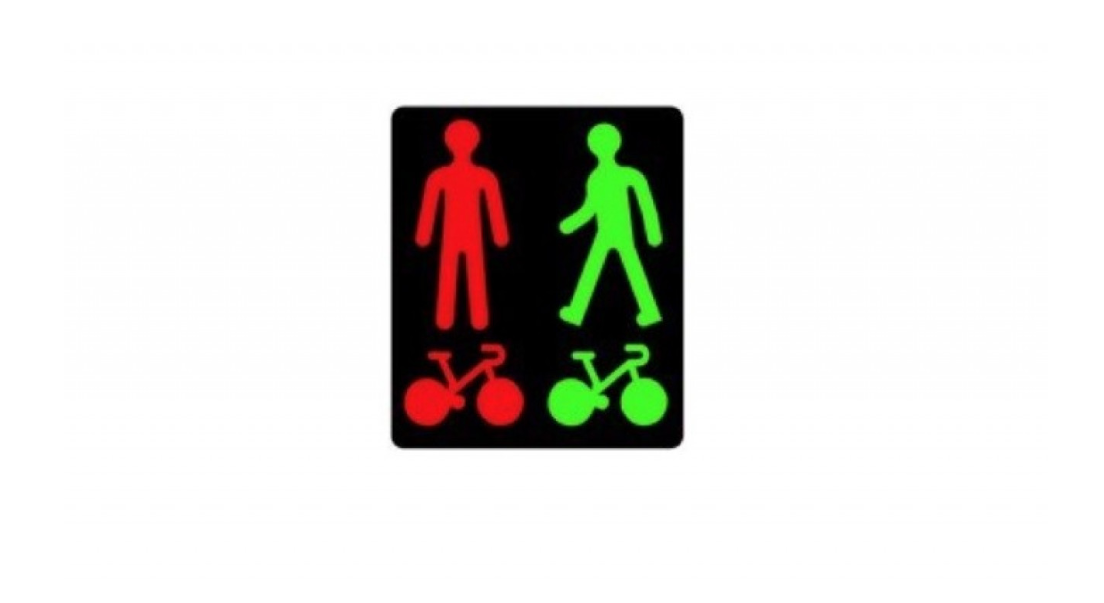 If an emergency vehicle (SAMU, firefighter, gendarmerie, police) is fully operational – that is to say that their sound and light warning devices are activated – you must give it priority. In this case, and as the national police reminded us on Twitter, crossing a red light or a stop sign is not considered an offense.

The example cited in their Twitter post concerns cars, but it also applies to bicycles. The latter have by nature a less imposing size, it is therefore also possible, in this case, to simply climb on the sidewalk to let the emergency services pass.

[PREVENTION] An emergency vehicle (firefighter, police, gendarmerie, samu, etc.) whose sound and light warning devices are activated, has priority! Make it easy for them. One day you might need it! pic.twitter.com/MjclheaC8K

In our German neighbours, a new panel appeared in 2020 to better protect cyclists and scooters. It prohibits motorists from overtaking this type of two-wheeler. On the lane concerned, it is therefore considered dangerous and prohibited to carry out such an overtaking.

Such an idea would not be too much in France on certain sections of road where the cyclist is considered to be vulnerable and more in danger in the face of this type of maneuver. 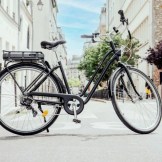 Have you decided to make your daily trips by electric bike? If your budget is not extensive, we advise you to take an interest in our selection of electrically assisted bicycles sold under the…
Read more

Will Blight Survival arrive on PlayStation 5 and Xbox Series X / S? The latest from the developers

This NVMe SSD for the PS5 is at a very good price!

Mikel Arteta: "My boys were phenomenal"