For The Elder Scrolls 5: Skyrim, an atmospheric mod has been released that rethinks all the sounds of the environment 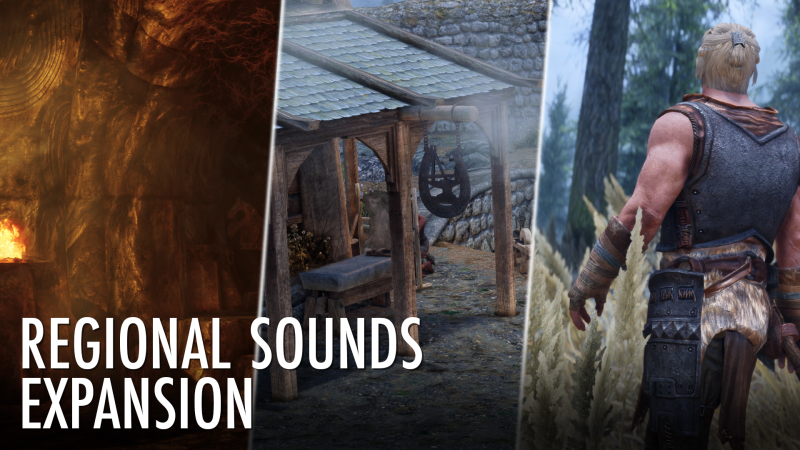 For The Elder Scrolls V: Skyrim, a wonderful Regional Sounds Expansion mod has been released, representing an extensive reworking of sounds for cities, dungeons and open areas. It’s based on the old Audio Overhaul mod, but extracts atmosphere-specific details from it and develops them to help truly fulfill the fantasy of actually being in the game’s world.

The mod offers “subtle and unobtrusive” sounds, but one that offers something “significantly brighter and more varied than what’s available in the base game”. Wander the tundra of Whiterun and you’ll hear the breeze sweep across the open grass fields as insects buzz and flutter through the wild. Travel to the Reach and you’ll encounter strong winds, the cries of eagles echoing through the mountains, and rocks falling from cliffs. Enter the swamps of Hjaalmarch and you’ll be stopped by a creepy, dead atmosphere filled with the cries of local amphibians.

On the other hand, pop into the nearest city or town and you’ll hear how the mod uses a mix of custom tomes and the game’s original, balanced audio set to replicate the hustle and bustle of Skyrim’s various settlements. You’ll hear residents going about their business, shouting in the distance, and “much more to mimic traffic in high traffic without feeling fake or unrealistic.”

4 series debuting this week that you can't miss

The best-selling LEGOs in France may not be what you think...

God of War: Before Ragnarok on PS5, here is the mobile game forgotten by all!

Bargains for the Christmas tree: There are curious auctions here that hardly anyone knows

Video for Bayonetta 3 – impressions of the character design