Starting December 2022, Starlink will limit the daily volume of the Internet – for customers who have used more than 1 TB of data 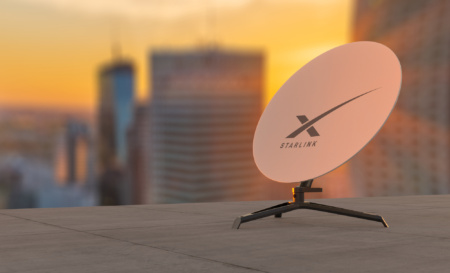 Starting in December, Starlink will start limiting home internet for customers using more than 1TB of data per month during peak hours within “Priority Access”. This change is being introduced under the new Fair Use Policy in the US and Canada.

The company will track internet usage from 7 am to 11 pm. If a customer exceeds the 1 TB limit (currently less than 10% of users reach this limit), they will be upgraded from “Priority” to “Basic” tier or disconnected from the tariff during severe network congestion during the rest of the billing cycle.

Customers who will use Starlink on RVs and mobile devices may not receive “Priority Access” at all, while there are different categories for Business account users or those who will use satellite internet service at sea.

As part of the new “Fair Use Policy”, Starlink has also detailed data limits and “Priority Access” rates for its business and mobile plans.

Starlink says its internet is a “limited resource” that will grow as more satellites are launched and that the company must “manage the network to balance Starlink’s supply with user demand.” However, the new data limits bring Starlink down to earth – to other providers such as Comcast, which has a 1.2TB data limit for many customers.

SpaceX previously announced that it would launch Starlink Aviation in 2023. The service will provide Internet speeds up to 350 Mbps for each aircraft, allowing passengers to play online games, access social networks and make video calls – something that was previously considered impossible during flights.

Overall, Starlink has had a busy 2022. The company launched the service for RVs back in May, and in July, Musk and company announced Starlink Maritime for boats, ships and yachts. In September, Starlink said it wanted to place its Internet service on rural school buses so that children could do their homework on their way to school.

Also, after the full-scale military invasion by Russia, Starlink terminals began to arrive in Ukraine, which became a vital source of communication for the Armed Forces of Ukraine. However, in September, SpaceX turned to the Pentagon, arguing that it could no longer finance the Starlink service in Ukraine (which, according to Elon Musk, costs about $ 20 million a month), and therefore asks the military department to take over the costs. The news of the company’s request comes amid Musk’s proposal to end the war by handing over Crimea to Russia and Ukraine’s neutrality, which drew heavy criticism. Perhaps the flurry of negativity made Musk change his mind: the billionaire later posted a new message on Twitter, in which he claims that his company will continue to finance the work of Starlink in Ukraine.

Starlink: it's the end of unlimited Internet by satellite without restriction

Will God of War Ragnarok have expansions, DLC or a sequel?

House of the Dragon: Episode 10 (Final) is on the Internet!