Jungle, jungle and more jungle. But what’s new: In our ninth D&D session, Davlin and Medea came with us into the jungle to balance out their boring fishing existence with one or two adventures. And it looks like they will be fishing a lot again in the future. You can read why in my diary!

One jungle for everyone, please

The heroes of my D&D campaign are still struggling through the jungle. At the start of our last session, they rushed back to the island’s capital, Kalarin, to buy the hermit Tyann Bloodsworn his desired coconut liquor. There they met Medea and Davlin. The two fishermen were quickly convinced that they should also experience a round of jungle adventures. For this Arianna separated from the group, because she has obligations in the city to fulfill. 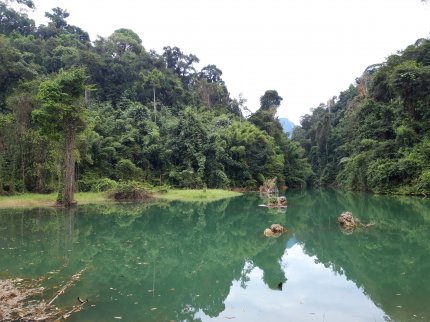 On a treasure hunt in Serpent Lake, Castiel bit a barracuda in the ass – no wonder he used himself as bait! (My secret: the fish wouldn’t have actually existed in the lake. I then added it extra because of Castiel’s idea of ​​fluorescent trousers) Source: Buffed And so it happened that Castiel and Nadia got the two jungle noobs Medea and Davlin from theirs previous experiences and showed them how to cope when traveling in dense South Sea island forests. Together they wandered south through the thorn thicket, fought some jungle creatures and searched for treasure in the Serpent Lake. (You’ll remember: the lake was home to the voracious Plesiosaurus.)

Davlin and Nadia walked along the shore while Medea and Castiel swam through the water. Since the adventurers couldn’t be sure if there was any other danger lurking in the depths of the water besides the Nessie monster, Castiel had a brilliant idea: he used magic to make his pants glow to act as live bait. Of course, a fish promptly bit him in the ass, which the group fought together. Overall, on their journey, they didn’t quite make it back to the hermit’s hut before we had to end the session for the evening.

It’s always a bit unfortunate when only some of the players present can actually play. When the group splits up on purpose and the story then jumps back and forth between the different parties, it’s different than when something happens with two players and the other two just have to wait until they’re part of the game again. Because last time Nadia and Castiel had to return to the capital to meet Medea and Davlin, we ended up in exactly this uncomfortable situation.

We refrained from any role-playing game, just quickly rolled the random opponents, rushed through the fights and crossed the days off the calendar without actually playing any of it. Nevertheless, it took almost an hour until all players could finally start together.

And even then, the session still felt a little bulky in the beginning; it was clearly noticeable that Sven and Dominik are more involved in the campaign and the story than the other two, who haven’t played regularly yet. Luckily, that feeling dissipated over the course of the evening. But what unfortunately remained: The knowledge that we wouldn’t be able to stop at a point where it makes sense for Medea and Davlin to leave the group again. Because why should the two of them turn around in the middle of the jungle and go back alone?

And then there were only three

This problem arose because Saskia and Lukas informed us that they both cannot play in November. Well, not all of November. Not at all, de nada. And in December, Saskia, at least, is unsure if she will find time for D&D. This opening initially caused long faces around the table, a restrained real-life rage from our barbarian and hectic planning in my head.

How are we supposed to end the session today if the two of them aren’t there next time? What do we do then – I designed the fights for four to five characters. How are Nadia, Castiel and Arianna supposed to survive alone? Don’t the harpies shred them if there are only three of them going into the harpy grove at level 3? Panic, panic, panic!

In principle, we came up with three different possible solutions, but we are not yet sure which of them it will ultimately be:

Balancing changes: Reduce the number of harpies in their dwellings. This works with the normal monsters, but the boss fights are still crisp to deadly in threes.Hire NPC mercenaries: Take NPCs from Kalarin with you as mercenaries so that they can help solve the island’s harpy problem.Hire player mercenaries: Other D&D Players from our circle of friends and acquaintances ask if they would like to help out as mercenary characters in between. 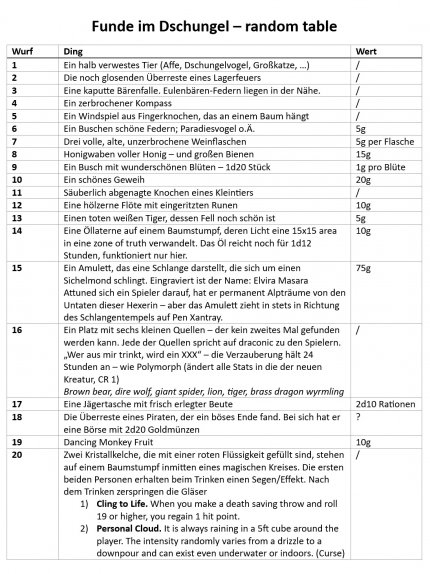 I really like using random tables for my campaigns. This one represents the finds my players can find in the jungle. For beach areas I have a separate list. Source: Buffed From the section “The top secret notes of the game master” I present this time: My random table for random finds in the jungle. Once per day, one of the players may make a Perception check while the party is traveling through heavily forested areas. If he rolls more than 15, he finds something.

In such a case, the player rolls his d20 again to find out which find from the list he has spotted in the forest. If something has already been found, I remove it from the list so that all of it can only be found once.

At the moment I’m rerolling repeating finds so that players have the opportunity to actually track everything down during their relatively short stay on Ko Rillan. For the list that I will use later for Pen Xantray, I planned it differently. If a row of the list is then rolled again, there is simply no find that day, despite a successful Perception roll.

The reason for this change is that players will spend a lot more time traveling on Pen Xantray than they do on the starting island now. And that’s how I can ensure that they don’t use up the list first and then there’s nothing left for them later.

Impasto is free on Steam: Goya-inspired horror is now available on PC

Thrash in Argentina. 10 dismissals in the final and early termination of the match

Discounted PC games on Steam: the best offers, even for less than 15 euros

Crazy costs: Avatar: The Way of Water is so expensive