For the first time in a long time, the tour turned out to be complete: without transfers. Shakhtar confidently beat Ingulets with an experimental squad. Major victories are also in the assets of Oleksandria, Veres and Dynamo. The leader of the championship – “Dnepr-1” – won a strong-willed victory over “Minaj”. Not a single draw was recorded in the round.

Vorskla midfielder Yurchenko is considered a full-time penalty taker. In any case, Vladlen’s nine previous approaches to the “point” were in his favor. However, the tenth, anniversary strike was inaccurate. More precisely, Yurchenko could not outplay Lvov goalkeeper Ilyushchenkov. And you can’t say that Vorskla’s player shot badly on goal – just an excellent reaction was demonstrated by the goalkeeper of Lviv.

After the end of the match “Vorskla” – “Lviv” a small conflict arose with the participation of representatives of both teams and the refereeing team. Lviv residents insulted the referees, accusing them of unprofessionalism, and the opponent – of “non-male behavior”. The incident resulted in a demarche by Lviv’s head coach Oleg Dulub, who did not attend the mandatory post-match press conference.

An excellent spectacle in Kyiv at the Lobanovsky stadium was given by Zorya and Metalist. The first half turned out to be “dry” in terms of the score, but quite “alive”: both teams created dangerous chances, but the goalkeepers played well. But after the break, five goals were scored at once. And for different tastes. Metalist scored first – Podlepenets converted the penalty. Churko equalized the score, but Panasenko again brought the nominal guests ahead with a classy blow. However, at the end of the match, the Luhansk team managed not only to restore the balance, but also snatch victory.

Zorya’s mentor van Leeuwen obviously guessed right with the substitutions in the match against Metalist. Mishnev, who entered the game instead of Kiryukhantsev in the 88th minute, scored a goal already in the 89th. And the winning point in the game was put by Shakhov, who replaced Buletsa in the 75th minute.

After the match against Leipzig in the Champions League, Shakhtar coach Igor Jovičević carried out a serious rotation of the squad for the league game against Ingulets. Bondarenko, Stepanenko and Mudryk weren’t at the start, but Kryskiv, Dzhurasek, Ocheretko and Nazarina came out from the first minutes. Sudakov played in place of Mudrik, and center back Bondar played on the right flank of the defense. Kryskiv also performed well, chalking up a goal+pass and earning a penalty.

The sum did not change due to the rearrangement of the “terms”: the Pitmen got a confident victory – 3:0. 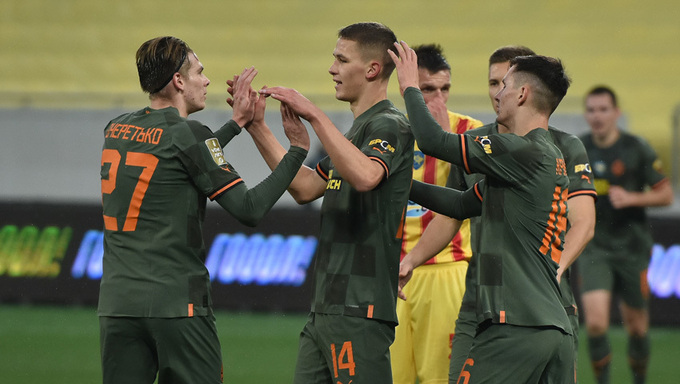 Shakhtar’s forward Sikan appeared on the field in the match against Ingulets at the beginning of the second half of the meeting – in the 57th minute he replaced Traore. But the apparent time limit did not prevent Daniil from becoming one of the heroes of the match. At first, he famously converted a penalty, and in stoppage time he put a winning point in the game.

In the match “Alexandria” – “Kolos” referee Kryvushkin appointed three penalties at once: two against the guests, one against the hosts. All three attempts were realized: Tretyakov and Rybalka (Alexandria) and the player of Kolos Orikhovsky distinguished themselves. Interestingly, in all cases, the appointment of penalty kicks is questionable.

The midfielder of the hosts Rybalka pleased with a classy long-range shot in the game “Alexandria” – “Kolos”. In the debut of the match, Sergei intercepted the ball from Orikhovsky in the middle of the field, moved a little closer to the guests’ penalty area and with a strong blow from his left foot plunged the ball into the lap with the bar. Volynets had no chance to save his team.

Veres got a confident and spectacular victory at the NSC Olimpiyskiy over Metalist-1925. The second goal of Yuriy Wirth’s wards turned out to be especially beautiful. And not only a goal, but the whole attack, which became effective. “Veres” perfectly interacted on the left flank of the attack, where both accurate passes and dribbles took place. Evgeny Pasich passed to Dakhnovsky, who with one touch redirected the sphere to Lebedenko, who sent the ball into the far corner of Sidorenko’s goal with a classy blow.

Metallist-1925’s goal against Veres turned out to be a feast for the eyes. And both a goal and an assist. Kurilo from the center of the field threw the ball into the penalty area for Rusin, and Rostislav sent the “addressee” exactly as intended with one touch: the ball ricocheted off the post and flew into the net. Very beautiful. It’s only a pity for the Kharkiv team that such a goal didn’t bring them tournament points.

The leader is visiting one of the outsiders – such was the sign of the match “Dnepr-1” – “Minaj”. However, despite the apparent difference in class, the Transcarpathian team gave a real fight to the Dnieper. It was Sharan’s wards who were the first to open the scoring – Vorobchak scored. But Minai led only three minutes in the score. Further, two goals of Kucher’s wards happened very quickly: Sarapiy and Gutsulyak scored. Amash’s goal closed the game. Thus, Dnipro-1 remained the leader of the championship, bringing its unbeaten streak to a record 16 matches.

All three goals in the game “Rukh” – “Kryvbas” – on the account of young football players. 19-year-old Voloshin scored for the residents of Kryvyi Rih, and for the Lviv team – the same age as Nazariy Sapuha and 20-year-old Slyusar.

Dynamo beat Chornomorets quite easily – 3:0. However, it is not so much the victory of Mircea Lucescu’s team that is indicative, but its movement in the standings. Prior to this round, the “white-blue” occupied only ninth place in the standings. And after the 11th game day, they moved to the sixth position. If the trend continues, you’ll see, and Dynamo will rise to the top three.

What are the best GPS trackers for car in 2022

Meridiem Games will publish the quirky animated adventure The Many Pieces of Mr. Coo

Ukrainian judoka won a medal at the U23 European Championship