Today, November 7th, is N7 Day again in honor of the Mass Effect universe. So the perfect opportunity for the developers at Bioware to give the waiting fans a new look at the progress of work on the upcoming Mass Effect. Accordingly, the long-awaited game is also a central topic in the blog entry that the makers published on their website today. However, if you hope for concrete information about the game, you will be disappointed. The game is therefore still in pre-production, which is making good progress. The team responsible is constantly growing and is busy designing new characters and locations.

However, rather than revealing specifics about the game’s content, this year’s blog post focuses on some of the key figures behind the project. In addition to Project Director Mike Gamble, a Bioware veteran who has been with the company since Mass Effect 2, Development Director Danielle Enns, Narrative Director Mary de Marle and Creative Director Parrish Ley are also introduced. The developers remain vague about when the first concrete information about the game will be available. “One day, when we’re ready, we’ll be able to share more about the next Mass Effect,” the blog says.

That would be a surprise: is Shepard returning in Mass Effect 5?

Mass Effect 5 RPG fans may be in for a big surprise in the form of a comeback from Shepard.

The developers at Bioware are now talking about an early development phase for the next Mass Effect.

Part of the article on the official website is also a greeting from project manager Mike Gamble. This is mainly about the great community and how the relationship between fans and developers has grown steadily in the almost 15 years since the first Mass Effect. He concludes his message by pointing out a new concept art released to mark N7 Day. However, observant fans will notice that the picture that you also see as a lead at the beginning of this news is not that new. The same image was featured in the book “25 Years of Bioware” which was published about two years ago and was personally photographed by Mike Gamble almost two years ago shared on Twitter. In the version that has now been released, only the background has been redesigned and some details have been worked out further. 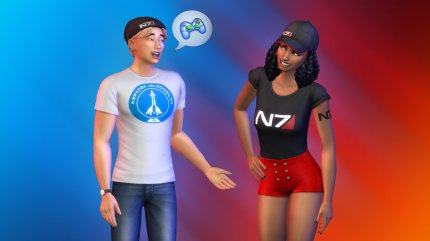 Free Mass Effect clothes in The Sims 4. Source: Electronic Arts On the other hand, the clothes that will be available for free download in The Sims 4 from November 17 are new. You can use it to dress your Sim in themed N7 or Andromeda Initiative t-shirts, matching hats, and even N7 tattoos. If you’d rather have real merchandise for your personal collection, you can stock up on special N7-Day promotions at the Bioware Gear Store, Sanshee, Dark Horse and Volante. There is also a discount campaign for the Mass Effect Legendary Edition in the EA Store and on Steam. So if you don’t have the legendary trilogy yet, you can now access it at a reduced price.