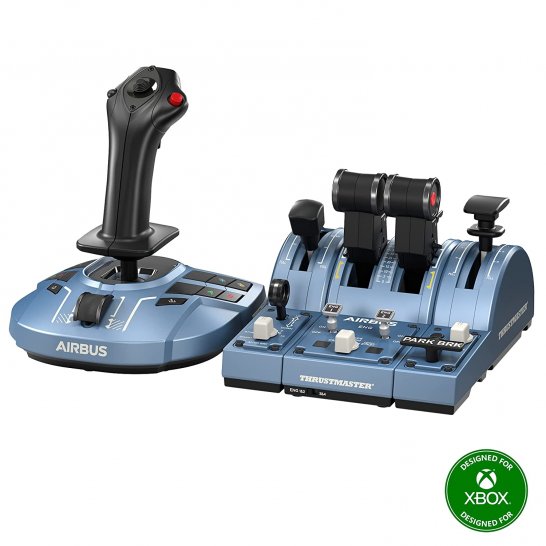 07.11.2022 at 08:02 by Claus Ludewig – In order to be able to control the Microsoft Flight Simulator better, Thurstmaster offers new Flight Sticks, which are official replicas from the Airbus A320 and A320 Neo.

Microsoft Flight Simulator recently received support for DLSS 2, and DLSS 3 will follow later. When presenting the RTX 4090 & Co., Nvidia itself also showed DLSS 3 for flight simulation, with the fps number supposed to more than double. In addition to the graphics boost for PC players, an adequate control unit is also recommended in order to be able to control the flight simulator accurately. Thrustmaster has now released the TCA Sidestick X Airbus Edition and the TCA Captain Pack X Airbus Edition.

New edition from the price-performance winner in the PCGH test

Both the sidesticks and the quadrant are replicas of the control unit of an Airbus A320/A320 Neo. With the new ecosystem hub, the products should be easy to connect to the PC or Xbox Series X|S with just a single USB cable. The predecessor Thrustmaster TCA Sidestick Airbus Edition was able to leave the field as the price-performance winner in the PCGH test.

Above all, the very good equipment including axle lock and reverse thrust as well as the ergonomics of the joystick were convincing. We described the small thrust lever as in need of improvement. The manufacturer has taken up exactly this point of criticism and would like to supply an improved thrust lever with the TCA Sidestick X Airbus Edition. There are also new pushbutton switches.

In the Thrustmaster TCA Captain Pack X Airbus Edition package, which costs 300 euros, the new sidestick is combined with a four-axis thrust lever quadrant. With the Ecosystem-Hub you can also combine the control unit with Thrustmaster rudder pedals. According to the manufacturer, if you only want to buy the new Sidestick X Airbus Edition, you have to pay just under 120 euros. If you use the Microsoft Flight Simulator (buy now €69.99), the Thrustmaster peripherals should be recognized automatically, the manufacturer promises.

Also worth reading: Flight Simulator: Sim Update 11 with DLSS 3 has an appointment

Collection for the new Thrustmaster joystick:

Thrustmaster has now launched the €120 TCA Sidestick X Airbus Edition and the TCA Captain Pack X Airbus Edition. In the €300 Thrustmaster TCA Captain Pack X Airbus Edition package, the new sidestick is combined with a four-axis thrust lever quadrant With the new Sidestick X, the manufacturer wants to have taken on the criticism from the PCGH test and is equipping the price-performance winner with a new, small boost lever. In connection with the Microsoft Flight Simulator, the new peripherals should be recognized automatically.

Media: Twitter and Elon Musk ask some of the laid-off employees to return

LEGO: No need to have a green thumb to take care of this bouquet!

Source: Kryvbas does not plan to fire Vernydub