The American companies Valve and Google have launched beta testing of the digital game distribution service Steam for the ChromeOS operating system. The companies have unveiled ChromesOS 108, which has an improved interface, increased performance and compatibility with more games. 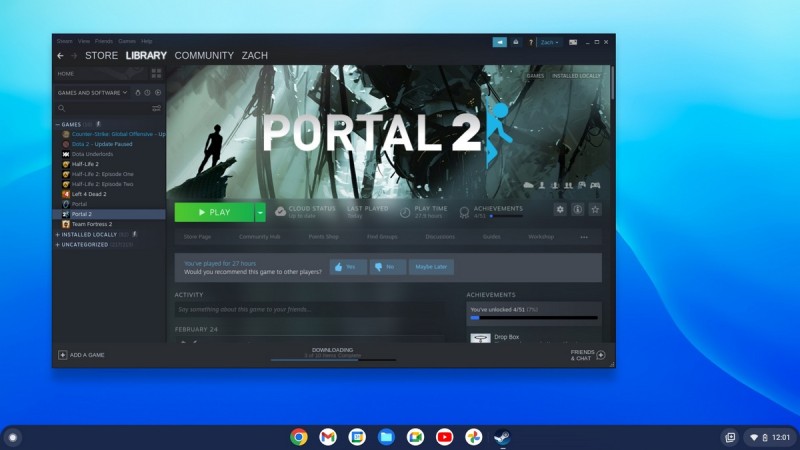 The minimum system requirements for SteamOS processors are AMD Ryzen 3 and Intel Core i3 with 8 GB of RAM. This feature triples the number of supported devices relative to alpha testing. In particular, ChromeOS is used by a number of laptop brands from Acer, ASUS, HP, Framework, IdeaPad and Lenovo. However, for the best gaming experience, Google recommends using a Ryzen 5/i5 with 16GB of RAM.

ChromeOS supports running games for Linux and Windows. If the user has selected a game, then the system launches its Linux build, if it is missing, then the OS offers to install the Windows version, which requires the use of the Proton layer, which is based on Wine, DXVK and vkd3d. The game runs on a virtual machine with a Linux environment, it is implemented on the CrosVM subsystem, which uses the KVM hypervisor.

In the new build of ChromeOS, Steam laptop battery status indicators have been updated to notify users in full-screen game mode. In addition, the company improved battery life by reducing CPU usage while using the DirectX and Vulkan graphics APIs.

Steam on ChromeOS has improved the scaling system to improve performance on QHD and UHD displays. Another 50 new projects have been added to the list of recommended games, the list will continue to grow.

Alpha users will need to uninstall and reinstall Steam for the changes to take effect. Google has released a test build of ChromeOS with support for the Steam client.