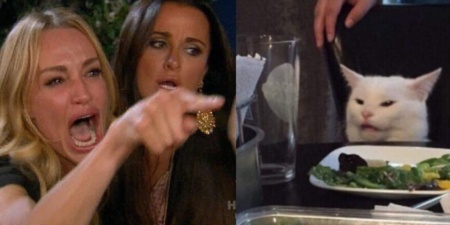 There are one-day memes that quickly get bored and lose their relevance, and there are memes for centuries – over the years they only get better. The “woman yelling at a cat” meme / Woman Yelling at a Cat certainly belongs to the second category, and soon those who wish will be able to get this legendary meme as an NFT into their collection at an auction held by the Ukrainian humanitarian fund Unchain.Fund.

Unchain is holding an auction, but not the owner of the meme – the fund promises to transfer its share of the sale (25%) in full to help Ukrainian families with children affected by Russian missile strikes. The remaining 75% will be divided among themselves by Taylor Armstrong, the Smudge cat family and the Ukrainian agency Zlodei, which took over the organization.

The auction will take place in Los Angeles on November 18 – the event will begin at 13:00 New York time (at 6:00 Kyiv time), and its visitors will be able to take pictures with the famous Woman and the Cat, at whom she screams. 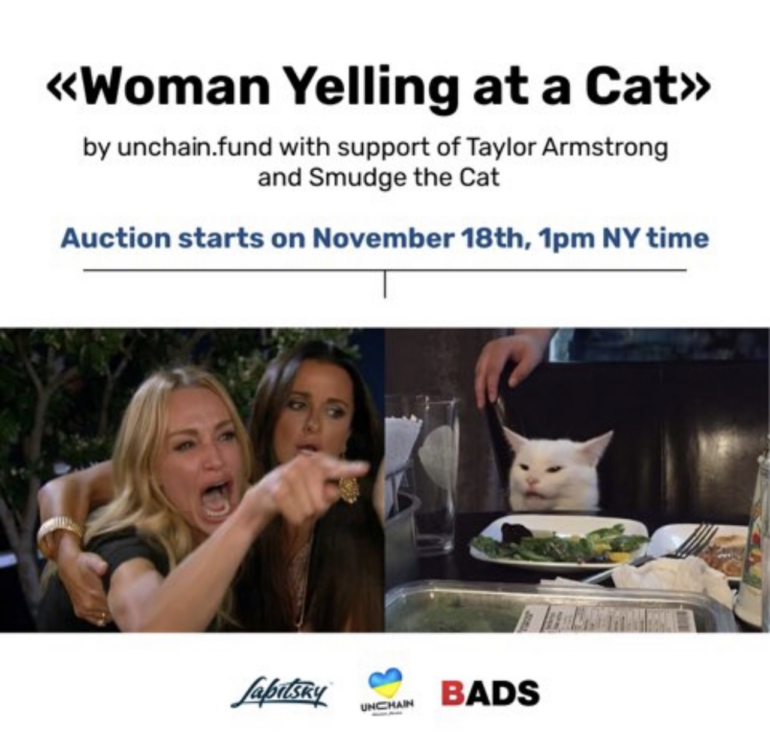 The “Woman yelling at a cat” meme combines two separate pictures: first, a frame appeared with the star of the TV show “The Real Housewives of Beverly Hills” Taylor Armstrong. An image of a frustrated cat Smudge sitting at a dinner plate first appeared on Tumblr in 2018. Then in 2019, someone thought of combining these two images, after which the meme gained immense popularity, and in 2020 it even won the “Meme of the Year” award. Since then, this meme and its many variations have been used to illustrate quarrels, scandals, and “fights”.

Yes, at the moment the NFT market has practically ceased to exist, when compared with the activity and volume of transactions at the beginning of the year. At the same time, many believe that in the future interest in NFTs will revive with renewed vigor. In addition, we can recall a successful example with such a charity auction – at the beginning of the year, the Ukrainian advertising agency Zlodei Advertising (BADS) sold the popular Coffin Dance meme as an NFT and donated $ 250,000 of the proceeds to the Come Back Alive charity foundation.

Viral meme Coffin Dance was sold as an NFT for $1.048 million, with a portion of the proceeds going to the Come Back Alive Foundation

Unchain Fund is a Ukrainian charitable foundation based on blockchain technologies. Since its founding on February 24, the Unchain Fund has provided more than $9.3 million in humanitarian assistance to more than 400,000 Ukrainians.

Activision-Microsoft, the agreement is in danger of jumping? The revelations of the New York Post

Fiat 500: its sports version is revealed without its knowledge and it makes you want

Mercedes EQS: charging cost and range over a long journey of 850 km – Frandroid