After playing through the intro quests after arriving on the Dragon Isles, you can start directly with the story campaign – at the same time as the various side quests. In the second chapter of the Dragonflight campaign in the Azure Mountains, Troubles of the Tuskarr, you enlist the help of the Walrusmen in investigating the ley lines needed to empower the Azure Boar Stone. This story follows the Plains of Ohn’ara campaign.

WoW Dragonflight: In this special we introduce you to the ninth chapter of the story campaign, Into the Archives!

In the following picture gallery you can see the complete 10th chapter of the Dragonflight story campaign with all quests and NPC dialogues (see the chat box on the bottom left), which contain a lot of story details. Warning, spoilers!

WoW Dragonflight: Sorrows of the Tuskarr – Chapter 10 of the Story Campaign (1) [Quelle: Buffed]

Troubles of the Tuskarr – Story Summary

Below you can read the original lore summary from the quest log.

You encountered a few tuskarr willing to assist you in investigating the ley lines, and located a caravan that their leader, Brena, was traveling with.

The caravan had been ambushed by a group of gnolls, taking several members prisoner. Brena asked you to help her defeat the gnolls and rescue her friends.

You were able to rescue the missing Tuskarr, but in the process you encountered something disturbing. Apparently, the gnolls used decay magic to plague and corrupt the surrounding lands. Distraught, Brena went to investigate the supposed source of the decay: Brackenfur Cave.

With brena and kalecgos, you lay the spirits of fallen tuskarr to rest and do all you can to bring down an ancient that the gnolls had infected with decay. After the Ancient was defeated, Kalecgos was able to restore the ley line. 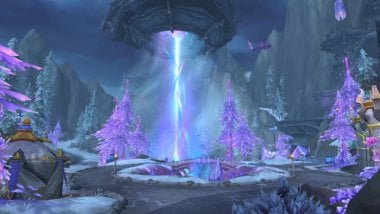 Structure of the campaign in Dragonflight

Currently, you cannot reach level 70 in the Dragonflight Beta simply by completing the campaign. So you also have to play dungeons and/or complete side quests.

The first gate takes place with the Azure Mountains chapters where you need to be level 66 to continue the Dragonflight campaign. However, you’re safe if you complete at least 3 dungeons at level 60 and above, and you don’t have to do side quests.

Windows: how to delete unnecessary files on disk