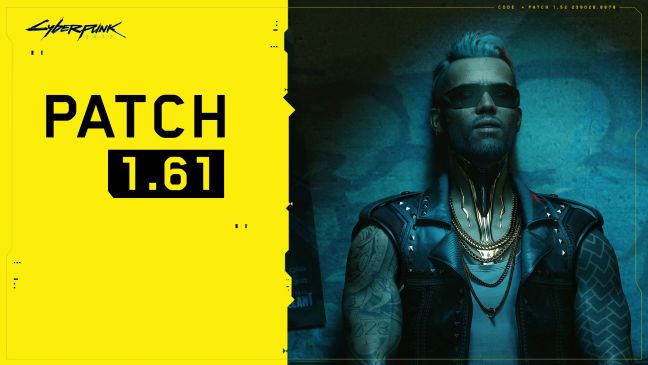 The last update 1.60 with the Edgerunners content wasn’t that long ago, and the next update for Cyberpunk 2077 is already available. Patch 1.60 is coming to PC, consoles and Stadia later today and again brings some bug fixes.

Again, some bugs in quests and open world are fixed, also V’s breasts are chastely covered again. Gameplay and graphics are also fixed and some issues with cross-platform saves are fixed.

Here are the patch notes for update 1.61 for Cyberpunk 2077 in detail:

The Beast in Me – Fixed a bug that incorrectly showed player position as 1/6th instead of second place. Resetting the key bindings to default only took effect in the game after restarting/reloading. This bug has been fixed. Fixed the bug where the inventory would sometimes scroll up and down very quickly after dismantling or dropping an item.

Fixed the issue with temporary FPS crashes when exiting menus. Achievements were not granted in the Epic Games Store even though all requirements were met. This bug has been fixed. Note: If you have already met the requirements in a previous save, you may need to repeat this in a new save or a previous save point where you had not yet met these conditions. The loading menu should no longer get stuck when playing the game offline via GOG. Upgrading items to a higher rarity would crash the game. This bug has been fixed.

Fixed a bug that prevented pausing when gameplay was suspended.

Now supporting: AMD FidelityFX Super Resolution 2.1 (PC and next-gen consoles only). Under certain circumstances, Judy could disappear from the game while in her apartment. This bug has been fixed. Wardrobe interactions in the Nomad Camp were duplicated after waiting there. This bug has been fixed. It is now no longer possible to play horizontal arcade machines. Cyberpunk 2077 – First Look! Cyberpunk 2077 with NVIDIA DLSS 3 & Ray Tracing: Overdrive

Cyberpunk 2077 is said to be even more beautiful, improved by the new Ray Tracing: Overdrive mode and up to 4x performance increase with NVIDIA DLSS 3.

Overclockers.ru: High-speed races in the fresh gameplay of Need for Speed ​​Unbound