GOVOROVA: “I was not ready for war. Woke up frightened by the explosions

Famous athlete, Olympic champion Olena Govorovawho works as the deputy head of the KMDA and is responsible for the development of sports in Kyiv, spoke about the first days of the war and her participation in charitable aid to Ukraine:

“Sport today is at a completely different level, it has new tasks. We are not talking about sports achievements. One of the main tasks is rehabilitation, stress relief, support of physical and psychological health of children and adults. Therefore, even in the conditions of war, we must organize the sports process, which must be as safe as possible.

If we recall those first, most terrible days of the war, the main thing was to organize the evacuation of athletes. The phone didn’t turn off 24/7: parents, coaches, sports schools – everyone asked: what’s at work, where to go, how to be. Issues were resolved impromptu, and people were sent to safe places as quickly as possible.

When it became safer, around May, people began to return to their homes, particularly in Kyiv. We gradually started to resume the training process. Then the Ministry of Youth Sports recommended to start the competition. It was necessary to act carefully: to calculate in detail how the city would return to sports, to adapt to safety rules, in particular to equip a shelter.

In some sports halls, we cannot currently hold training sessions, we decide every day how to start them. But the children still train. I can’t add anything else for security reasons. We remember: the Russians destroyed more than a hundred sports facilities throughout Ukraine.

Personally, I was not ready for war. I did not believe that this could happen in the 21st century, I thought that those people still have intelligence. I was wrong.

The first weeks in Kyiv, they slept in tracksuits, woke up from explosions, scared with square eyes. I covered the child with myself, not understanding where to run and what to do. It seems to me that all people were in this state.

My son is nine, we live together with him. For me, the main thing was to protect Bohdan from the war not only physically, but also psychologically. I understood that I cannot relax or panic. The son still felt my condition at his energy level. I had to demonstrate that we will endure everything, everything will be fine, that there will be victory, but we have to be patient for a while.

After some time, my son and I moved to the west of Ukraine, because my child stopped eating. In general, he didn’t even touch the candies. I understood that he keeps everything to himself, does not show: such a small man. In Uzhgorod, my son gradually began to recover: to communicate, to return to his usual routine, and most importantly, to eat normally.

Despite the constant sirens and poorly arranged life – we often had to spend the night in the corridors of the hotel – we found time for sports. On drops of a peaceful life, like sports exercises. Gradually, the son started playing football. But, unfortunately, there was a break in studies for six months. 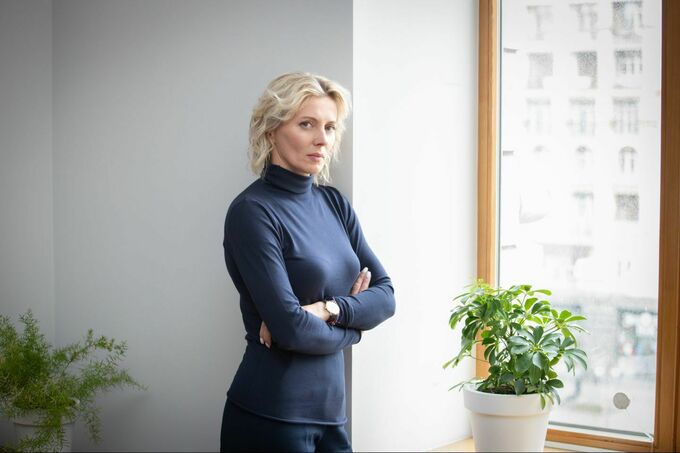 In Uzhgorod, I headed the humanitarian headquarters of the National Olympic Committee (NOC). Bohdan learned how to unload a humanitarian truck, count pallets, was by my side 24 hours a day. The son gained experience, which is difficult for such a young age. He grew up very quickly.

The humanitarian headquarters of the NOC is still working. And at the beginning of March, the head of the NOC, Serhii Nazarovych Bubka, called everyone, wrote letters to companies, businessmen, and friends. He asked for help for Ukraine all over the world.

People responded actively: they handed over things, medicine, food. We further contacted the regional committees of the NOC, our branches, and transferred the cargo to the points that most needed help. Where there were active hostilities: Kyiv, Chernihiv, Kharkiv, Mykolaiv, Odesa regions. Help went to children and adults. To this day, we still receive cargo and all the time try to get it to people as quickly as possible.

It wasn’t exactly my field of activity, I’ll be honest. But the war did not ask. It was necessary to learn quickly, establish communication, understand logistics. There were many professional wonderful people around who came to help and solved the most difficult issues in an hour.

We established friendly relations with Ukrzaliznytsia and Novaya Poshta. In the summer, we received high-quality baby food from abroad in glass jars. But we didn’t have enough space to store it in the heat. Thanks to Nova Poshta, children’s products went to the regions within a few hours. I remember when there were active battles near Chernigov, we really needed to deliver cargo for the people who suffered the most. It was practically impossible to do.

For some time, this cargo had to be stored in Kyiv, so that when the opportunity arose, it could be transferred along those transport corridors that were opened. Where to store it? How to load when the truck arrives? Heorhiy Zantaraya, deputy of the Kyiv City Council, came to the rescue and very quickly set up the process.

We cooperate with the head of the Transcarpathian Regional State Administration Viktor Mykyta. When the son of the Spanish sports official Juan Antonio Samaranch handed over a truckload of quick-frozen products for the Ukrainians, they had to be transported in a refrigerator, which we did not have. In 15 minutes, the head of the State Administration solved the problem.

Now there is a great need for children’s winter clothes and food. Serhiy Bubka again called for help, and the other day we received a large shipment from America. Warm things, shoes, medical supplies have arrived.”

Horizon: Report: MMORPG from the Guild Wars makers in the works

COD Modern Warfare 2 and Warzone 2.0: how to unlock crosshairs with the blue dot

Sports Story: The fantastic world of golfing adventure arrives on Switch in December