Astronomers from the University of Warwick in the UK have discovered the oldest fragments of Earth-like planets in our galaxy. The stars, around which the remnants of planetary celestial bodies circle, are only 90 million light-years away from us. These are the oldest planetary systems discovered in the Milky Way, and they died 5 billion years before the birth of a star called the Sun. 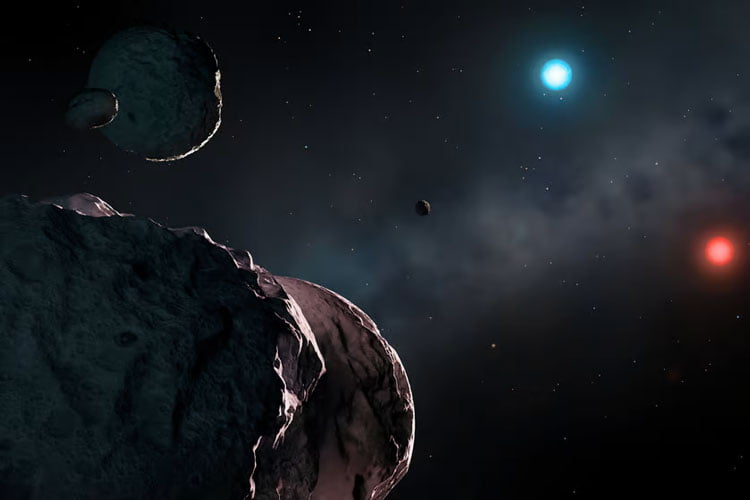 The fate of 98% of the stars in the universe we see ends the same way – after burning all the hydrogen, they turn into red giants and shed their outer layers, after which a dense core known as a white dwarf remains. The hot shell and the shock wave caused by the ejection process destroys planets in the orbit of stars. Ruins remain in the stellar system, which are gradually drawn in by the star and pollute it (the expanding outer shell of gas and dust intensively slows down orbiting objects and causes them to fall quite quickly on the star).

Spectral analysis of such processes makes it possible to determine the chemical composition of celestial bodies falling on a star and to model the planetary composition of stellar systems. Astronomers have done this work with two white dwarfs, one of which is observed as a blue glow object, and the other is red.

With the help of data from the European telescope GAIA and a number of other astronomical instruments, it was established that the white dwarf with a blue glow WD J1922 + 0233 was formed about 9 billion years ago (then the local planetary system died). Spectral analysis revealed chemical elements identical to those found in the Earth’s continental crust.

A white dwarf with a red glow WDJ2147-4035 turned out to be completely mysterious. It is he who is 90 million light years away from the solar system and can be considered the star of the most ancient star system discovered in the Milky Way. It became a white dwarf about 10.2 billion years ago, and originated somewhere 500 million years before that. An analysis of the spectrum of WDJ2147-4035 showed that the star is rich in planetary debris in the form of sodium, lithium and potassium. And this is a big mystery, because at that stage in the evolution of the Universe, these and other metals should have been much less than spectral analysis shows.

By the way, astronomers consider as metals everything that is heavier than hydrogen and helium. Oxygen, carbon and other gases are also metals for them. Metals are born during the evolution of stars and are carried throughout the Universe after their death. From them, again and again, new stars, planets and everything that we can observe around us and in space are assembled.

In addition to the extremely large number of metals in the spectrum of the “red” white dwarf, this object has a number of other mysterious properties. Firstly, it is the coldest of all white dwarfs discovered (the temperature on its surface is only 2777 ° C) and, secondly, it has a magnetic field. This combination of properties inexplicable by modern theories allows us to learn something new about the evolution of white dwarfs and gives hope to learn a little more about the Universe.

We analyze the psychological profiles of Kratos, Ellie, Arthur Morgan and James Sutherland

Gareth BALE: Head coach’s speech at half-time made the difference