Call of Duty: Warzone 2.0 is about to arrive, with a release date set for November 16, 2022, while also Modern Warfare 2 prepares for the advent of the new era with the launch of the Season 1 for both titles in question, details of which emerge between content and new Battle Pass.

The new version of Activision’s free-to-play shooter will focus on the new map Al Mazrah, featuring 18 major points of interest in which to concentrate the battles between players in Battle Royal or to explore to find a route to extraction in the DMZ mode. The city of Al Mazrah of the Republic of Adal is therefore the first setting of Call of Duty: Warzone 2.0 and has several sub-sections of some relevance:

Will still be present i loadout customas in the first Warzone, allowing players more immediate access to war gear set according to different needs. 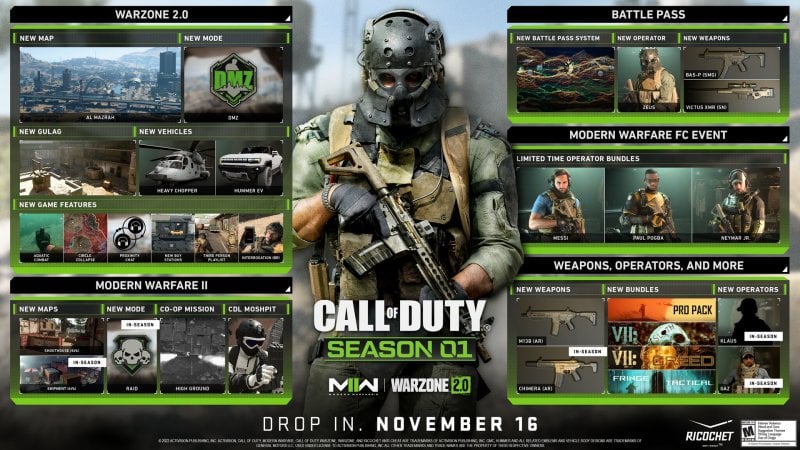 The biggest advantage is given by the Primary Weapon, with the weapon and loadout that can be obtained through shops, dedicated public events or by completing Strongholds and Black Sites.

Expected a new Backpack system, fully integrated into the DMZ mode in addition to the Battle Royale. In the latter, as in the first Warzone, the Supply Boxes will be present to obtain weapons and items. When a player dies, he drops his backpack with the primary weapon.

Il Gulag got some variations, with a setting that features 2v2 battles with random teams that have to coordinate to take down enemies. All players get a default loadout, with Pistol or Shotgun on launch, a lethal grenade and a tactical grenade, with high-powered weapons and equipment placed in the center of the map. In the Gulag there will also be a Jailer, who appears during the match to speed up Los against: by defeating him, he will return all four prisoners directly to the Battle Royale, which can lead players to work together to defeat the latter instead of clashing with each other. .

The DMZ mode is a new game option that places us within the open world map, with a narrative cut that places the teams of operators in search of an escape route. Teams must complete various faction-focused missions, take part in secondary objectives and fight against enemy or AI-operated operators, as well as search for materials, weapons and items and survive until recovery.

Other innovations also concern the combat in water and the vehicles, with a new fuel management system. Among the new vehicles we find ATV, UTV, Hatchback, SUV, GMC Hummer EV, Cargo Truck, Light Helo (a light helicopter), Heavy Chooper (heavy helicopter), RHIB (tactical water vehicle) and Armored Partol Boat, a heavy boat. armed. As for Call of Duty: Warzone 2.0, the date and time of preload and opening of the servers have also been announced.

Call of Duty Warzone 2.0: date and time of preload and opening of the servers

One ship, two, three in Genshin Impact: how to pass and what to answer Lin Lin pro

Vladimir BRAZHKO: “There will be no passing matches at Euro 2023”