Because of Musk’s decision to verify accounts, Twitter is already flooded with fake accounts and misinformation 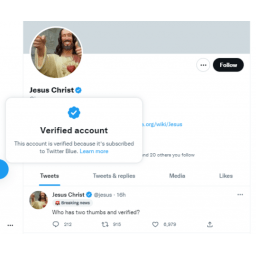 Hours after Twitter began offering blue tags for $7.99 a month, tweets from fake but “verified” accounts flooded the platform.

It didn’t take long for Elon Musk, the new owner of Twitter, to spoil his new $44 billion toy. He made a few changes, promised a lot more, but what resulted from his controversial decision to make the platform offer the famous blue ticks to anyone willing to pay for them is quite a mess.

As expected, some took advantage of the opportunity offered to easily get blue ticks. Hours after the change announced by Musk went into effect, the platform was flooded with fake accounts, from the account of Jesus Christ (fake but verified) to the fake but also verified accounts of James LeBron, Valve and Nintendo.

Most of the fake accounts were removed, although some remained on the platform for hours despite Musk’s insistence that fake verified accounts would be dealt with quickly to mitigate the damage they could do.

The new blue badges are not the same as those awarded before Musk took over the company. If you click the blue tick on the account’s profile page, a window pops up telling you if the account is verified because it belongs to someone because of the importance it holds, or if it’s because the account owner has paid for a Twitter Blue subscription.

Twitter, meanwhile, backtracked on its decision to take away blue badges from accounts that already had them and don’t want to pay to keep them. Twitter’s new verification help section indicates that pre-Mask blue ticks will remain even if their owners are not members of the Twitter Blue subscription model. But Twitter won’t be giving new blue ticks to prominent accounts whose owners don’t want to pay, and they “can be revoked at any time for any reason.”

Even if you want to pay the check, you still may not be able to. According to Twitter’s verification help page, it’s currently only available for iOS devices in the US, Canada, Australia, New Zealand, and the UK.

Musk should have known that verified fake accounts would be a problem on his platform. Verification for anyone willing to pay for it ignores the reasons the current system was put in place and potentially undermines the trust in Twitter that account verification is supposed to provide. Brands whose ads Twitter needs to make money from will probably not like this solution either.

Debut trailer for action game with parkour and sword fighting Project: The Perceiver

PlayStation Store, new offer of the week: an entire series on sale on PS4 and PS5

NFS, High On Life, The Witcher 3: what is the most anticipated game of December?