God of War Ragnarok: presentation at the San Siro stadium unveiled, here is the video

As we had anticipated, last night during the pre-match Inter-Bologna there was a presentation dedicated to God of War Ragnarok, the action game from Santa Monica Studio. As Dazn season ticket holders discovered, a digital mosaic made with the support of the community that participated in the # FaceTheRagnarök project. 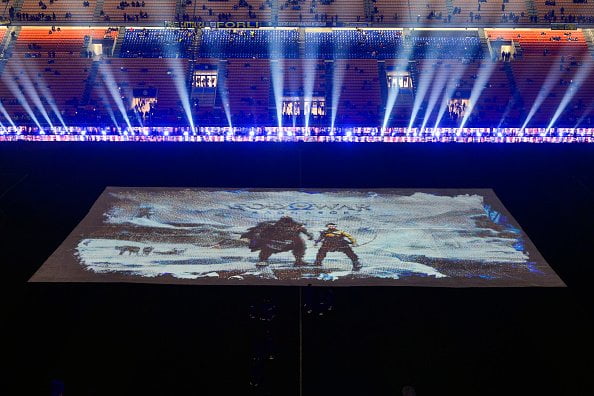 The presentation of God of War Ragnarok at San Siro

The Sony’s official statement is the following: “To celebrate the launch of God of War Ragnarök, available starting November 9, exclusively for PlayStation 5 (PS5) and PlayStation 4 (PS4), Sony Interactive Entertainment Italia, in collaboration with DAZN – streaming platform and sports entertainment – has created a special and innovative activation, projecting at the San Siro stadium, on the occasion of the Serie A TIM match between Inter and Bologna, a digital mosaic created with the precious support of the community. ”

“The business represents the culmination of # FaceTheRagnarök: a project that started on October 3, entirely dedicated to the Playstation community, in which the stories, experiences and uniqueness of all the players represent the beating heart of the story. ”

“Users, to take part in the initiative, shared a selfie, painting their face with the famous tattoo that characterizes one of the two characters of the game: Kratos. Participants were then asked to tell about themselves by choosing between some keywords that identified the distinctive traits of their personality. In just three weeks, the community responded enthusiastically, with over 2,000 shots collected and a strong sense of aggregation and sharing. ”

“The final act of # FaceTheRagnarök, materialized at the San Siro Stadium, theater of the spectacular projection that dominated the “pitch” during an Inter match. The Nerazzurri Club was chosen for its activity as a leader in innovation and always committed to offering its fans new forms of entertainment. ”

“Thanks to sophisticated video mapping technology, which allows you to create effects of great visual impact, the spectators first witnessed the “freezing” of the turf, which then gradually “crumbled” revealing a gigantic digital mosaic depicting Kratos and Atreus, the protagonists of the last chapter of the epic developed by Santa Monica Studio. The mosaic is not just a simple projection: the suggestive key art portraying “father and son” – if observed in detail – hides thousands of shots of the PlayStation community, which animate the composition with their own experiences and peculiarities. ”

“A unique and suggestive atmosphere that of San Siro, where we celebrated the return of Kratos and Atreus and the release of the new chapter of one of the most beloved sagas of the entire PlayStation universe!”

Finally, we leave you to our review of God of War Ragnarok.

Because of Musk's decision to verify accounts, Twitter is already flooded with fake accounts and misinformation

Ninja Gaiden and Dead or Alive towards the Reboot: Team Ninja intends to bring them back into vogue

Stellantis (Peugeot, Citroën, Fiat) places France at the heart of its production, except for one flagship model