A warm, early summer evening, floodlit, Wembley Stadium. 90,000 enthusiastic fans cheer the final of the FA Cup, arguably the most prestigious national cup competition in the world. It’s the 90th minute in the traditional duel between Liverpool and Manchester Stretford, after a thrilling match at eye level it’s 2-2, everyone has already come to terms with extra time. But then suddenly a stroke of genius from midfield director Tomeu Dominguez Ferreira, he hits a long ball on the left wing to Senegalese exceptional talent Seck Maiga. Egypt’s superstar Mando Shaalan was able to accept his cross perfectly at the far post and netted the much-celebrated 3:2. The final whistle, a crowd of people, a rain of confetti – Liverpool FC have won the cup for the 62nd time.

Hey wait a minute? Manchester Stretford? And who the hell are Ferreira, Maiga and Shaalan? Welcome to Anstoss, because as you are used to from the great classics of the series – parts 2 and 3 – you have to make do with alienated names in the new offshoot for the time being. But that’s not so bad, because football fans quickly recognize in the game that Manchester United, Thiago, Sadio Mané and Mohamed Salah are of course meant here. First drop of bitterness at this point: You can’t change too much at first, because an editor will only be delivered at the end of the Early Access phase, until then you’ll have to make do with the fantasy names for the most part. 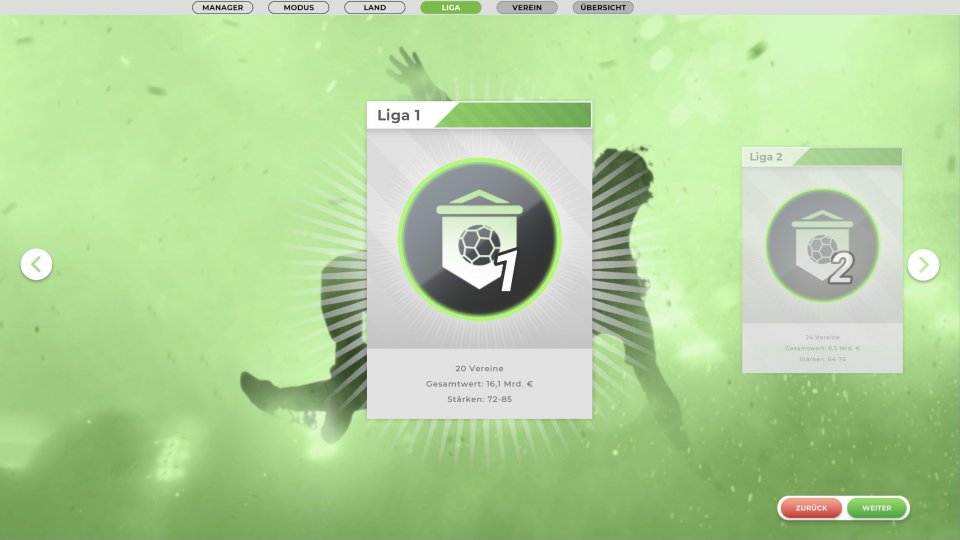 When choosing a league, you can choose from three divisions in each of Europe’s top 5 nations. Source: PC Games After all, one or the other fan site already has an EA fan patch up its sleeve, which at least brings the club names and coats of arms up to a realistic level. You also have to do without other things for the time being, such as friendlies, national teams or – and this is particularly bitter in my opinion – any European cups. A multiplayer mode is also not on board yet, but it is on the agenda.

Kickoff: The start of the game

What already works well, however, is the start of the game, which kick-off veterans feel right at home with. For example, the selection of leagues at the start of the game is not as extensive as, for example, in Sega’s Football Manager: you can choose from the top 5 nations in Europe and the first three leagues there. So if you want to start with Essen, you can do so in the same way as with Ipswich, Barça or Naples.

Alternatively, you can let the game draw you a random club or choose one of nine offers. So a fan of every style of play should get their money’s worth. You can’t just found your own club yet – but that’s also on the roadmap for future updates. 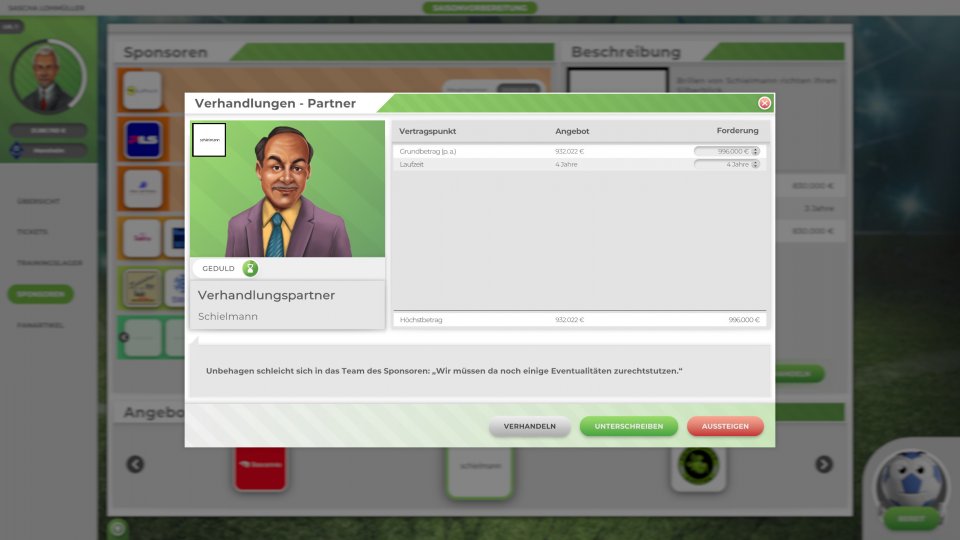 Just like in the old days: When negotiating with business partners, you can see from the face and the comments below how far you can still push it. Source: PC Games

Also very nice: At the start of the game you can decide whether you want to play with the strength system of 1 to 13 that is typical for Anstoss or whether you want to rely on a 100 system, as you are used to from the competition. Before you start the season, there are still employee negotiations, sponsor deals and the design of the jerseys.

The latter seems a bit too colorful and flashy for me, there are hardly any classic designs, but all the more crazy and ornate ones – if you like it.

However, the game doesn’t always seem to save what you set here, because a few moments later my Schalke players ran up in red pants instead of the blue ones that were set. The negotiations with the sponsors are more humorous. Just like before, an increasingly angry cartoon image of your negotiating partner symbolizes how far you can still push it – fans of the series get nostalgic right away.

return of classes next year, the imminent start of the third season and free weekends

The Rumble Fish 2: Fighters raise their fists in the trailer

Apple still has to pay a fine of 906.3 million rubles

God of War Ragnarok: the ‘demake’ for PS1 takes us back to the mid-90s