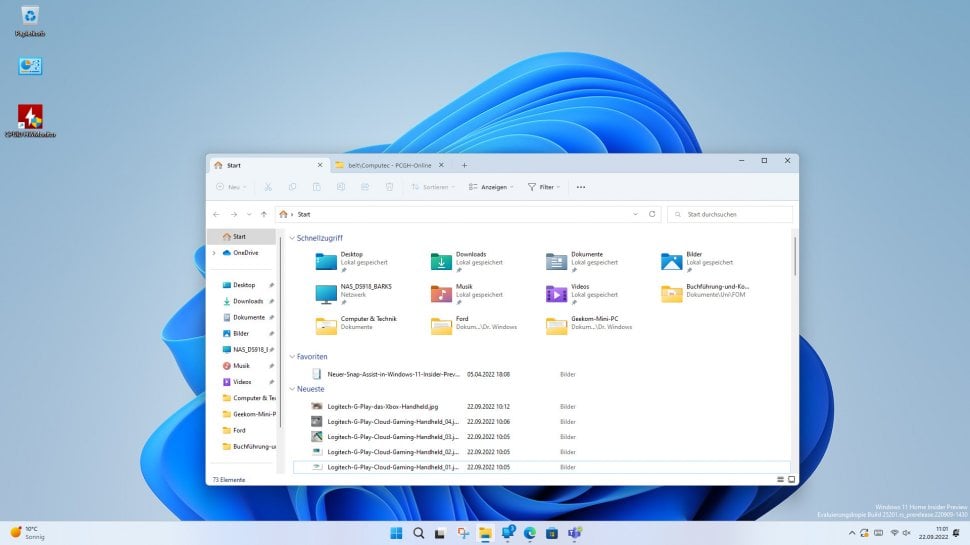 Microsoft has finished testing Tabs in File Explorer. With the free update KB5019980, the OS build is increased to 22621.819 and then brings the tabs in the file explorer. Folders can be opened in a new Explorer tab either by pressing the mouse wheel or by using the key combination Ctrl + T. Of course it is also possible to move files between different open tabs. Compared to tabs in the web browser, however, an option for grouping tabs is missing. In addition to tabs, the update also contains another innovation. Microsoft is distributing the update as part of the November patch day for Windows 11 2022 Update users. Alternatively, KB5019980 can also be downloaded and installed manually from the Microsoft Update Catalog.

New feature for the Windows 11 taskbar

From now on, you can right-click anywhere on the taskbar to open a context menu with the task manager. Previously, you had to right-click the Start button to do this. A new taskbar is included in Windows 11, in which users have to do without many features compared to previous Windows versions. With the goal of simplification, however, Microsoft has gone too far, as numerous forum entries by disgruntled users show. Microsoft has already announced that they will listen to this feedback and are bringing back several previous taskbar features with Windows 11 version 22H2.

Microsoft will make the comeback of taskbar functionality dependent on usage. Only features that are used by a majority of Windows 10 users and are not yet available in the successor will be added later. You will have to do without a flexible positioning of the taskbar at the edge of the screen, because only very few users have taken advantage of this option. Since Windows 7 from 2019 there has been a grouping of open windows of a program in a program icon, so far you could deactivate this grouping.

Collection of Explorer tabs and another new feature under Windows 11:

With the free update KB5019980, the OS build is increased to 22621.819 and then brings the tabs into the file explorer under Windows 11. Folders can be opened in a new explorer tab either by pressing the mouse wheel or by using the key combination Ctrl + T .In addition to tabs, the update contains another innovation. From now on, you can right-click anywhere on the taskbar to open a context menu with the task manager.

"Ukrainians should remember such bright personalities." A book about Blokhin has been published

Windows 11 2022 Moment 1: here are the big new features of the October update