The Pokémon Company Group has announced that Ash Ketchum, the protagonist of the Pokémon animated series, has become the top trainer in the Pokémon world by winning the Eight Masters Tournament of the Coronation World Championships. Ash celebrates this win in the latest episode of Pokémon Ultimate Journeys: The Series, which premiered today in Japan and will soon be broadcast worldwide. 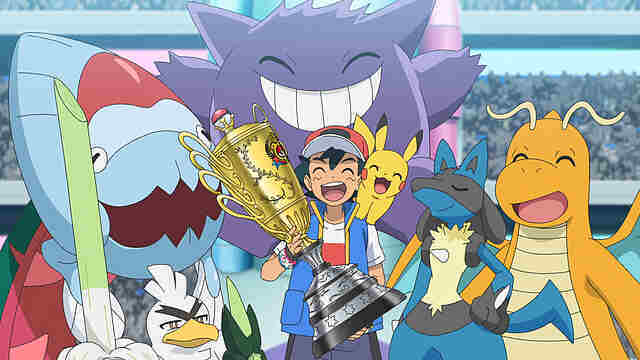 In the latest season of the Pokémon animated series, Ash and his Pikachu have put their training to the test – with the result that Ash has officially achieved his goal of becoming the new monarch of the Coronation World Championships. This historic victory is the culmination of Ash’s adventures in the Pokémon world, from countless battles to grand challenges spanning 25 years.

Since beginning their journey in the Kanto region, Ash and his Pikachu have faced off against numerous rivals, often missing out on a tournament win. But the two of them fought their way up until Ash finally secured the title of first-ever Champion of the Alola Pokémon League at Manalo Stadium in the Alola region, showing just how far he’d come as a Pokémon Trainer.

Ash’s World Champion title is also a major pop culture milestone and cause for celebration for Pokémon fans around the world, who have followed his journey closely over the past 25 years.

“The determination and perseverance Ash Ketchum has shown over the course of 25 seasons to achieve his goal of becoming the best Pokémon trainer alive embodies the best of what it means to be a trainer. We can’t wait to celebrate this moment with Pokémon fans as the latest season of Pokémon Ultimate Journeys The Series and this monumental episode air around the world next year. This is a season no fan should miss!”

Fans can catch new episodes of Pokémon Ultimate Journeys: The Series every week on Sundays at 10:30 a.m.

"Kherson is Ukraine!" - "Ukrposhta" prepared a new stamp for the de-occupation of the city - Aroged

The Legend of Zelda: Tears of the Kingdom, preordine disponibile ora su Amazon