A good keyboard can provide more comfort and precision in everyday life as well as in gaming. There are several factors that weigh differently depending on the user – for example the typing feel, the volume when typing, the size of the keyboard, the design, backlit keys, programmable macro keys and ultimately the price. Because not everyone is willing to invest a lot of money in a keyboard. Depending on the requirements or whether you are sensitive enough to notice differences when typing, many leave it at a keyboard for 30 to 40 euros or even less. We will give you some information and food for thought about the important features of keyboards and, in particular, go into more detail about the special properties of the keys on mechanical keyboards. We also garnish the end of our special with a large market overview.

Almost every keyboard looks the same in principle: Several rows with individual keys placed parallel to each other form the keyboard field. But of course there are differences. Some keyboards have additional keys, on others the F-keys provided as standard are placed at a clear distance from the number keys, on some they are integrated directly above them or even via the FN key, as in many laptops, in the number keys.

The number field on the right (also NumPad) can be present with a smaller or larger distance – or it can be missing completely. Especially in the gaming sector, there are so-called tenkeyless models for players who don’t have much space. Without a tenkey, i.e. without a number field, a keyboard can logically be narrower.

For ergonomics, many keyboards also have a palm rest. This is removable because not everyone needs this help or even finds it annoying. However, the general ergonomics are very uniform – there are only very few keyboards designed for the office sector that deviate from the standard scheme.

As a gamer, you should only think about whether you need additional keys and if so: whether they are easily accessible for the keyboard models you are considering for your playing style. 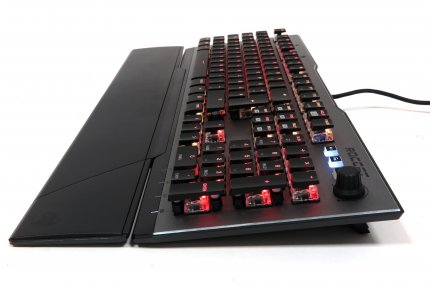 On some models, the buttons with the switches are exposed, which can be visually appealing, but above all makes dusting easier. Here in the picture a model of the Vulcan series by Roccat. Source: PC Games Hardware Mechanical keyboards have dominated the gamer scene for a number of years, and anyone who types or plays a lot can certainly confirm that the feeling is different than with the much cheaper so-called rubber dome keyboards.

Not everyone notices the differences or likes them, also because they have the image of being quite loud, which is only partially true with modern models. Even those who appreciate the benefits might not find it big enough to buy anything more than a standard $30 keyboard.

But the success speaks for itself. By the way, mechanical keyboards are already many decades old, but were initially replaced by rubber dome models. Because the latter are very cheap to produce: under the keys is a rubber mat with a dome under each key.

When you press the button, you depress the dome, which activates a microswitch under the mat on the circuit board – the button is then considered pressed. With a mechanical key, on the other hand, there is a construction with a metal spring under each individual key, which is significantly more expensive to produce.

On the other hand, the key can be given a specific typing feel, and these keys are said to have less wear and tear than rubber dome models. Because of the advantages, mechanical keyboards, which had almost disappeared from the market, are now so popular that, thanks to the worthwhile mass production, there is a huge selection of models that are no longer as expensive as a few years ago, at least when you start out. On the next two pages, we explain exactly what the buttons on mechanical keyboards are all about.

Thing gets unofficial playable teaser - A Trip to Outpost 31

Hogwarts Legacy: A short showcase showing the potential of the game