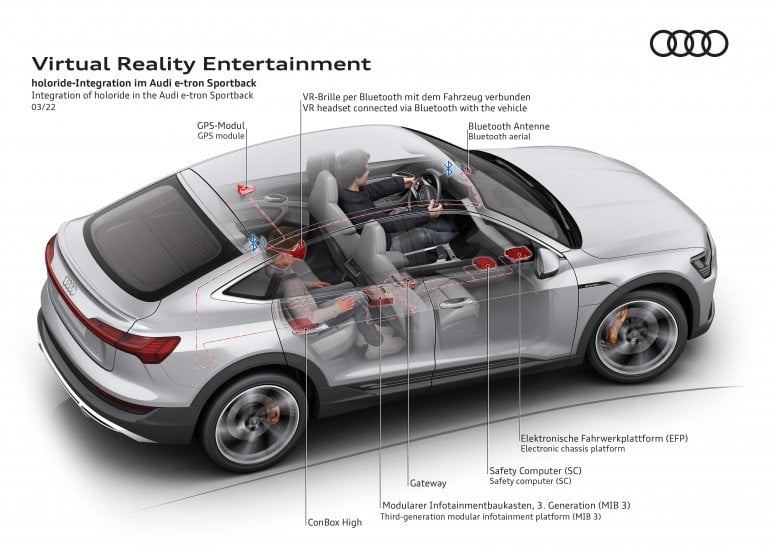 In 2019, the start-up Holoride showed what an integration of VR headsets in cars could look like. The company now belongs to Audi and has made Holoride ready for series production. Anyone who buys a new Audi can buy the Holoride Pioneers Pack in the online shop for a limited time for 699 euros. The scope of delivery includes the VR headset HTC Vive Flow and the controller 8Bit Do Pro 2. In conjunction with Holoride, VR content can be experienced directly in the car.

With Holoride, certified VR headsets can access real vehicle data, so that the phenomenon of motion sickness should not occur as far as possible. The HTC Vive Flow connects to the built-in MIB-3-based navigation system via Bluetooth and WLAN and can access the acceleration data, among other things. One of the first software products is Cloudbreakers: Leaving Heaven. This is a game by the developers of Among Us VR. Players control the scavenger robot Skyjack through a sky of Stratus, chasing down AI sentries while driving in reality to their actual travel destination. For example, if the real Audi corners to the right, the spaceship will also move to the right. In the future there will be more video games, as well as an option to mirror the smartphone screen on a virtual screen with a 180-inch display diagonal. To ensure traffic safety, only passengers can use the VR glasses while driving, but not the driver. There is also the Safety Strap, which is connected to the safety belt and is used to quickly cut the connection. Back in 2019, Audi demonstrated how VR glasses work for rear seat passengers in the car with the VR game Marvel Avengers: Rocket’s Rescue Run. At Amazon, the necessary VR glasses HTC Vive Flow cost around 475 euros.

According to Holoride, Schell Games, Avore Immersive Games, Tripp, Magnopus, Preloaded, Spice VR, Fresh FX, Future House Studios and Mediasquad are working on the Holoride platform for in-car VR content. In addition to the Holoride package including the VR headset, customers also need a subscription to the Holoride platform. The subscription with access to VR content is included for one year after purchasing the Pioneers Pack, after which it will be just under 20 euros per month or 14.99 euros per month if you opt for a 1-year subscription. Holoride can currently only be used with certain Audi models, since the MIB 3 infotainment system including the new MJ2023 software cluster must be installed and the Audi Connect Navigation & Infotainment service must be subscribed to. The Remote Park Assist Plus must not be selected, otherwise Holoride will not work. Since the start of production in June 2022, the Audi A4, A5, A6, A7, A8, Q5, Q7, Q8, Audi Q8 e-tron, Q8 e-tron Sportback and e-tron GT have had a corresponding infotainment system. In the future, Holoride should also be available from other car manufacturers.

Also worth reading: Future cars with “subscription hell”: Seat heating at BMW is just the beginning

Collection of Holoride at Audi:

Anyone driving a new Audi can now immerse themselves in virtual games. The car manufacturer now offers support for Holoride. The Pioneers Pack, which contains the necessary VR glasses HTC Vive Flow, as well as a controller, a safety strap and access to the platform, is available for 699 euros. With Holoride you can certified VR headsets access real vehicle data so that the phenomenon of motion sickness should not occur if possible. The first game available is Cloudbreakers: Leaving Heaven from the creators of Amoung Us VR. Players control a spaceship and chase AI guards to their destination. In order to be able to use Holoride, a subscription fee of just under 20 euros per month is due one year after purchase. Holoride can currently only be used in conjunction with the infotainment system MIB 3 Use Evo. In the future, Holoride should also be available from other car manufacturers.

Price-performance-oriented Galaxy M54 is in the performance test!

Release trailer for the remaster of the strategic role-playing game Tactics Ogre: Reborn

Comeback possible again? Zack Snyder and the Return to the DC Movie Universe

FTX: Who is Samuel Bankman-Fried? The culprit behind the recent fall in cryptos