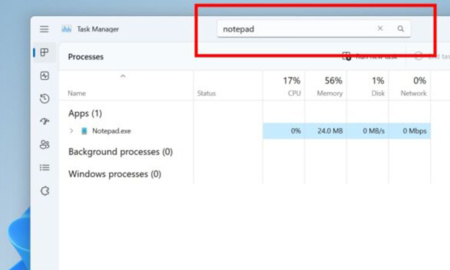 Microsoft continues to work on improvements to the Task Manager in Windows 11. Some of them appeared in preview this week and are available to Windows Insiders in the beta channel.

The most significant of these changes is the new search bar for running processes, making it easier to find specific processes among dozens of others.

We are also testing support for Task Manager dark mode, which can be enabled regardless of the Windows theme setting. This also applies to pop-ups within it. And the toggle for efficiency mode now includes a “Don’t ask again” checkbox if you regularly switch individual processes to efficiency mode and don’t want to be asked for confirmation each time.

It is not known which of these changes will make it to the stable build of Windows 11 and when. Microsoft often uses the Windows Insider channels to test features – some of which never reach users. However, usually new features in the beta channel mean they will eventually be released in the next few months.

In the meantime, the experimental Dev channel has moved on to a brand new major build number, Windows 11 23H2, which can be expected to release next year.

Oppo Find N2: despite its fold, it would weigh as much as an iPhone 14 Pro Max

Took advantage of the chance. Fritz in the semi-finals of the ATP Finals