The highly anticipated role-playing action Hogwarts Legacy, which takes place in the universe of the books “Harry Potter” today got the first video showing real gameplay.

During the broadcast, which took place on November 11, a fragment of the gameplay was shown with a duration (how many minutes are there). The first thing the developers decided to talk about (and show) was the character editor. You can’t call it detailed, but it looks good. And yes, you can reward your character with iconic round glasses! Also, at the stage of character creation, a choice of difficulty will be available, among which there is a “story mod”.

A first look at the live gameplay directly indicates that Hogwarts Legacy will place a lot of emphasis on exploring locations and interacting with various objects using spells. Within the walls of Hogwarts there will be many hidden secrets that can help with the passage. The interiors themselves look elaborate, and, for sure, will delight fans of the universe with their details.

One of the key items for your character will be a spell book. It also reflects your leveling, and serves as a place to store spells and something like a glossary. The pages for her will become one of the collectibles. And yes, there will be a system of competition between faculties in the game. And the number of points of each faculty is presented in the form of something like an hourglass. 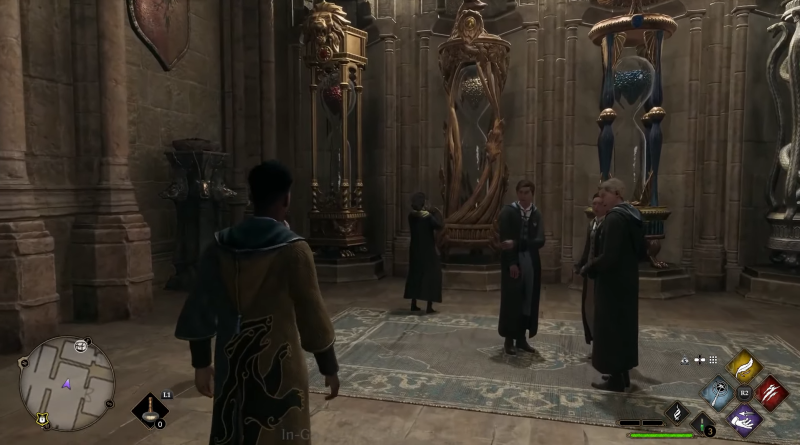 Hogwarts was shown not only detailed, but also far from empty. A large number of characters can be spoken to, and many of them will become sources of side quests of varying degrees of importance. The dialogue system shown is quite linear, but at least without “yes, no, sarcasm”.

The combat system looks quite interesting and complex, and the battles are dynamic. Players will have a “sixth sense” that will alert them to an upcoming attack, allowing them to dodge or parry a targeted spell. The color of the shield will indicate what type of spells the enemy is preparing for (and which ones can be used to successfully break through the defense).

Despite the fact that not many locations were shown during the broadcast, and all of them were located inside the castle and the rooms of the faculty, according to the hosts, the lands surrounding Hogwarts will be recreated and playable. During the stream, there was even a reference to the expression that has become a meme, “See the mountain – you can walk to it”, which sounded in the context of a demonstration of a distant lonely tower.

Share your impressions of what you have seen in the comments! Players will be able to immerse themselves in the atmosphere of the Hogwarts School of Witchcraft and Wizardry on February 10, 2023.

Samsung plans to invest more in QD-OLED, because... Apple!

November 11 will go down in history. Dynamo - about the liberation of Kherson

Halo Infinite: These are the new playlists included in the Winter Update