There it is, the autumn of games! Accordingly, the current issue is also dominated by test topics. Above all, our cover story A Plague Tale: Requiem. The predecessor Innocence was a real surprise hit in 2019, in the test we clarify whether Requiem again offers sophisticated stealth action, an oppressive atmosphere and a great story. The latter definitely applies to the Uncharted series, which is finally making its PC debut with the Legacy of Thieves Collection. Unfortunately, the first three parts are not on board, only the fourth and offshoot The Lost Legacy, but as a PC player you will still be dazzlingly entertained here.

Apart from that, we are also testing the Call of Duty: Modern Warfare 2 solo campaign, which really entertained us. Unfortunately, the servers were not yet online for a final verdict on the multiplayer part, but you can read more about this on the website or in the next issue. Also in the test: the superhero adventure Gotham Knights, the strategy heavyweight Victoria 3 or the adventure offshoot New Tales from the Borderlands.

In addition, shortly after Halloween, there is a lot of horror in the current issue. In the test area, for example, we are disgusted by the Scorn inspired by HR Giger, in the preview area we have a pack of three with fresh impressions. So we were able to take a first look at the completely renewed Resident Evil 4 remake, puzzle our way through the horror house of The Dark Pictures Anthology: The Devil in Me one last time before the release and also the sci-fi horror of The Callisto Protocol again experience ahead of release in December. For buyers of the extended edition there is not only the WiSim full version Rise of Industry, but also the third and last part of our large PDF booklet archive on DVD. 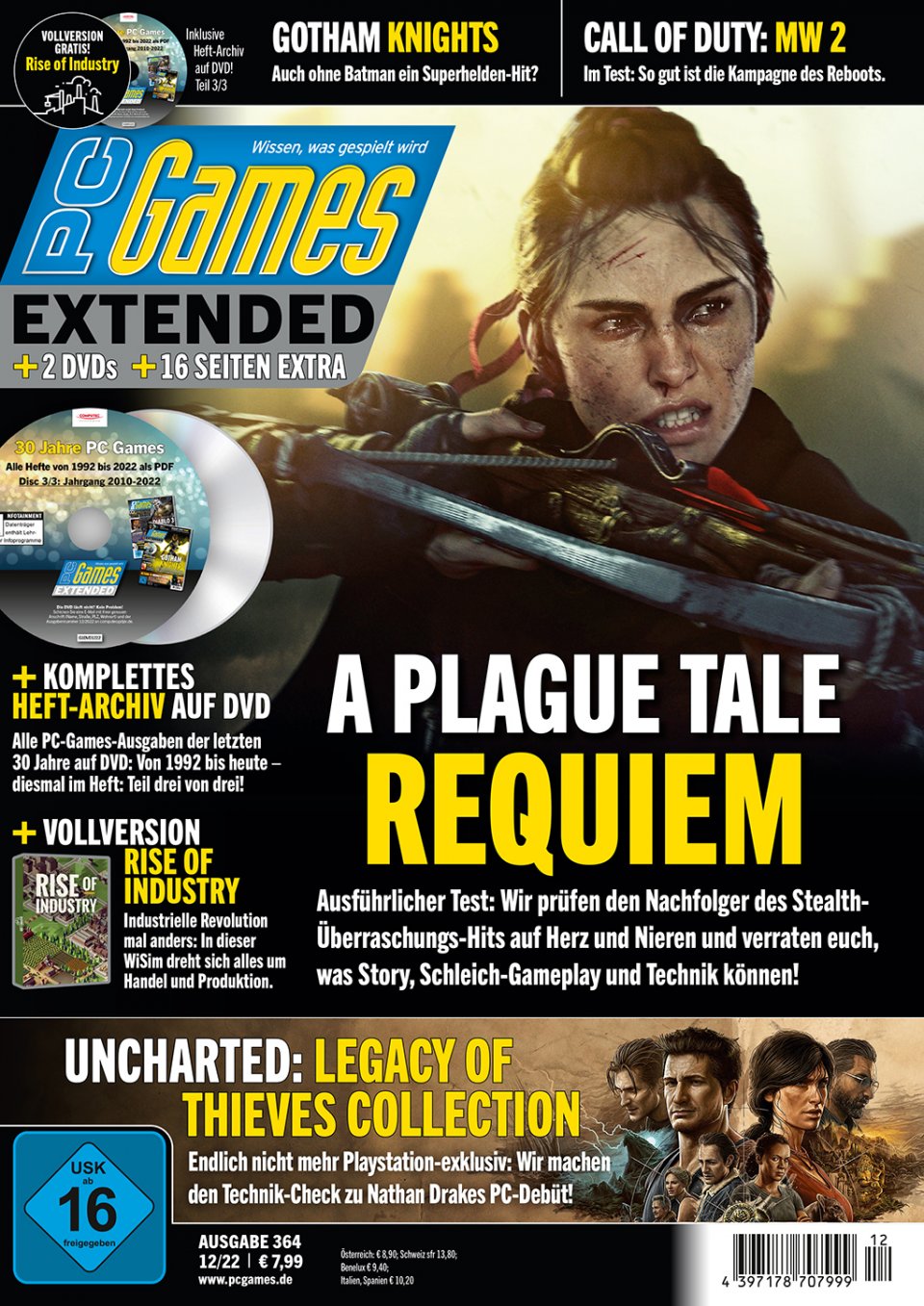 The entire PC Games team wishes you a lot of fun with this edition!

You can get the new PC Games 12/22 from November 16th at your newsagent – either as a magazine edition for 5.99 euros or as a particularly lavishly equipped extended version with 16 extra pages, two bulging DVDs and digital full version.

If you don’t want to wait that long: go to the PC games online shop – simply order the new issue to your home or subscribe now and collect a valuable bonus!

Of course, the new PC games are also available in digital form! From now on, your favorite magazine will accompany you everywhere – whether on a tablet, smartphone, Kindle Fire or in the browser.

John Wick 4: Tons of action in the new trailer, Star Wars The Mandalorian: Season 3 teaser trailer with spectacular scenes! and much more – the most popular videos of the day

You can find the ten most watched videos of the day in this article. These include exclusive gameplay videos, trailers and more. What you missed today: Important news and articles on PCGames.de

The most exciting news, articles and tests of the current day on PC Games: Every day we summarize the most important articles for you.

Available now on epaper.pcgames.de for all common browsers, in the iTunes store, on Amazon for Kindle Fire and in the Google Play store. Register once – read on all platforms! Here you will find a complete overview of all digital PC game variants including a comprehensive explanation of what to consider when registering for these services!

Smash Bros World Tour canceled: the dispute between Nintendo and the organizers continues

Save up to 90 percent: Which lamps you should replace immediately

Black Friday: promotion on this fixed gaming PC which was already a basic deal with its RTX 3060

Nintendo Switch Discounts: 3 games for less than € 5 that you can't leave on the shelf

Insider: Season 3 in Battlefield 2042 will start much earlier than in Halo Infinite