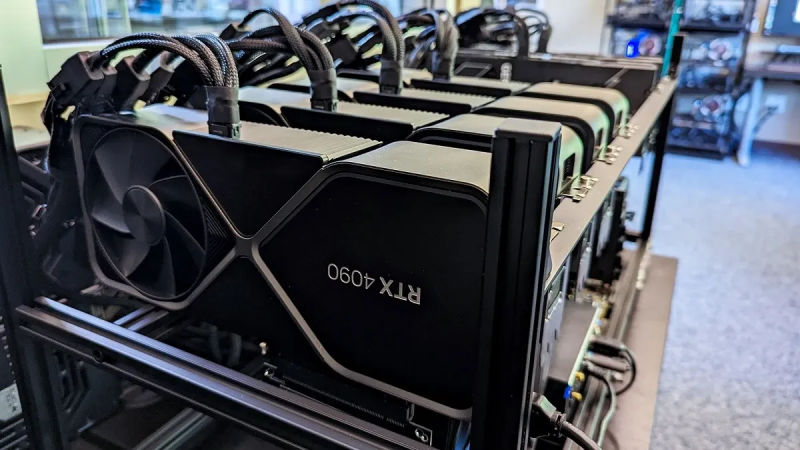 Quite interesting news appeared on the network that enthusiasts assembled a stand of seven NVIDIA GeForce RTX 4090 video cards, which consumed a total of 3000 watts of power. It’s like a welding machine, only video cards.

And although the experiment turned out to be quite banal, users still managed to get some interesting results. For example, enthusiasts in benchmarks received scores that are seven times higher than that of a single NVIDIA GeForce RTX 4090 video card. This, of course, is logical – seven video cards are seven times more powerful than one.

Power consumption also turned out to be more or less understandable, since each of the video cards consumed as much as the manufacturer claimed at peak load. But there is also unusual data that you may like.

Experts note that such an installation could bring about $ 90 per day if video cards were launched six months ago, when mining was still at its peak. Accordingly, even with the peak cost of NVIDIA GeForce RTX 4090 at $ 2,000 for one video card, such an installation would pay for itself in just 150 days. These are, of course, extremely striking figures, since after the payback, the installation would bring in a stable 90 dollars a day – for this you would not even have to do anything.

Another thing is that now even one NVIDIA GeForce RTX 4090 is almost impossible to find in the public domain, let alone seven video cards, plus electricity costs would be just cosmic at 3000 watts.

God of War quiz: Are you sure you know the episodes before God of War Ragnarok?

Overwatch 2 and the Call of Duty games are finally changing this controversial function, making life easier for players but…