A role-playing adventure like a book! Our last D&D session had everything it takes: funny scenes and lots of laughter, panic, rants, flirts and deep conversations. But how could it be otherwise when the heroes lure sirens on a dream beach to elicit clues from them?

Of sirens and seahorses

After numerous adventures in the jungle, Nadia, Castiel and Arianna finally went to the sea – high time since they are on a tropical island! They set out from the temple of the nature goddess Mielikki and traveled to the sleepy Tortollan village of Sunin. There’s a crescent-shaped beach near there called Moon Bay.

They found that it is possible to attract sirens to this beach at dusk with music. Since sirens and harpies are naturally hostile species, it was reasonable to assume that they would find out something here that would help them in the fight against the harpies. Too bad there are rumors that sirens like to eat men. 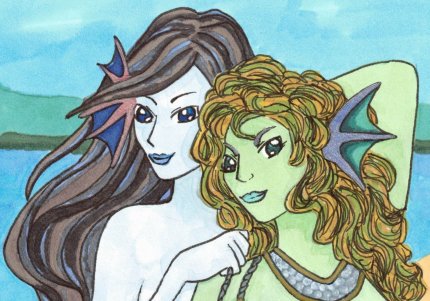 Sirens are known for their unparalleled beauty and singing. And for the fact that they like to eat men. What’s with all the rumours? Source: Buffed So Arianna played a jaunty tune on her violin at the back of the beach while Castiel once again waded into the water in bait function. And indeed: three sirens appeared and swarmed around him! They enchanted the angel with their singing, their beauty and a little bit of magic. So Castiel was more than willing to follow them into the depths for some water fun.

Nadia, who was waiting nearby to watch her bodyguard this time, freaked out and tried everything she could to get him to stay. In the end the situation escalated completely and the sirens disappeared again disappointed. For the heroes that meant no new information and no siren cuddles for Castiel. So they lured the mermaids again, apologized, and this time had a sensible, constructive conversation with them. In the end, they not only received a map of Harpy Lair drawn in the sand, but also the ability to breathe underwater for ten days.

So time to investigate the sunken ship Calypso off the small neighboring island of Ko Pelw Phi! But how should they get there? Ultimately, the three decided to take a hippocampal riding course and swim there on seahorse backs, as hiring a sailing ship would have beaten their meager group budget. 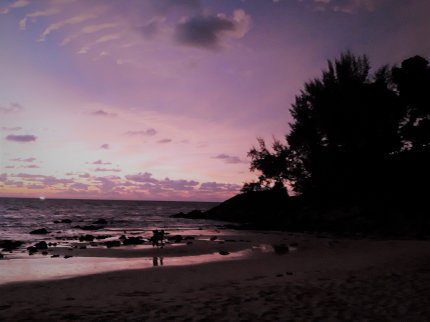 Holiday feeling in the moon bay. What could be nicer than a day of swimming at the beach and a siren date at dusk? Source: Buffed Usually it is the anxious Nadia who needs to be protected by Castiel. This time it was exactly the opposite. As Castiel let the pretty sirens lead her into the sea, Nadia saw red. She tried to pull him back, started an argument with the mermaids and cast command on Castiel to make him fly away. Anything to keep him from a wet tête-à-tête at the bottom of the sea.

Castiel, who had long been under the sirens’ insinuation magic, was furious again because Nadia screwed up the tour for him. When the sirens finally got fed up with all the fuss and disappeared under the water again, I, as the game master, faced a problem: what should I do now? I could slip players a map of Harpy Lair elsewhere, but Sirens would be the only way to get underwater breathing in the near future – and that, in turn, is urgently needed to be able to explore a sunken ship on level two!

I decided to give the two brawlers a tip with Arianna: sing a few more nice songs and the sirens might come back and give you a second chance. We then heard Castiel perform a karaoke version of “Down Under The Sea” from Arielle and Nadia a pirate song about treasure and rum. And those funny singing numbers were more than worth all the hassle.

travel by the water

There are several ways to travel from Ko Rillan to the neighboring islands. Small and large sailing ships (with crew) can be rented in the port of Kalarin. There are inexpensive rowing boats for nearby destinations, and a ferry runs back and forth between Kalarin and Sewanna every two days. Pirate crews are willing to take landlubbers on their ships in exchange for trade offers. And then there are the fast hippocamps. Compare these animals to horse-sized, epic seahorses.

So it’s up to the players and their characters to decide what kind of locomotion they prefer. While hippocampal riding can be learned in a one-day course, steering a sailing ship requires complex skills such as handling water vehicles.

Nadia and Castiel chose hippocampal riding and did their seahorse badge in a day course. Despite the badge, riding a tamed hippocamp still requires dice checks (Acrobatics and Handling Animals). Hippocamps are fast and cheap, but long journeys on the back of such an animal entail completely different dangers and exertions than the comfortable journey on a ship’s deck.

In battles and role-playing within the adventuring party, a GM character like Arianna is great. I can converse with the players, whisper hints to them occasionally and can officially make sarcastic comments. But as soon as it comes to intensive role-playing with the NPCs in a world, I find it difficult to integrate game master characters.

I’m one of those game masters who don’t like to have dialogues with themselves. Some do, but I’m uncomfortable with it. That’s why Arianna always stays in the background in such situations, although she is actually a very expressive and extroverted character. At this point I would be interested: What do you think? Do you completely avoid game master characters or do you have special techniques to be able to integrate them into the role-playing game without it feeling weird?

Balenciaga Bags are made from the most expensive trash bags in the world.