Upgrading or buying a new system can cost a fortune – if you need a new graphics card. Recommended AMD motherboards, which we focus on in this article, have also increased significantly in price, but are still cheaper. At the same time, we maintain an Intel mainboard purchase advice with LGA 1700 purchase tips; Both articles are regularly updated based on our extensive comparison tests from the PCGH booklets. To order the magazine in the PCGH shop.

At this point we also go into price developments, new rumors and future expectations of the respective platform. You can find a cross-generational overview of the latter in our platform overview.

Update, November 2022: Following the Socket AM5 launch as well as our first X670 market overview, the entire front half of the article has been rebuilt.

AMD processors and mainboards in general

In 2017, AMD combined the previously separate entry-level and mainstream divisions in socket AM4, which also served the high-end and later even the enthusiast sector. In the meantime, it has been replaced in the last two functions by the AM5, which will gradually take over the remaining market areas. In the meantime, or at the same time, there were and are other platforms at steep prices, some of which AMD also includes or included in the desktop range. Shortly after the AM4 launch, the TR4 was launched with three times as many PCI-E lanes and twice as many memory channels for enthusiasts, whereby gamers often found more trouble than benefit from the technology. At the latest after the associated Threadripper processors in the second generation not only offered twice, but four times as many cores as the AM4 CPUs of the time, workstation users also belonged to the target group. 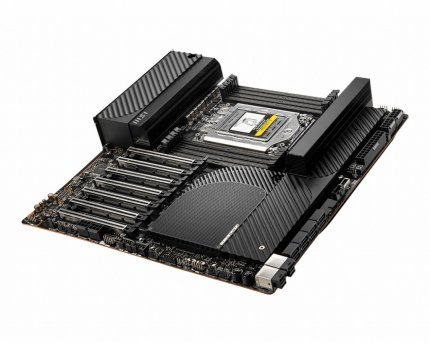 Asus, Gigabyte and MSI also offer the WRX8 socket with desktop-like styling, but price tags around 1,000 euros plus 5,500 euros for a processor, real E-ATX format, seven ×16 slots and eight DDR4 channels don’t sound good for gaming PC. Source: MSI Although later AM4 and even more so AM5 processors are often more powerful, always in games and significantly so that they have successfully replaced the TR4, AMD has not formally retired the increasingly outdated platform for a long time. Instead, Threadripper 3000 appeared in 2019 in the “non-successor” TRX4: The new socket was intended to “complement” the TR4 as a “high-end desktop/workstation” platform and, despite the similar name, was incompatible with the TR4, while SP3 Epycs and AM4 Ryzens continued their existing platforms with identical Zen 2 technology. After only a single CPU generation, AMD repeated this game and stopped supplying the TRX4 with new CPUs, but formally left the socket in the program. The again SP3-based, again incompatible in all directions WRX8 and its Threadripper Pro processors were once again introduced as a “workstation” supplement, i.e. as an addition to the “workstation platform” TR4 and its “workstation supplement” TRX4 and the AM4 top models sufficient in practice for some workstation tasks.

AMD only officially ended this charade two years later: Currently there is only the WRX8 between the AM? desktop and the SP? server sockets, which, however, will have a successor (or an addition?) in the medium term to match the AM4-AM5 change Zen 4 base should receive. The same applies to it as to the TRX4 and, to a limited extent, also to TR4 offers: From the player’s point of view, these expensive platforms are clearly oversized; the fact that AMD sometimes marketed them as “high-end desktops” was never justified. For gamers, Threadripper and Threadripper Pro processors offer such small advantages over Ryzens at the same technology level that a next-gen mainstream model is the faster choice (e.g. Ryzen 7000 vs. Threadripper Pro 5000).

Game Awards 2022, tonight the announcement of the nominations: follow it live with Everyeye!

Squad Emulator in Genshin Impact: how to use and build squads

This 18/20 open-world game will be leaving PlayStation Plus soon. Don’t delay if you want to finish it on PS4 or PS5!