NVIDIA still doesn’t know why RTX 4090 16-pin power connectors are melting, although there are a few unofficial theories 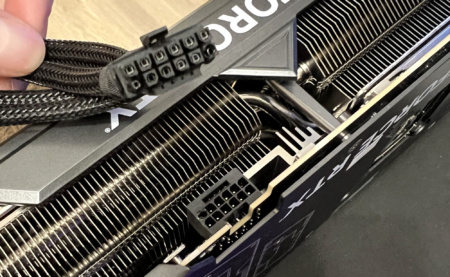 NVIDIA has commented on an issue regarding the melting of the 16-pin power adapter on GeForce RTX 4090 graphics cards. The company said that it is still investigating the causes of such incidents with power adapters, but does not yet have any new details.

It’s been a few weeks since the first reports of melting 16-pin power connectors in RTX 4090 graphics cards and failure of devices appeared. Since then, the number of such reports has increased, but NVIDIA still does not have new information about the problem and possible solutions.

“We continue to investigate the reports, however, we do not yet have details to share. NVIDIA and our partners are committed to supporting our customers and providing them with an expedited RMA (Return Merchandise Authorization) process – returning defective or defective products to the manufacturer for repair, exchange or refund, ”the company said.

And while NVIDIA is silent, various theories and assumptions appear on the network that try to explain what is happening. One theory suggests that the 16-pin power adapter is primarily to blame. According to Igor’s Lab, the bundled power adapter is not well designed and may fail if the wires are bent too much.

Gamers Nexus makes a different argument. Some 16-pin power adapters are reported to use 150V cables instead of the 300V cables required by the specification. 300V and failed to reproduce any of the same failures that Igor’s Lab found in their testing. Thus, we came to the conclusion that only power adapters with 150 V cables are to blame.

Another version was put forward by John Gerow from Corsair (Jonny Guru). It assumes that some users have not fully inserted the connector into the connector. It is noted that the 16-pin plug can be difficult to insert into the 16-pin power connector on GeForce RTX 4090 graphics cards. Not making enough contact with the gaps can cause the power adapter to melt.

Igor’s Lab considered another version. As it turned out, the official 600W NVIDIA cable that comes with all GeForce RTX 4090 video cards is produced by two Taiwanese companies: Astron and NTK. According to Igor’s Lab, the NTK cable has a better locking system and uses a single spring pin, as opposed to Astron’s two spring pin design. However, Astron cables allegedly have less durability and higher resistance than NTK cables, which can be measured with appropriate equipment after 10 connection cycles. This version would require testing on a larger scale before drawing any conclusions.

Ultimately, there is no definitive or official answer as to why 16-pin power adapters melt. By the way, some 16-pin cables also melt. So owners of GeForce RTX 4090 graphics cards should be careful to use them under load, make sure that the cables are not bent, and the plug is fully inserted into the connector.

LEGO Minecraft: when the two most famous construction games meet, it breaks bricks!

God of War Ragnarok and too many player suggestions, David Jaffe has his say