In the recently released God of War: Ragnarök, players will meet the Allfather Odin for the first time. His voice actor, Emmy-winning Richard Schiff, only accepted the role because his son felt he “should just say yes.” 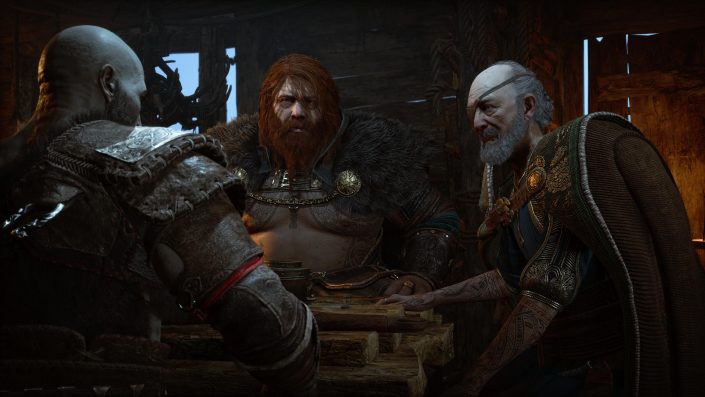 In „God of War“ from 2018 he is mentioned several times, in the recently released sequel the players finally get to see him for themselves: Odin plays a bigger role in “God of War: Ragnarök”. The developers had Emmy-winning Richard Schiff in mind for the role, but didn’t think the famous actor would agree.

In an interview, God of War: Ragnarök director Eric Williams spoke about how the team managed to land Schiff in the role. It seems the studio has Schiff’s son to thank for that.

As Eric Williams explained in the interview, Schiff’s son is a big fan of the God of War series. He pushed his famous father into the role of Odin, even though he had no idea what God of War was all about. However, his son helped Richard Schiff understand the games.

“He didn’t know what it was when we called him. And then his son asks: What do they want from you? And he says, ‘Oh, they want me to be in God of War,'” Williams said in the interview. “The son said: Do it, Dad! His son was a big fan and he analyzed God of War 2018. He wrote down all of these bullet points on two pages so his father would know how to talk to us about anything. Who does this? He is Richard Schiff. He could have just shown up!”

In another interview, Williams spoke about the team’s reactions to hearing that Richard Schiff, who won an Emmy for his role in the drama series The West Wing in 2000, is taking on the role of Odin. “They said: This guy is going to play Odin! You guys are kidding me!” Williams said. Some people also said: I don’t really know. And then he opened his mouth and everyone said: Dude, that’s going to be awesome.”

Elon Musk received detailed forecasts on the launch of Twitter Blue and its negative consequences, but ... ignored the recommendations of employees - Aroged

Fortnite x Rocket League: Octane is coming, find out where to find it and how to use it!

Nintendo Switch games on sale for Black Friday Sales on eShop: here is the date

The God of War Ragnarok GIFs are here, and they’re as hilarious as ever