Can the performances and new features on offer make us forget this price? This is what we will see with this test.

Here is the GeForce RTX 4080 (16GB) spec sheet. It should be noted that Nvidia has canceled the less powerful 12 GB version originally planned.

Comparing to the GeForce RTX 3080, it can be noted that the number of CUDA cores has increased by 11% and the switch from Samsung 8nm manufacturing to TSMC 4N has allowed Nvidia to significantly increase the frequencies. We thus have a boost frequency of 2.5 GHz against 1.7 GHz for the RTX 3080. The TGP remains similar to the previous generation: 320W.

Our test copy was lent to us by Nvidia.

We are not going to dwell on the design of this GeForce RTX 4080 Founder Edition. Simply, it should be noted that the cooling chosen by Nvidia makes it as imposing as the RTX 3090, that is to say much larger than the RTX 3080 was. We are talking here about a graphics card that requires three PCI height slots for its heatsink. 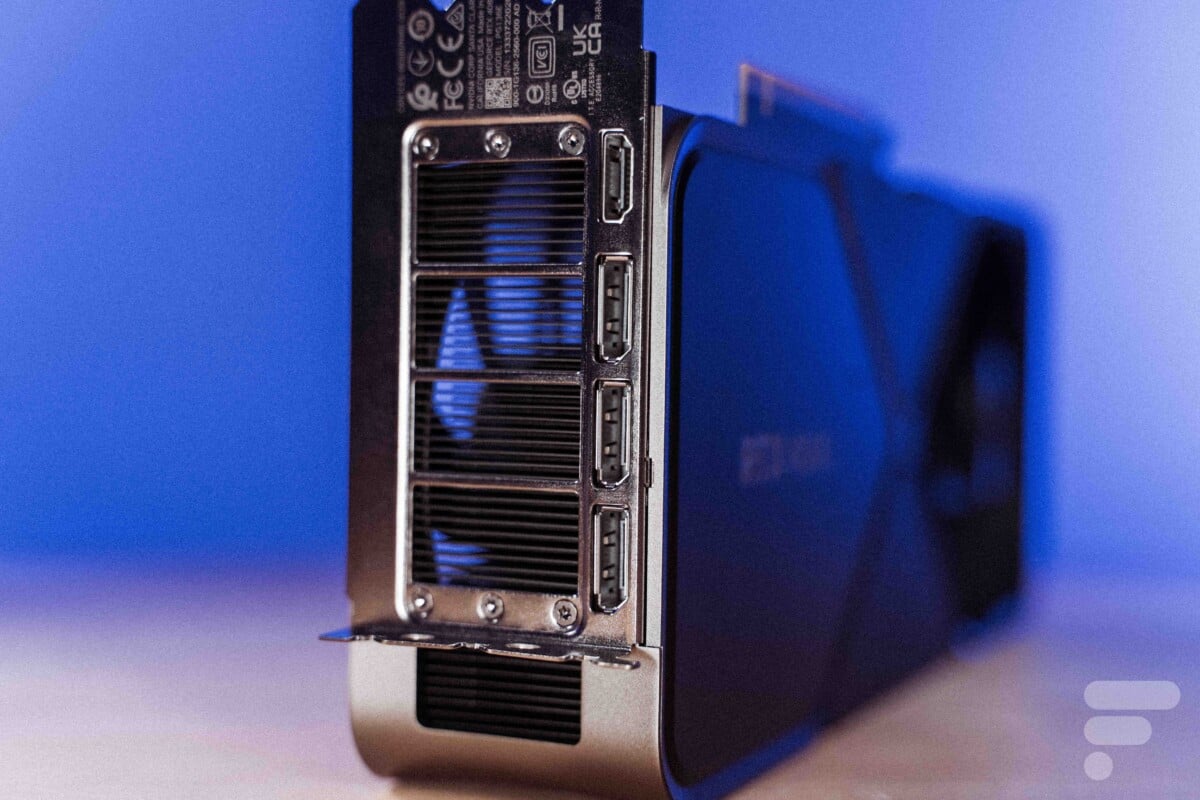 On the connector side, Nvidia offers three DisplayPort 1.4a and an HDMI 2.1. The brand was tackled on this subject by AMD which manages DisplayPort 2.1 on its Radeon RX 7000. You will therefore be “limited” to 4K at 120 Hz with this graphics card, or 8K at 60 Hz.

For Nvidia, this GeForce RTX 4080 is aimed at gamers equipped with a 4K monitor and who wish to play with the graphics settings at maximum.

Given the low number of monitors offering this kind of definition and display speed on the market, it is difficult to find this penalizing. This is a pity given the sum requested by Nvidia, if in the future monitors exceeding the limits of DisplayPort 1.4 were to become widespread.

For this test, we reused the same configuration as for our test of the RTX 4090.

Our usual Time Spy Extreme test from 3D Mark puts the graphics card to the test in 4K, but without using ray tracing. This allows you to get a first idea of ​​​​performance on “classic” 3D games using exclusively rasterization for their rendering.

The 3DMark software also offers a test dedicated to ray tracing which has brought many graphics cards to their knees. The RTX 4000 generation is holding up pretty well against it so far.

The RTX 4080 manages to display 82.69 frames per second on average on this very demanding test. For comparison, the RTX 3080 clocked in at 46.55fps and the RTX 3080 Ti delivered 54.61fps. We see here the significant gap allowed by Nvidia’s change of architecture, without even integrating the arrival of DLSS 3 on the RTX 4000s.

It also illustrates Nvidia’s lead over its main competitor. While waiting to see the results of the very promising Radeon RX 7000s, the Radeon RX 6900 XT only offered 31 frames per second on this test.

The Cyberpunk 2077 game continues to be the market benchmark for testing graphics cards thanks to its excellent support for ray tracing and the graphical complexity of its open world.

We ran the in-game benchmark multiple times with the graphics settings maxed out. First without DLSS, the card runs at 29 frames per second on average, an honorable result for a title so hungry for native 4K with ray tracing.

Since its release in 2020, Flight Simulator has been a benchmark for PC video games and its photorealistic rendering of the earth has a lot to do with it. This title is very resource intensive both in terms of the graphics card and the processor. On older generations, it could see its fluidity being limited by CPU performance.

With DLSS 3, which allows image generation only from the GPU, Nvidia can remove this limitation. We get a game that runs at 96 frames per second on average on a flight over Manhattan, one of the most greedy places in the game, with various weather conditions. Again, we’re running the game at 4K with “Ultra” graphics settings.

Red Dead Redemption 2 remains one of the benchmarks in video games for very realistic and greedy graphic rendering. With the options set to maximum and rendering in 3840 x 2160 pixels, the GeForce RTX 4080 runs the game at 92 frames per second on average.

Neither DLSS nor ray tracing is involved for this test.

Launched at the start of the console generation, Watch Dogs Legion uses one of Ubisoft’s latest graphics engines with extensive ray tracing support. Pushed to the maximum and in 4K, it is capable of lowering the performance of our GeForce RTX 4080 below the 60 frames per second mark: to 44 frames per second on average.

Fortunately, activating DLSS in balanced mode makes it possible to bring this up to 67 frames per second to obtain a smooth and always very beautiful game in the image.

The new iteration of Blizzard’s competitive FPS continues to grow in popularity and remains at the top of the charts for the most played games on console, for now.

It allows us to evaluate the performance of the RTX 4080 in a recent and competitive game. It is therefore necessary to have a maximum of images per second to ensure low latency and fluidity at all times.

Unsurprisingly, this is what it offers, even in 4K with the graphics options at maximum. The game runs at an average of 210 frames per second.

Fortnite seems unbreakable from its place as one of the most popular games in the world. He is also one of the representatives of competitive games in our test. We ran a custom map that simulates what we usually find in a game: movement, construction, action scenes, etc.

If Nvidia particularly highlights 3D creation on its 90 series such as the GeForce RTX 4090, the other graphics cards also have good capabilities in the field.

We ran Blender Benchmark to evaluate the performance of the RTX 4080. On the Monster stage, it manages to render 4213 samples per minute, 1892 samples for the Junkshop stage and 1794 samples for Classroom.

Like the RTX 4090, the RTX 4080 incorporates a dual AV1-compatible video encoding engine. This is very powerful since it means that compatible software can, in principle, render videos twice as fast by running the two engines in parallel.

Support for AV1 is also decisive for the future, as this format will eventually replace H.264 and HEVC in the years to come. It has the merit of being a free format and of offering better compression with equal image quality than its rivals.

During our test sessions, we measured a maximum consumption of 308W for the entire graphics card. On the Windows desktop, this consumption drops to 19W on average.

Contrary to what we can read here or there, we therefore find the same level of consumption as the GeForce RTX 3080. In other words, the RTX 4080 offers a significant performance boost at a level of consumption equivalent to the previous generation. A great feat from Nvidia and TSMC.

Where to buy The
Nvidia GeForce RTX 4080 at the best price?

There are no offers at the moment

At this price, Nvidia will have to deal with the Radeon RX 7000 whose tests are still awaited at the time of writing this article. Above all, the brand faces its own competition, the GeForce RTX 3000s are still widely available commercially.

Aroged: The Forbidden Sanctum expansion will add a roguelike mode to the role-playing game Path of Exile

#ArogedOffreMoi 3 months of Shadow with a supercharged option

What is the Special Pearl of Wisdom for in Genshin Impact?

In case you were in any doubt: the addition of Cyberpunk 2077: Phantom Liberty will be paid

Chained Echoes: the fantasy JRPG arrives in December on PC and consoles, even on Game Pass

Pokémon Scarlet and Violet: the RNG is “fixed” in the online, which ruins the PvP battles