Like every year, Qualcomm organizes its Snapdragon Summit to unveil its latest innovations. As a highlight, there is obviously the new Snapdragon 8 Gen 2 which will equip all the flagships of 2023. 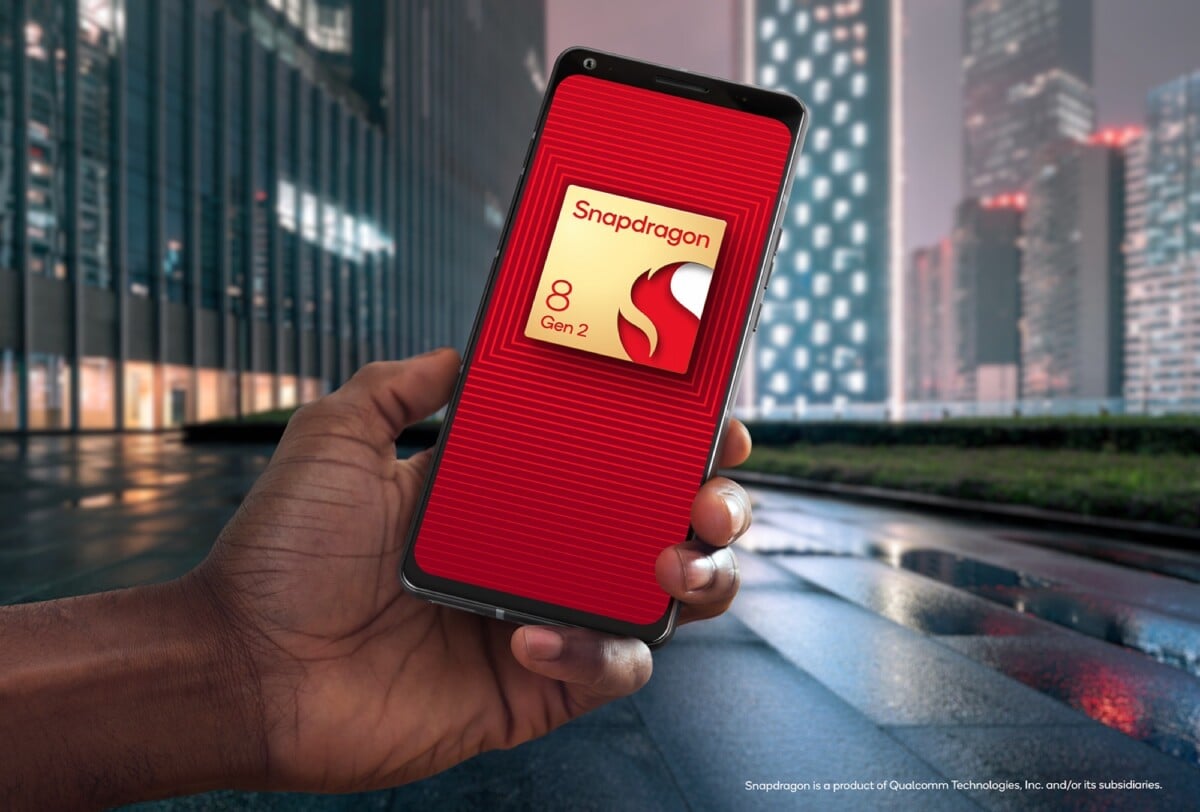 Each year, the ritual is repeated: Qualcomm presents with great fanfare the SoC that will equip the vast majority of flagships that will be released in the following months. The central chip of the smartphone makes it possible to draw a robot portrait of the capacities to be expected from future Samsung, Xiaomi and other OnePlus. Here comes the Snapdragon 8 Gen 2.

For its new chip, Qualcomm does not promise a revolution in CPU performance, even if the announced gain of 35% is significant, to focus on other more important improvements around. Remember that a SoC is a chip made up of many elements that will each have an impact on the use of your smartphone. 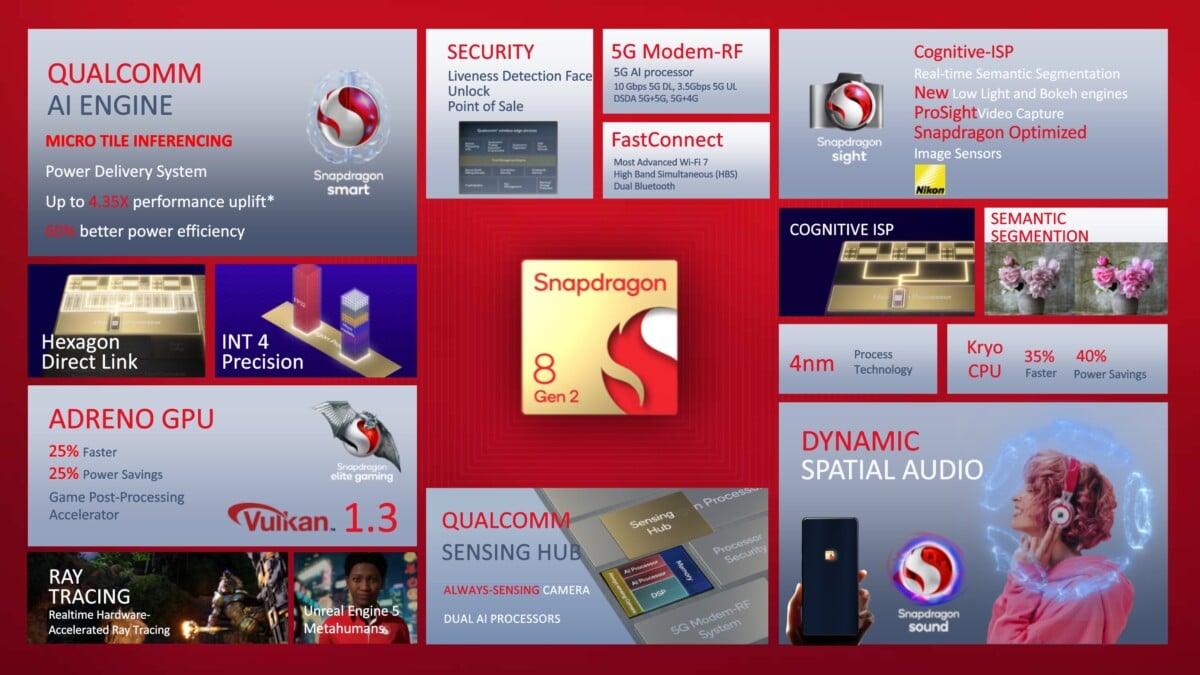 Thus, the Snapdragon 8 Gen 2 relies in particular on “Snapdragon Smart”, the name given to everything related to AI at Qualcomm. The firm announces a nice “up to 4.35 times more performance in AI”. What allow translations in real time faster and able to manage several languages ​​in parallel.

Obviously, AI will also play a role in photo processing alongside an improved ISP for the occasion. The dedicated photo and video engine to handle 200 MP photos and 8K HDR capture. Now, Qualcomm announces that it is able to better understand a photo by detecting faces, hair, clothing, the sky, etc., to then differentiate the image processing for each of these detected elements.

Qualcomm is also emphasizing the improvements made to its Adreno GPU which would gain 25% in performance. Above all, support for Vulkan 1.3 allows this Snapdragon to manage ray tracing natively and accelerated in hardware for the first time. Unreal Engine’s MetaHumans bluffs will also be supported.

AV1 support has been added in decoding to play videos up to 8K HDR at 60 frames per second all the same.

Finally, there is the connectivity, necessarily important on a chip intended for smartphones. Behind the improvements made to 5G, there is the arrival of support for Wi-Fi 7 and several improvements in Bluetooth. Wireless audio should in particular see its latency drop below 48 ms in video games.

The good surprise is that it won’t even be necessary to wait until 2023 to discover the first smartphones equipped with Snapdragon 8 Gen 2. Qualcomm plans to release the first products at the end of 2022. 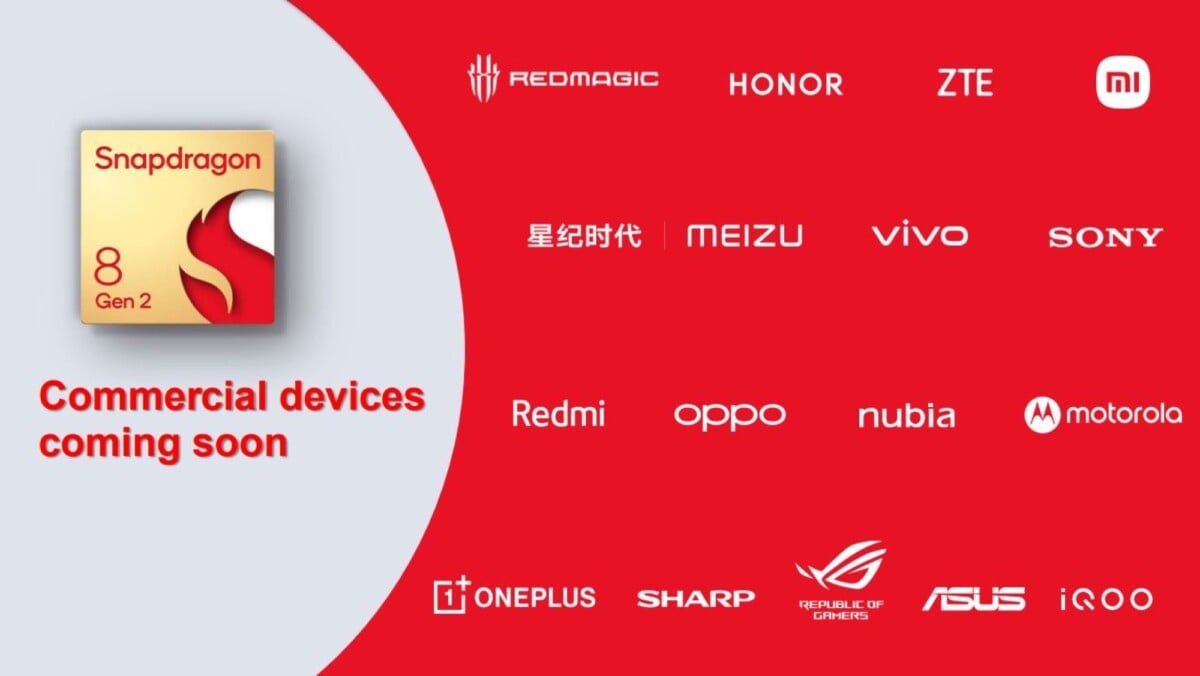 Several major brands such as Xiaomi, Sony, OnePlus and Asus have already signed up to equip this new chip on their next smartphones.

NB : Our reporter Cassim Ketfi is in Hawaii to cover the Snapdragon Summit 2022 as part of a press trip organized by Qualcomm.

Kasper Ruud became the first semi-finalist of the ATP Finals

Roguelike NecroBouncer Coming to PC via Steam on December 8th

Sonic: Lore manager to "connect the titles of the series more meaningfully"

One Piece Odyssey: Gameplay Trailer with Seven Minutes from Alabasta