Many years ago, specifically on November 15, 1971, the Intel 4004 was launched, which is considered the first complete CPU on a chip and the first commercially available microprocessor. The 4004 made it possible to build cheap home computers.

It all started with a pocket calculator. In 1969, the Japanese manufacturer Nippon Calculating Machine Corp. approached Intel to develop a series of integrated circuits for its technical prototype computer, the Busicom 141-PF. Original plans called for 12 custom chips, but Intel employees Marcian “Ted” Hoff, Stan Mazor, and Federico Faggin adapted the design into a set of four chips, including the 4004 Central Processing Unit (CPU), which was released in November 1971 was officially presented. The first advertisement for the new microprocessor, the 4-bit model 4004, appeared in the US magazine “Electronic News” on November 15, 1971. The chip ran at up to 740 kilohertz and was considered the first single-chip Processor that enables the construction of cheap home computers. It was developed by a small company that was founded just a few years ago by Gordon Moore and Robert Noyce: Integrated Electronics. 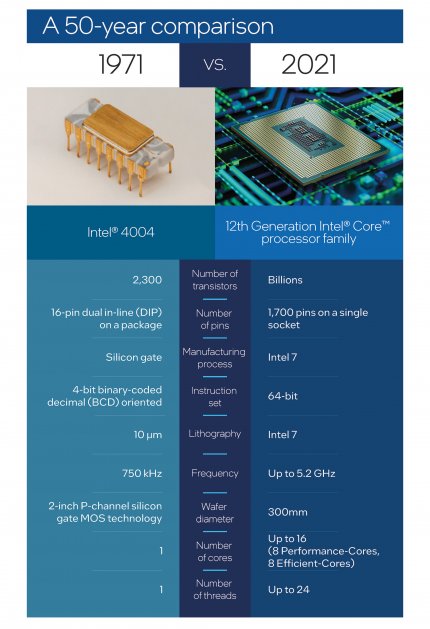 Intel Celebrates 50 Years 4004 (3) Source: Intel Before the fingernail-sized 4004 microprocessor, the same computing power could only be achieved with computers that filled entire rooms. “The 4004 was so revolutionary that it took Intel about five years to teach engineers how to build new products based on microprocessors,” says co-inventor Mazor on his 50th birthday. “Intel was ultimately very successful in this endeavor and the rest is history.”

“By 1970 it was clear that microprocessors would change the way we design systems, moving us from hardware to software. But the speed at which microprocessors evolved over time and were adopted by industry was really surprising,” said Federico Faggin, a former Intel engineer who developed and produced the Intel 4004 with Tedd Hoff and Stan Mazor.

“In 2021 we celebrated the 50th anniversary of the 4004 chip. Think of how much we’ve accomplished in the last fifty years. This is a sacred moment for technology. It’s what really kickstarted computing!” ” – Pat Gelsinger, Intel CEO

In 1971, the Intel 4004 made in 10 microns had just over 2,300 transistors. For comparison, in 2010, an Intel Core processor with a 32nm processor chip and second-generation High-K Metal Gate silicon technology already had 560 million transistors. Today we are in the range of several billion. For comparison: The current Intel CPUs clock well beyond the 5 GHz mark – the Intel 4004 managed 750 kHz.

On the occasion of his 50th birthday, there was an exciting campaign by Roman Der8auer, who owns two 4004 CPUs and, in view of the anniversary, took the opportunity to sell the not so cheap processors (200 euros for the “dark” version, approx. 2,000 euros for the white variant) in the video. The plan was to put the 4004 under the scanning electron microscope – and in the video a variant is also “decapitated” or ground down so that the chip can be seen. However, the experiment did not quite work out as desired.

PlayStation VR2: pre-orders of the new virtual reality viewer for PlayStation 5 are open from GameStop

Denis LUKASHOV: "We have no right to make mistakes"

Since the beginning of the year, the cost of NVIDIA inventory has increased mainly due to components