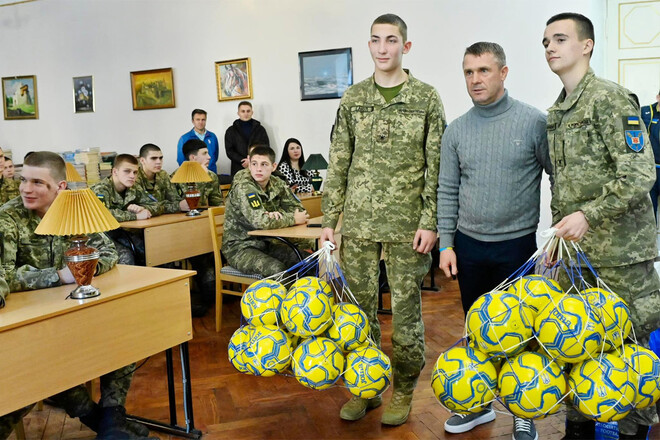 Former UPL President Vladimir Geninson said: “Sergey Rebrov came to Kyiv with a volunteer mission. First I visited the Main Military Clinical Hospital. The military and medical staff were pleasantly surprised by the visit of the titled athlete. In turn, Sergey presented footballs with his autographs and sportswear, willingly took pictures and sincerely thanked the defenders: “Guys, you are all heroes! Every day you and your brethren prove it! You have already liberated the Kharkiv region and Kherson, which gave all Ukrainians a sense of happiness and pride. We are proud of you!

After the military hospital, Sergei Rebrov visited the Kiev Military Lyceum named after Ivan Bohun. During the conversation with the pupils of the Lyceum, Sergey Stanislavovich noted: “You are the future of our country, our Armed Forces of Ukraine. Learn well from your teachers, be physically and mentally hardened, football will help you with this. Especially – in understanding the importance of the unity of the team, mutual assistance and the attitude of the interests of the team above personal ones. In memory of the meeting, Rebrov presented the future soldiers with soccer balls and equipment, which they will try out in the game on the newly built football ground at the Lyceum.”

Journalist Roman Bebekh: “Al Ain coach Serhiy Rebrov returned to Kyiv and visited the Main Military Clinical Hospital to visit Ukrainian soldiers. Sergei Stanislavovich brought gifts to our defenders and sincerely thanked them. In addition to a visit to a military hospital, Rebrov also visited the Ivan Bohun Kyiv Military Lyceum, where he already talked with future soldiers. Glad to see you at home, Sergey Stanislavovich!”