The Need for Speed ​​Unbound Soundtrack kicks off with A$AP Rocky and Shirin David.

Electronic Arts Inc. and Criterion Games announced the high-profile Need for Speed ​​Unbound soundtrack, to be released worldwide on December 2nd. The soundtrack was specially created for street racing and features songs by hottest international artists from the hip-hop and electronic music worlds.

The expansive tracklist features songs from global talent such as A$AP Rocky, Brodinski, SCH, Lous and the Yakuza, Alina Pash, Slikback, Villano Antillano, COUCOU CHLOE and Balming Tiger. As a local talent, Shirin David is entering the race with her hit “Be a Hoe/Break a Hoe” (feat. Kitty Kat). The official playlist can be listened to via Spotify and Apple Music.

This star roster gives players worldwide the opportunity to discover new artists as they drift through the streets of Lakeshore. For the first time in Need for Speed ​​history, players can customize their cars with decals from various stars of the soundtrack.

“I love fast and flashy cars, I love Need For Speed ​​and as of today I love being a part of it,” says hip-hop icon Shirin David.

Hardly any other musician embodies self-determination like her – Shirin breaks everyday norms with her music and her unique style, and is therefore the perfect muse for Need for Speed ​​Unbound.

Artist, entrepreneur, actor and fashion icon A$AP Rocky with his creative agency AWGE has presented the new track “Sh*ttin’ Me” in the Need for Speed ​​Unbound reveal trailer, which will not be heard anywhere outside of the game. The song and music video for A$AP Rocky’s “Sh*ttin’ Me” will be released December 2nd.

Also making their tracks on the soundtrack are AWGE artists Kelvin Krash, slowthai, Smooky MarGielaa, Thoto, ICYTWAT, and A$AP Mob favorites A$AP Ant and A$AP Ferg. A$AP Rocky appears in-game as the leader of the Takeover Events – a new repeatable precision driving mode that brings the community together to take over parts of the city with style rather than sheer speed.

The soundtrack also features original cross-genre tracks by Brodinski, the French electronic and hip-hop producer and founder of French electro label Bromance Records. Brodinski has deep ties to Atlanta’s underground rap community and has dedicated his career to nurturing the area’s young, talented rappers. His collaborations with Tohji, JMK$ and Peewee Longway are part of the Need for Speed ​​Unbound soundtrack. Brodinski’s soundtrack will be available on Spotify starting December 2nd. 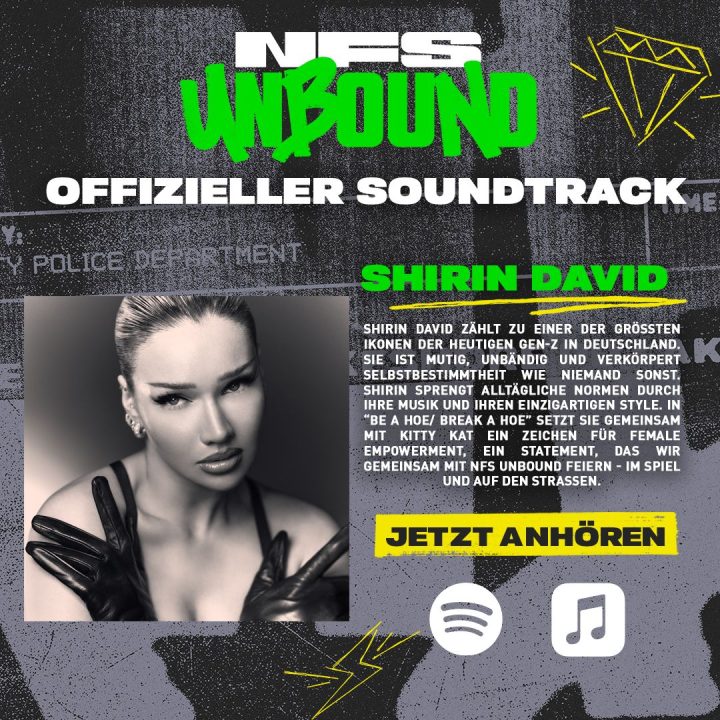 All artists including songs of the official, licensed soundtrack at a glance:

Botany
She Will Be

Buku
Front To Back

Shirin David, Kitty Kat
Be a Hoe/Break a Hoe

Tkay Maidza
Where Is My Mind?

Here is the soundtrack on Spotify:

When will the Playstation 6 be released? Sony gives an outlook

Destiny 2: Next Dungeon will be released on December 9th