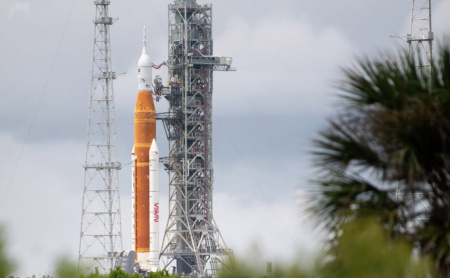 After many cancellations and reschedules, NASA has finally completed the launch of the Space Launch System rocket as part of the Artemis I mission. Technical problems and weather conditions have hampered previous attempts.

For the first time, the @NASA_SLS rocket and @NASA_Orion fly together. #Artemis I begins a new chapter in human lunar exploration. pic.twitter.com/vmC64Qgft9

Preparations for the launch of the SLS rocket were carried out for more than ten years. This rocket launch marks NASA’s return to manned missions to the moon. Although the first mission of Artemis I takes place without astronauts on board. Its main goal is to test the space launch system of the rocket and spacecraft to make sure they are safe for astronauts. After launch, the Orion capsule will spend more than a month in flight, looping around the Moon in a long orbit, and then return to Earth, splashing down in the Pacific Ocean off the coast of California.

The launch of the Space Launch System was successful. Shortly after the launch, the boosters separated from the rocket, and then the upper stage. In the future, the spacecraft should deploy solar panels and go flying to the moon.

Interested users can view the flight of the Orion spacecraft in real time using a special section of the NASA Artemis Real-time Orbit Website (AROW).

During the #Artemis I flight test, our @NASA_Orion spacecraft will travel to 40,000 miles beyond the Moon, farther than any crewed missions have flown: https://t.co/CL5LXUjDbZ

Artemis 1 is the first test flight of the Orion spacecraft (the old name for the Orion EM-1 mission) using the SLS rocket. This is a demonstration flight with an exit to a lunar orbit and a return to Earth to test the performance of a ship passing without a crew. Orion is scheduled to spend three weeks in space, including three days in retrograde lunar orbit. The duration of the mission is 42 days. It will end with a splashdown of the ship off the coast of Florida. If everything goes according to plan, Orion will return to Earth on December 11th.

Read more about the Artemis program and the details of the first flight in our previous article.

NASA launches SLS for the first time, the $11 billion super-heavy launch vehicle in development since 2011 for expeditions to the Moon and Mars [Обновлено: запуск отменили]

Rainbow Six Siege: Ready for the Major in Jönköping? Here are the participating teams

The secret of geniuses. The doctor told how Messi and Ronaldo keep fit